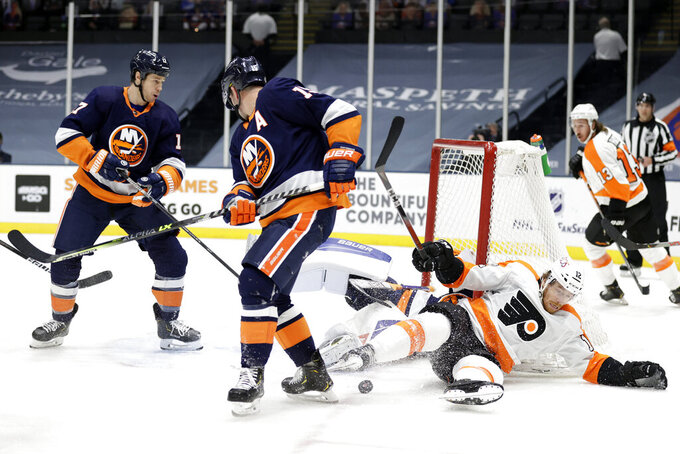 “We were moving our feet, we were getting in on the forecheck, we were making it hard on their D,” Cizikas said. “We were moving the puck quick and when we did have breakdowns, Sorokin made some huge saves at some key times.”

Joel Farabee scored for Philadelphia, which has lost seven of its last 11. Carter Hart, who came in with a 3.70 goals-against average and .880 save percentage, finished with 22 saves.

The teams conclude their three-game series Monday at Philadelphia.

The Islanders won for the 12th time in their last 15 (12-2-1) and improved to 13-1-2 at home. After a 4-3 loss to the Flyers on Thursday night, the Islanders came back with balanced scoring effort and key contributions throughout the lineup in their fifth game since captain Anders Lee's season ending injury.

“We’ve said it for a couple of years, our depth up front and the back end has been really good,” Beauvillier said. “A lot of guys have been stepping in the lineup and doing the job. It’s really good for us especially without Leesy in the lineup. It’s part of our identity and we showed it again tonight.”

Cizikas had a chance for his first career hat trick, but his backhand try in front went wide about 4 1/2 minutes into the third.

Beauvillier made it 5-1 at 9:45 of the final period after he deflected a pass from behind the net by Philadelphia defenseman Nate Prosser. The puck went to Brock Nelson at the right side and he tapped back to Beauvillier, who quickly beat Hart for his third.

Bailey capped the scoring after intercepting a pass from behind the net by Hart and putting it into the open net for his fourth with 4:14 to go.

“We know what we had to do to beat these guys and we did it for 60 minutes and it paid off,” Beauvillier said. “We didn’t really play on our heels. We kept going at them in the third and got two goals out of it. It’s a pretty good bounce-back win for us today.”

New York outshot Philadelphia 13-9 in the first, scoring the first four goals — including three in a span of 3:50.

“Definitely puts a lot of pressure on us to try to chase games,” the Flyers' Travis Konecny said. “That’s definitely not the way we want to play. It has to stop and it has to be fixed now because it just can’t continue. It’s hard to play that way. I think everyone knows what they have to do better. We just need to keep working at it.”

With the Islanders on the power play, Pageau knocked in the rebound of a shot by Wahlstrom to put the Islanders up 1-0 at 6:11. It was Pageau's 10th of the season and 99th of his career.

Eberle doubled the lead just 1:50 later. With several players scrambling for the puck in front of the Flyers' net, Eberle skated in and fired it past Hart for his 10th.

Cizikas made it 3-0 at 10:03 as he skated in and fired a shot from the left faceoff dot and beat Hart on the glove side.

Cizikas padded the lead with his second of the night and sixth of the season with 4:35 remaining in the opening period as he got up after taking a hit in the right corner, skated in and quickly scored off a back pass from Hickey..

Farabee got the Flyers on the scoreboard on a 2-on-1 with 2:08 left as he beat Sorokin from the right circle for his 13th — tying James van Riemsdyk for the team lead.

With D Noah Dobson still out due to COVID-19 protocol, Hickey played in his first NHL game for the Islanders since the 2019 playoffs. He had three assists while appearing in 14 games for Bridgeport of the AHL last season.

Hickey said the mental focus in his comeback from injuries and the death of his brother was tougher than the physical aspect.

“It’s a lot more exhausting than trying to stay physically ready, trying to keep your head in. You wonder and doubt creeps in," he said. "I’m proud of the work I put in. I've got a great support system and that helps, and support from my teammates.”

Hickey's assist on Eberle’s goal in the first period was his first point since Dec. 6, 2018, against Pittsburgh. He finished with his first multipoint game since Jan. 13, 2018, at the New York Rangers.

Flyers C Sean Couturier was a late scratch due to a lower-body injury. Michael Raffl took his place in the lineup.

The Islanders were scheduled to open a five-game trip when they visit the Flyers on Monday night. That was to be followed by two-game series at Boston and Pittsburgh, but Tuesday's game has been postponed due to a COVID-19 outbreak with the Bruins. The status of Thursday night's game is still uncertain.