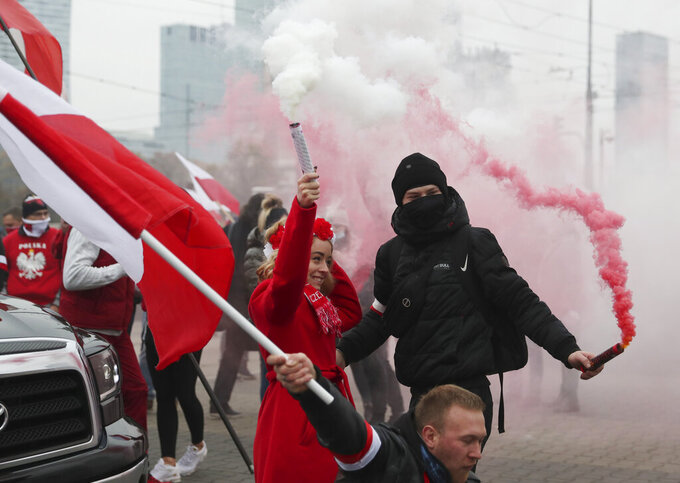 Protesters burn down bengal fire as they attend in the annual Independence Day march organized by far-right groups for participants to be inside cars or motorbikes because of the coronavirus social distancing, ready for the start of the event in Warsaw, Poland, Wednesday, Nov. 11, 2020. The march that marks Poland's sovereignty regained after World War I has often led to clashes with opponents. (AP Photo/Czarek Sokolowski)

WARSAW, Poland (AP) — Polish police used tear gas and rubber bullets in clashes with far-right supporters Wednesday during an annual Independence Day march attended by thousands in Warsaw that went ahead despite a ban on public gatherings due to the pandemic.

Many participants turned up in cars and on motorbikes to observe social distancing. But a few thousand others marched on foot, holding up downtown traffic for hours.

Some threw firecrackers, stones and bottles at police in riot gear and into windows with LGBT rainbow flags or signs of anti-government sentiment. An apartment went on fire, but firefighters put it out. No one was hurt there.

During the clashes a 74-year-old photographer was injured in the face with a police rubber bullet.

Poland's right-wing government has been promoting and sometimes even joining the march and has shown acceptance of the far-right groups ever since it took power in 2015.

Warsaw Mayor Rafal Trzaskowski said the cost of the damage would be known Thursday.

“Clashes with the police, damage, trains held up, probably a (case of) arson, this is how the far-right, overindulged by the ruling team, is observing Independence Day," Trzaskowski said on Facebook.

A lawmaker for the opposition Civic Coalition, Michal Szczerba, said on Twitter he will request a prosecutors' investigation into the fire at the apartment.

“Bandits caused a fire at an apartment,” Szczerba said. “The full penal responsibility and all damages rest on the organizers of the illegal gathering.”

Another opposition lawmaker, Paulina Hennig-Kloska tweeted to say: “Give us back our holiday and the joy that should accompany it. This is crime, not patriotism.”

Warsaw police reported a number of arrests and also said some injured police were hospitalized. Details are to be released Thursday.

The march came at a time when thousands of Poles have been holding daily nationwide protests against the government that backed the tightening of an already strict abortion law last month. The protesters are also demanding more rights for LGBT people and want the government to resign.

Organized by far-right groups, massive Independence Day marches have often led to clashes with leftwing groups and the police.

Other Independence Day observances on Wednesday included President Andrzej Duda and other leaders attending a Catholic Mass in Warsaw and a ceremonial changing of the guard at the Tomb of the Unknown Soldier.