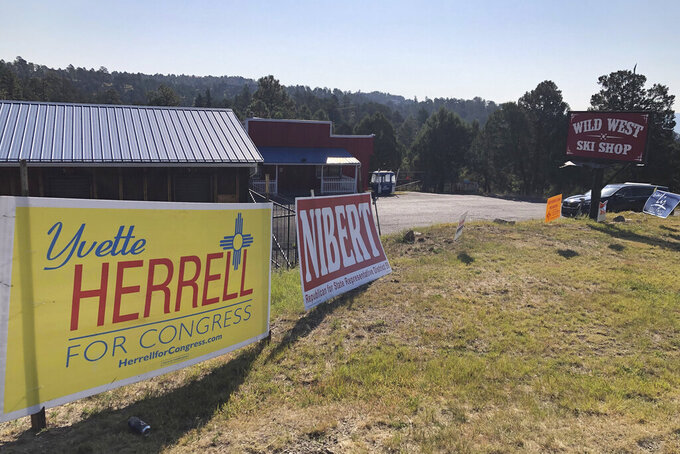 RUIDOSO, N.M. (AP) — Pockets in the Sierra Blanca mountain range are packed with tourists searching for an outdoor getaway of fishing, hunting, and eventually skiing. But this year the pandemic and New Mexico health orders have forced some shops and businesses in the New Mexico village of Ruidoso to close, creating uncertainty for a place so vested in visitors.

“People are worried,” said Cynthia Black, 65, a retired geophysicist who lives in nearby Nogal. “We just don't know what's going to happen.”

New Mexico is on the verge of electing the nation’s largest U.S. House delegation made up entirely of women of color, but the close race in the state’s southern district — where Ruidoso sits — is grabbing the most attention.

Democratic U.S. Rep. Xochitl Torres Small is seeking to hold her traditionally GOP-leaning seat against Republican challenger Yvette Herrell in a rematch of 2018 that will be decided by turnout. In her first term, Torres Small has tried to portray herself as a moderate who bucks her party on certain issues, like fracking and gun control.

Herrell, who lost to Torres Small by less than 4,000 votes, has dismissed that image and has worked to link Torres Small to Democratic House Speaker Nancy Pelosi — a name that evokes anger among conservative Republicans like Black. Herrell also has suggested she rightfully won the 2018 race and questioned how Democratic stronghold Doña Ana County counted last-minute absentee ballots that flipped the seat to Torres Small.

“We feel that this seat was stolen,” said Black, a Herrell supporter. “And we intend to get it back.”

To win the seat, however, Republicans will have to overcome a major fundraising disadvantage as Torres Small has outraised Herrell, who had to go through a nasty GOP primary just to get a rematch in the general election.

Outside super PACs on both sides are drowning the airwaves in the district that sprawls from the oil-rich Permian Basin to the east to poor, Mexican American communities along the U.S.-Mexico border. Political action committees can raise and spend unlimited amounts of money, including from corporations and unions, to campaign independently for candidates for federal office. Its activities must be reported to the FEC, but are not otherwise regulated if not coordinated with the candidate or campaign.

While both candidates have stressed the importance of the state's oil and gas industry, they rarely discuss poverty and issues of race in one of the most Hispanic congressional districts in the country.

New Mexico is assured an all-female delegation to the U.S. House next year after Democrats and Republicans nominated women in all three congressional races.

Leger Fernandez and Republican engineer Alexis Johnson, both based in Santa Fe, are vying to become the first woman to hold the Democrat-leaning 3rd District seat since its creation in 1983.

Johnson has campaigned on an anti-abortion platform that emphasizes limited government in a district with strong currents of Roman Catholicism. She was fined in July on the central public square in Santa Fe for violating a statewide facemask requirement designed to limit the spread of COVID-19.

Leger Fernandez held a lopsided fundraising advantage as she ran on support for new investment in renewable energy and a transition toward a single-payer health care system and away from employer-based insurance. Registered Democrats outnumber Republicans nearly 2-1 in the district that overlaps portions of the Navajo Nation and a long list of Native American communities.

Democratic U.S. Rep. Debra Haaland, one of the first Native American women to serve in Congress, is seeking reelection to a second term against Republican challenger Michelle Garcia Holmes for the Albuquerque seat.

Garcia Holmes, a former police detective, has embraced Trump’s law-and-order agenda as federal agents were deployed to Albuquerque and blamed her opponent for failing to ensure internet access in remote areas.

Haaland, a former chairwoman of the state Democratic Party, has campaigned as a vocal critic of the Trump administration on issues including environmental protection and as a “fierce advocate" for racial and economic justice.