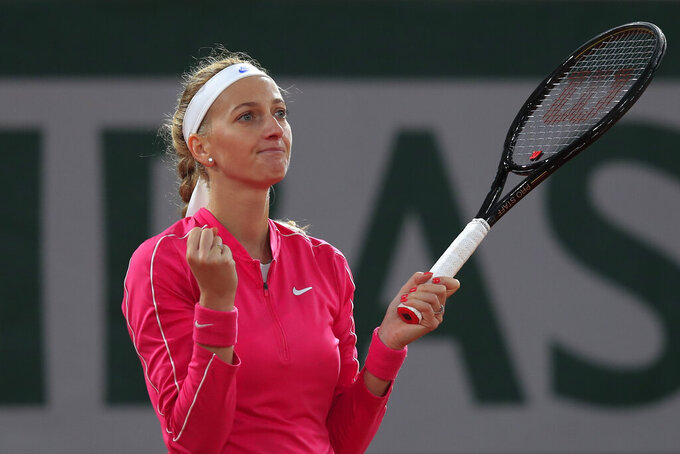 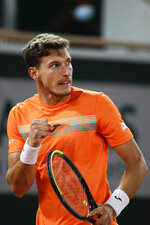 PARIS (AP) — After Sofia Kenin dropped the opening set in the French Open’s fourth round Monday, her father, Alexander, who is also her coach, switched seats in the stands, plopping himself down right next to her opponent’s coach.

So much for social distancing amid a pandemic.

Whether the elder Kenin’s move, so noticeable in the sea of empty beige seats at Court Philippe Chatrier, actually influenced the outcome can’t be known with any certainty — the chair umpire did give a warning for coaching, which isn’t allowed during Grand Slam matches; the 2020 Australian Open champion said her dad merely helped by “motivating” — things did turn around soon afterward.

Never before a quarterfinalist at any tour-level clay-court tournament, Kenin reached that stage at Roland Garros by making a key adjustment, taking balls sooner and leaving Fiona Ferro less time to operate in the 21-year-old American’s 2-6, 6-2, 6-1 victory over the last player from France in either singles bracket.

“First of all, I mean, I don’t know, like, why HER coach sat in that section,” said Kenin, who is seeded No. 4, while the 49th-ranked Ferro was unseeded.

“On the right, it’s (for) the higher seed. I would imagine that he would be sitting on the other side. I didn’t really understand why he was sitting there,” the 21-year-old American said, shrugging. “Yeah, I mean, my dad sat there. He tried to help me. ... I mean, he just sat there — and it worked. There’s nothing much to discuss about that.”

As for Emmanuel Planque, Ferro’s coach?

“At the end of the match,” Ferro said with a laugh, “he told me, ‘You didn’t manage to get rid of Sofia, but I couldn’t get rid of her dad.’”

A year ago in Paris, Kenin signaled to the world what she was capable of, upsetting Serena Williams in the third round.

She needed to wait a day to find out who she'll play next, because the match between No. 30 Ons Jabeur of Tunisia and Danielle Collins of the U.S., scheduled for open-air Suzanne Lenglen Court, was postponed by rain.

The other quarterfinal in that half of the draw will be two-time Wimbledon champion Petra Kvitova against Laura Siegemund.

The men’s quarterfinals established Monday are both rematches: No. 1 Novak Djokovic against No. 17 Pablo Carreño Busta, and No. 5 Stefanos Tsitsipas against No. 13 Andrey Rublev.

Djokovic dealt with what amounted to the closest thing to a challenge he’s faced so far in the tournament in his 6-4, 6-3, 6-3 win over No. 15 seed Karen Khachanov — the 2016 champion has dropped a total of 25 games in four matches. What drew attention was what the 17-time Grand Slam champion termed “very awkward déjà vu.”

It was, to be perfectly clear, entirely an accident, more of a fluke than anything else, when Djokovic stretched wide of the doubles alley to try to return a first-set serve, the ball ricocheting off his racket frame and into the head of a seated line judge.

Still, different as it was, the moment conjured memories of the U.S. Open, where Djokovic was disqualified from his fourth-round match against Carreño Busta for striking a ball that unintentionally hit a line judge in the throat. That one happened after Djokovic dropped a game in the first set; he hit a ball in anger while walking to the sideline.

On Monday, it happened in the course of play, and Djokovic immediately went over to check on the man, who shook it off and signaled a thumbs-up. Djokovic’s match continued apace, putting him in the French Open quarterfinals for the 11th consecutive year, extending a record he — no, not 12-time champion Rafael Nadal — already held.

“I mean, obviously because of what happened in New York, people, I guess, are going to make (a) story out of this,” Djokovic said. “It has happened to me, and to many other players, in the last 15 years that I’ve been on the tour."

This victory moved Djokovic into his 47th Grand Slam quarterfinal. Carreño Busta got to his fourth, and second at Roland Garros, by beating 186th-ranked qualifier Daniel Altmaier 6-2, 7-5, 6-2.

Djokovic is seeking a second French Open championship and 18th major trophy overall. Among men, only Federer, with 20, and Nadal, with 19, have won more.

Tsitsipas and Rublev both dropped the first two sets they played in Paris last week — and now both are making a French Open quarterfinal debut.

Their meeting Tuesday comes a little more than a week after Rublev beat Tsitsipas in three sets in the final of the Hamburg Open on Sept. 27 — Day 1 of the French Open.

“It is very important for me to take this opportunity and fight harder this time, maybe do something better,” Tsitsipas said. “I know he’s a tough cookie.”