Cochran-Siegle skis to US Olympic medal 50 years after Mom 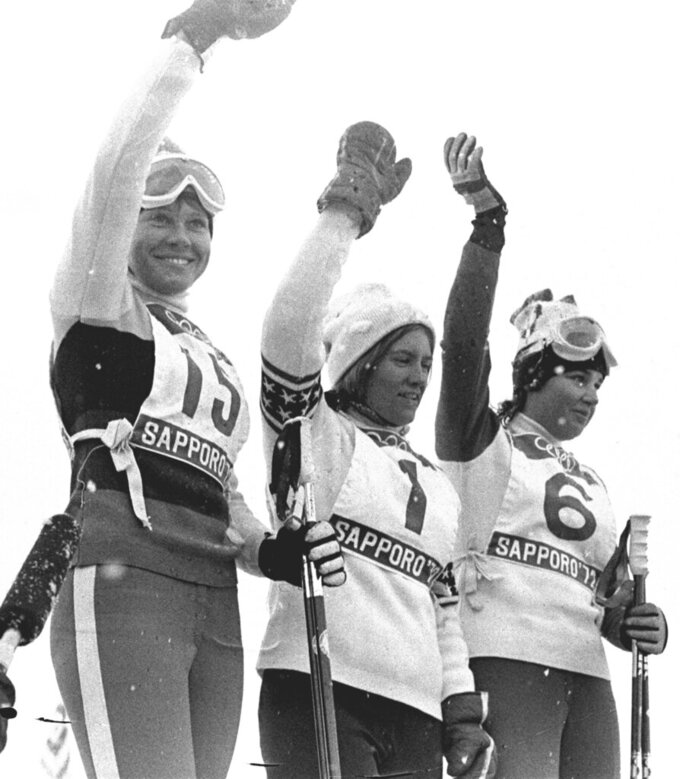 FILE - Barbara Ann Cochran, center, of the United States, winner of the Winter Olympic women's slalom gold medal, stands with Florence Steurer (15), the bronze medalist, and Daniele Debernard (6) the silver medalist both from France, in Sapporo, Japan on Feb. 11, 1972. Fifty years after his mom, Barbara Ann, won the gold in slalom, Ryan Cochran-Siegle is contending for a medal in the men's downhill that will open the Alpine skiing program of the Beijing Games on Sunday.(AP Photo/ Sal Veder, File)

BEIJING (AP) — As Ryan Cochran-Siegle set off at around noon Tuesday for a super-G run that would earn a silver at the Beijing Games — the first Olympic Alpine medal for a U.S. man since 2014 — it was around 11 p.m. Monday night back home in Starksboro, Vermont (pop. 1,756).

So his mother, Barbara Ann Cochran, grabbed a laptop and settled into bed in her pajamas to keep tabs on how the boy she put on skis at age 2 would fare.

Mom, you see, came from the “Skiing Cochrans” family of Olympians, and was the slalom champion at the 1972 Sapporo Games. She knows all about what it takes to succeed on this stage, all about what goes through a racer’s mind at the start, middle and end of a high-velocity trek down the glassy side of a mountain with history in the offing.

“I felt pretty calm until a few people before him. Then I got those butterflies and started getting pretty nervous. I was yelling as he was going down, ‘Go, Ryan! Go, Ryan!’ I was loud. I woke my daughter up,” Cochran said with a chuckle during a telephone interview interrupted occasionally so she could listen to what was being said about Ryan's result on the American broadcast. “And then came a ton of different emotions. Excitement. Nervousness. Proud of what he’s doing — and what he’s come back from.”

That latter phrase encompasses quite a bit for the 29-year-old Cochran-Siegel, or “RCS,” as he’s known to everyone in skiing. He's always been fast, but there were so many months, even years, at a time away from the World Cup circuit because of injuries, most notably a series of knee operations after tearing ligaments and damaging cartilage at the 2013 world championships and a fractured vertebra after a crash in January 2021.

“I just made sure I was giving myself as much of an opportunity to get back and trust that I was capable of being among the best,” Cochran-Siegel told The Associated Press, a medal hanging from a blue ribbon around his neck, four years after he entered four races at the Pyeongchang Olympics with a best result of 11th.

“As a ski racer, you work up the levels and you become better, rankings-wise. Then you achieve a World Cup podium. And your first win," he said, referring to key results that arrived in December 2020. "I realized that, mentally, I had the right stuff. It was just a matter of having my body 100%.”

That's now the case. Which helps, of course, when his bright blue helmet, matching Tuesday's sky at the Yanqing Alpine Skiing Center, is rocking this way and that and snow sprays in his wake during a hard-charging and clean trip. His shoulders knocking aside gates, Cochran-Siegle finished in 1 minute, 19.98 seconds, just 0.04 behind Matthias Mayer, who earned his third career Olympic gold medal for Austria, second in a row in super-G.

Unlike Mayer's success, Cochran-Siegle's performance on this day, on this stage, was tough to predict, given that he's currently 11th in the World Cup super-G standings.

“He just made better turns than anyone else out there,” said Jesse Hunt, U.S. Alpine director.

“Smooth and clean, which is the name of the game for him,” said Forest Carey, head mean's coach for the U.S. ski team.

To think: Cochran-Siegle was, to use Carey's phrase, “down in the dumps,” after being 41st-fastest in Friday's second downhill training run at a course known as The Rock.

Then came a 14th-place showing in Monday's downhill race.

Ah, but Cochran-Siegle noticed Tuesday morning that the manufactured snow near the top of the slope was melting a tad, thanks to temperatures that topped 15 degrees Fahrenheit after being close to zero recently. That, he said, meant he “could be confident and really just push” and “increase my aggressiveness.”

That matched a message from teammate Travis Ganong at a meeting the Americans held Monday night.

“All of us were pushing really, really hard, and we all had mistakes, and we didn't have a good result,” said Ganong, who went from 20th in the downhill to 12th in the super-G. “But the mentality and the mindset of that style of skiing is what it takes for medals. So I told the guys: ‘You just need to do the same thing (Tuesday). We’re shooting for medals. We’re all really, really good skiers, and on any given day, it can all come together.’ Ryan really took that to heart.”

Cochran-Siegle woke up Tuesday to a text from his mother, as he usually does on race days.

The gist: “I just hope you know how much people love you and are cheering for you, no matter the results you get.”

After the super-G, a U.S. ski team spokeswoman lent Cochran-Siegle her phone so he could FaceTime with a teary-eyed Mom.

Friday marks exactly 50 years since her Olympic victory. Wednesday marks exactly a year since her son's neck surgery; he was allowed back on skis in May — under doctor's orders to avoid falling — and began training in earnest in August.

“These injuries, for a lot of people, would have been career-ending,” Cochran said. “He didn’t want it to end.”

Instead, everything led to Tuesday in China, a Monday in Vermont, where a woman shouted and clapped from half a world away, while a moment her son hoped would arrive actually did.

“Just sharing these moments with family is so important. Obviously they can't be here, but they’re still a part of it," Cochran-Siegle said. "I can't wait to be home and share it with them.”