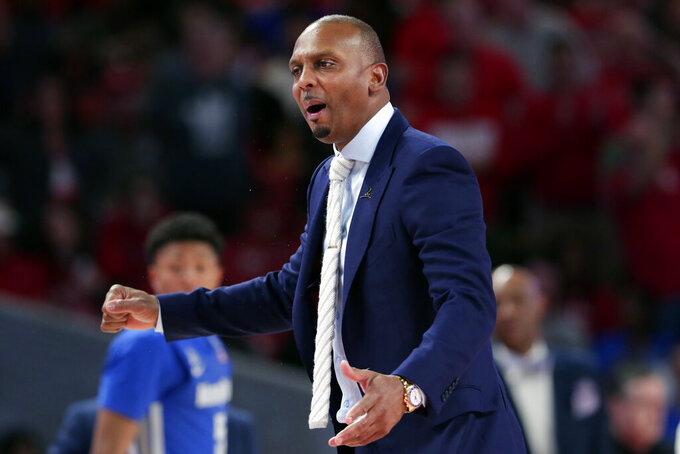 FILE - Memphis head coach Penny Hardaway questions a foul call during the second half of an NCAA college basketball game against Houston, Sunday, March 8, 2020, in Houston. As the NCAA gets set announce its plans for the 2020-21 college basketball season, there are clear precedents and blueprints in place should it decide to go the bubble route. “Maybe do it for maybe a week or two at a time, playing a certain amount of games and getting retested after you come back or something like that,” Memphis coach Penny Hardaway said. "It’s possible, it’s not going to be easy.”(AP Photo/Michael Wyke, File)

INDIANAPOLIS (AP) — With the coronavirus pandemic already forcing changes for college basketball, a bubble may be brewing in Indianapolis.

The all-inclusive price starts at $90,000 per team and would cover 20 hotel rooms per traveling party, testing, daily food vouchers ranging from $30-$50 and the cost of game officials. Sports Corp. President Ryan Vaughn said the price depends on what offerings teams or leagues choose.

“The interest has been high,” Vaughn said. “I think as conferences figure out what conference and non-conference schedules are going to look like, we're we’re a very good option for folks. I would tell you we've had conversations with the power six conferences, mid-majors, it's really kind of all over the Division I spectrum.”

Small wonder: The NCAA this week announced teams could start ramping up workouts Monday, with preseason practices set to begin Oct. 14. Season openers, however, were pushed back to Nov. 25 amid wide-ranging uncertainty about campus safety and team travel in the pandemic.

There is already scrambling going on and some of the marquee early-season tournaments have already been impacted.

The Maui Invitational will be moved from Hawaii to Asheville, North Carolina, with dates still to be determined and organizers clear that everyone involved “will be in a bubble environment that limits their movement and interaction outside the venue." The Batttle 4 Atlantis has been canceled. The Cancun Challenge will be held in Melbourne, Florida, not Mexico.

More changes almost certainly will be coming, including what to do with the ACC-Big Ten Challenge.

“I think we’re past the guesswork on whether we play 20 conference games or more than that,” Purdue coach Matt Painter said Friday. “We’re trying to get everybody set like in terms of MTEs (multi-team events), figuring out when to play the ACC-Big Ten challenge.”

Painter, who was part of the NCAA committee that recommended how to start the season, noted part of the uncertainty stems from differing protocols imposed by campus, city and state officials.

In Indianapolis, Vaughn believes the convention center, nearby hotels, restaurants and downtown businesses, many within walking distance of the venue, could safely accommodate up to 24 teams. The 745,000-square foot facility would feature six basketball courts and two competition courts.

Anyone entering the convention center would undergo saliva-based rapid response testing, which would be sent to a third-party lab for results. Others venues could be added, too, potentially with more fans, if the case numbers decline.

If there is a taker, the event also could serve as a dry run for the 2021 Final Four, also slated for Indy.

“It’s not going to hurt," Vaughn said. “I can tell you all the planning we're doing right now is the same for a Final Four that's been scheduled here for any other year. But it would be nice to have this experience under our belt to see if it can be done."