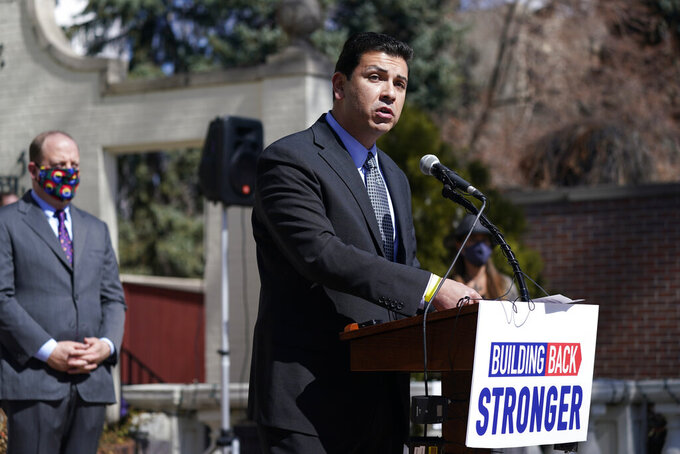 Senate President Leroy Garcia speaks, as Colorado Gov. Jared Polis, left, listens, during a news conference outside the Governor's mansion Wednesday, March 10, 2021, in Denver. Leaders from both the Democratic and Republican parties outlined the plan to spend $700 million over the next 18 months on job-creating transportation programs, sustaining a multibillion dollar agriculture industry and delivering critical aid to small businesses hit hard by the effects of the coronavirus over the past year. (AP Photo/David Zalubowski)

Polis and top Democratic and Republican lawmakers outlined their spending vision at a news conference. The $700 million comes from unexpected state revenue that surpassed expectations after lawmakers cut more than $3.5 billion from the state budget last year.

The one-time spending over the next 18 months is intended to sustain small businesses, a farming economy battered by uncertain markets, the pandemic and sustained drought, worker training for those losing jobs in fossil fuel industries and in long-delayed infrastructure projects, Polis said. It follows $300 million in emergency spending the legislature authorized during a special session last year.

It doesn’t take into account — for now — billions of dollars' worth in federal funds that are forthcoming to Colorado under a whopping $1.9 trillion relief package passed by Congress on Wednesday.

Legislation on the latest state stimulus must focus on three objectives: roads and bridges, getting people back to work and getting students back to school, said Republicans Chris Holbert and Hugh McKean, minority leaders of the state Senate and House, respectively.

“Those three pots affect every single family in this state. We will heartily encourage sticking to those three pots,” Holbert said. McKean noted that Colorado must replenish a state unemployment trust fund depleted by benefits claims during the pandemic. The fund has been sustained with federal aid, as it was during the Great Recession.

__The plan includes $170 million for infrastructure, roughly $130 million for farming and rural communities, at least $50 million to expand broadband, at least $60 million in downtown revitalization and affordable housing, at least $40 million in state sales tax relief for restaurants and bars and at least $10 million in small business grants, The Colorado Sun reported.