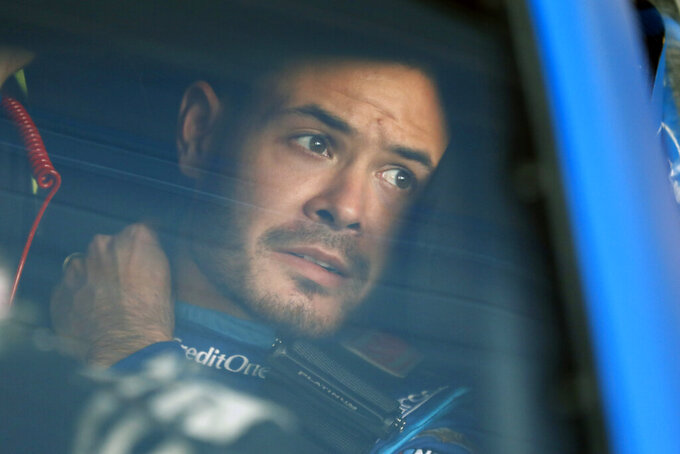 FILE - In this Oct. 18, 2019, file photo, Kyle Larson sits in his car before the final practice for a NASCAR Cup Series auto race at Kansas Speedway in Kansas City, Kan. Kyle Larson was fired by Chip Ganassi Racing, a day after nearly every one of his sponsors dropped the star driver for using a racial slur during a live stream of a virtual race. Of course, in a sport with an extremely checkered racial history, he's already lined up a new gig for 2021 at Hendrick Motorsports. (AP Photo/Colin E. Braley, File)

In these scary times, it's hard to pull off an awards show.

Thankfully, the Newbys have always been a state of mind, so it shouldn't be a problem to carry on safely in the midst of a pandemic.

We never got around to ordering trophies, or reserving a space, or rolling out an actual red carpet. It's always been perfectly acceptable to just remain in your pajamas, camped out in front of a computer screen as the winners were announced.

It works out to be the perfect format for 2020.

So we now present our eighth annual Newby Awards — a look at the best, worst and mostly just bizarre of a masked-up, socially distanced, Zoom-dominated year in sports that seemed more like a decade:

FAN OF THE YEAR

We had to get creative with this one since very few actual fans were allowed through the gates this year.

The Philadelphia Phillies did their best to compensate for the cold, sterile atmosphere by putting out an array of cardboard cutouts — an eclectic mix that included Ben Franklin, Walt Whitman, the 1980 World Series championship team, Chewbacca and Bob Uecker (occupying a seat on the last row, of course).

But the award goes to a brave stuffed bear in Oakland, who was drilled in the noggin with a liner off the bat of Arizona's Ketel Marte but bounced right back up with a smile on its face.

The bear returned to its seat the next night sporting a bandage, but not to worry: The A's reported that it passed the concussion protocol.

Kyle Larson managed to lose his job as a NASCAR driver while the series wasn't even racing, at least not in real cars.

In the midst of playing a live-streamed virtual race, Larson blurted out a racial slur for everyone to hear.

Larson was quickly dumped by Chip Ganassi Racing (though he's already lined up a new gig for 2021 at Hendrick Motorsports).

“I didn’t understand the negativity and hurt that comes with that word," said Larson, sounding like someone who has spent all of his 28 years playing video games in his parents' basement, oblivious to the outside world.

Dishonorable mention: Cincinnati Reds announcer Thom Brennaman, who used a homophobic slur while broadcasting the first game of a doubleheader, apparently not realizing he was on the air.

Right in the middle of calling the second game, he apologized for his hateful language and was removed from the telecast.

WHERE WERE WE AWARD

The good folks at CONCACAF were determined to finish their continental club championship despite the pandemic.

Nine months after North and Central America's Champions League was halted because of the pandemic, the competition resumed at an empty stadium in Orlando, Florida.

Which set up ludicrous scenarios such as Atlanta United, which had wrapped up a dismal 2020 MLS season on Nov. 8, returning to the pitch 5 1/2 weeks later to play one more game: the second leg of a quarterfinal series against Mexico's Club América.

And when was the first leg played? Way back on March 11, just as the coronavirus was bringing everything to a screeching halt.

For the record, América won the nine-months-long series 3-1 on aggregate.

DISCO MANAGER OF THE YEAR

It was quite a 2020 for A.J. Hinch and Alex Cora. Fired for a sign-stealing scheme. Suspended for one season by Major League Baseball. Already back on the job after serving their time.

But as impressive as those credentials may seem, the award goes to Tony La Russa. At age 76, the Hall of Famer signed on with the Chicago White Sox nine years after supposedly retiring as a manager.

Blessed with one of the best young teams in all of baseball — not to mention one of the brashest and most socially conscious — the White Sox inexplicably went with an old-school relic who began his managing career the same year as Disco Demolition Night.

Let's not forget La Russa was facing his second DUI charge at the time of his hiring (which was resolved this week when he pleaded guilty to a misdemeanor reckless driving charge).

WE PAUSE FOR THIS MESSAGE

This is your annual reminder that Colin Kaepernick still doesn't have a job in the NFL four years after protesting racial injustice.

In the ultimate hypocrisy, the league has taken up the cause that he championed but clearly has no intention of taking Kaepernick back.

We also pay tribute to others who took action, from Georgia Tech assistant basketball coach Eric Reveno (who sparked the movement to take a day off from college athletics on Election Day) to LeBron James (whose latest NBA title was a mere exclamation point on his outspoken efforts to address social inequality).

WHAT'S IN A NAME

Washington's NFL team finally joined the 21st century by dumping its offensive name, though it took the greatest national awakening since the 1960s to finally draw out some semblance of shame from owner Dan Snyder.

Before the year was done, the Cleveland Indians said they would follow suit, though not until after the 2021 season.

Washington still hasn't settled on a replacement name, but we'd like to suggest the Red Tails in honor of the Tuskegee Airmen.

As for the others, how about the Cleveland Spiders, Atlanta Bees, Kansas City Mahomes, Chicago Goshawks and Golden State Dubs?

When the NBA announced the night of March 11 that it would be halting play because of the pandemic, the Atlanta Hawks were playing the New York Knicks in a mostly forgettable late-season game between losing teams.

As word filtered through the arena and all the way down to the bench of the shocking developments, the fans began chanting for Vince Carter to enter a game for the Hawks in the closing seconds.

Carter had already announced it would be the final season of his 23-year career, longer than anyone else has played in the NBA.

The fans sensed that the season might be over. The Hawks sent him back to the court. The Knicks respectfully backed away and he knocked down an open 3-pointer.

“If it ended today, at least I scored my last basket," Carter said. "It will be a weird but cool memory.”

Vinsanity headed into retirement with the strangest of finales.

Los Angeles Clippers guard Lou Williams finds the chicken wings at Magic City so delectable that he violated the NBA's virus protocol rules to place an order, causing him to miss the first two games of the league's restart while in quarantine.

At least that was the story Williams pitched. Others thought he might have gone there because Magic City is a well-known strip club near downtown Atlanta.

FEMALE ATHLETE OF THE YEAR

After leading Vanderbilt to the Southeastern Conference women's soccer championship, she suited up for the Commodores' undermanned football team, becoming t he first female to play in a Power Five game and tacking on another historic first when she scored in her next game by kicking a pair of extra points.

“This whole time has been if I can do it, if I’m good enough to do it. It wasn’t if I was a girl or not,” Fuller said. "At the end of the day, they treated me like an athlete and that’s the best I could ask for.”

We'd like to wrap up the show with a hearty good riddance to 2020.

Sorry, no award for you.

Paul Newberry is a sports columnist for The Associated Press. Write to him at pnewberry(at)ap.org or at www.twitter.com/pnewberry1963 His work can be found at https://apnews.com