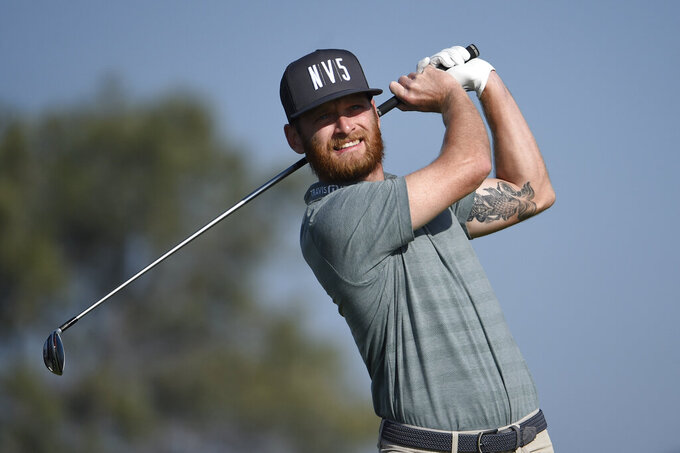 FILE - In this Saturday Jan. 25, 2020, file photo, Tyler McCumber hits his tee shot on the second hole of the South Course at Torrey Pines Golf Course during the third round of the Farmers Insurance golf tournament, in San Diego. McCumber is making the most of what amounts to a second chance on the PGA Tour. (AP Photo/Denis Poroy, File)

Three weeks into the new PGA Tour season, Tyler McCumber might be the first example of how the COVID-19 pandemic that shut down golf for three months can provide second chances.

McCumber had the best Sunday of his young PGA Tour career at Punta Cana in the Dominican Republic. He was bogey-free in the final round with a few superb par saves and a 25-foot birdie putt he rammed into the cup on the last hole for a 66. It looked as though it might get him into a playoff.

But then Hudson Swafford hit 6-iron to 10 feet for birdie on the 17th and won with an 8-foot par putt on the 18th.

And without the pandemic closing shop from March to June, there's a chance McCumber might not even have a tour card.

“In a roundabout way, it feels like I got a good break how it panned out,” McCumber said Monday night.

The son of 10-time PGA Tour winner Mark McCumber traveled far and worked hard to get to this point. He won three times on the PGA Tour Latinoamerica (Ecuador, Mexico and Peru) and three times in a four-tournament stretch in 2018 on the Mackenzie Tour in Canada. He finished among the top 25 on the Korn Ferry Tour the following year to reach the PGA Tour.

His rookie season was going decently enough. McCumber made nine out of 13 cuts. The highlight was Saturday at Torrey Pines playing in front of the largest gallery he had ever seen (Tiger Woods was in his group that day) and shooting 68.

But he wasn't eligible for The Players Championship, so he headed down to Costa Rica to see a friend at TurfSafari for a lot of surfing and a little golf. That's where he was when the pandemic shut down golf, and that's where he stayed for the next month until he could get a flight home and get an idea when — if — golf was going to resume.

These were uncertain times, especially for a PGA Tour rookie.

And then on April 30, when the tour set a target of resuming in June, it figured the only fair way to proceed was a plan in which no one lost a card. Whatever status a player had at the start of the season would apply for the next one, unless players improved their standing.

Three months out of competition didn't help McCumber. He played six of the eight tournaments for which he was eligible, made only one cut and finished 161st in the FedEx Cup.

“I didn't quite get the momentum I was hoping for right off the bat,” he said. “I got a little behind the eight ball, and I was pressing a bit. It was a unique situation, something no one had dealt with before. It made me more mature in how to handle one more curveball.”

Without the shutdown that led to eight tournaments being wiped off the schedule, McCumber probably would have played six more times. Whether that would have allowed him to finish in the top 125 and keep his card is unknown.

And now it's irrelevant.

Because instead of going to the three-tournament series to try to regain his card — and facing a return to the Korn Ferry Tour if he didn't make it — McCumber was allowed to effectively start over. More than a dozen others from the Korn Ferry Tour are in the same situation. They get an extra year, with hopes that it's a full year and there are no setbacks.

McCumber, who showed great poise on Sunday, made the most of it with his runner-up finish in Punta Cana.

There are other examples.

Ted Potter Jr., Aaron Wise and Michael Kim all won on the PGA Tour in 2018 and earned two-year exemptions that would have expired this year. All finished out of the top 125 and would have lost their status. Now they get another year in the “tournament winners” category, the highest priority for getting into events.

The last six months can feel like six years, though McCumber has vivid memories of being in Costa Rica with so much unknown about the pandemic and his own job.

“I think it was the uncertainty of when is the health of humanity going to get better, and then selfishly, when will I get to work. Am I going to get to work?” he said. “And then the way it unfolded, no one would have predicted that.”