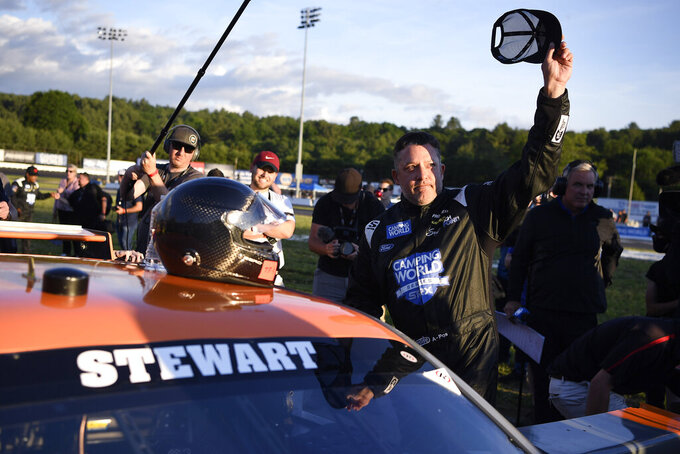 LEBANON, Tenn. (AP) — Tony Stewart tried to do a grid walk at his first Cup Series race since the start of the pandemic. But he's Tony Stewart and he hasn't been at the track in almost 16 months. Everybody wants to chat.

A long conversation with driver Cole Custer and the global head of Ford Performance Motorsports, a valued partner, cost him valuable minutes before the first Cup race at Nashville Superspeedway. By the time Stewart made it to the front of the grid to greet pole-sitter Aric Almirola and doubled back to say hello to Kevin Harvick, well, Harvick's window net was already being latched.

The boss leaned toward his star driver, but the interaction was so brief it's not clear Harvick even knew who it was.

“Was he here?” Harvick asked after Sunday's race. When told Stewart was indeed at the track, the winner of nine races last year said only: “Oh, good.”

It is possible Harvick really didn't see the co-owner of Stewart-Haas Racing but it is also possible his response was his way of sending a message: Stewart has been everywhere but with his NASCAR team and everybody is talking about his absence.

SHR is having a terrible year with all four Cup drivers winless through 17 races. Harvick had four wins at this point last season but he's led only 39 laps this year. SHR doesn't have the speed to challenge Kyle Larson or Hendrick Motorsports.

Chase Briscoe is 26th in the standings, Custer is 27th and Almirola is 28th. The four SHR cars combined have just six top-five finishes and 63 laps led.

Is the underperformance Stewart's fault?

Fans seem to think so and a meme circulates after every SHR poor race of a mother paying attention to only one child in the pool as the other struggles to stay afloat. It's meant to suggest that Stewart is so wrapped up in fiancée Leah Pruett and her drag racing career, his own racing schedule and now the launch of the six-race Superstar Racing Experience that he's ignoring SHR and its struggles.

Stewart, who won SRX's second race on Saturday night at Knoxville Raceway in Iowa before traveling to Nashville with Pruett by his side, finds the very notion flattering.

“It's funny and a huge compliment that all these people think that because I'm not at the shop all the time, that I'm the one making the calls and operating all this singlehandedly and I'm the single reason why it's not working," the three-time NASCAR champion told The Associated Press.

When Stewart in early May accepted an invitation to attend the Indianapolis 500 later as a guest of A.J. Foyt to celebrate the 60th anniversary of his hero's first Indy victory, social media critics argued Stewart belonged in North Carolina at the Coca-Cola 600 with his own team. But Stewart doesn't make in-race strategy calls, doesn't go over the wall during pit stops and he doesn't work on the cars.

He really just sits and watches the race (at Nashville it was from inside an air-conditioned team hauler with Pruett) and his primary at-the-track responsibility is to be the Hall of Famer mingling with guests and sponsors. NASCAR only re-opened garages seven weeks ago.

Gene Haas, the other owner with his name on the building, hasn't been around, either. Your best chance to see Haas of late is on television at a Formula One race, where the two Haas cars are among the worst in the field this season.

Yet it's Smoke who is somehow supposed to fix SHR's problems. At Nashville, he saw Almirola and Harvick finish fourth and fifth — the first time in 2021 two SHR drivers finished inside the top five.

Stewart acknowledges issues within SHR. The team recenly had a meeting that stretched more than two hours that Briscoe called the longest he's ever been part of and that Stewart joined remotely.

“He was sitting there the whole two hours I was there," Briscoe said. "Probably around an hour and 45 minutes in he hadn’t said anything and they were like, ‘Smoke, you still there?’ And he chimed in right away, so he’s involved as well trying to figure it out.”

Stewart told AP any advantages SHR had found last season “got taken away on the NASCAR side from us last year that we haven't been able to find a remedy for.” He noted there have not been any personnel changes and the effort from the team remains the same.

“It's called motorsports. You look at every manufacturer in Formula One and IndyCar, every team, they've all had their moments where something has changed and they've got to play catch-up,” Stewart said. “That's the mode we're in.”

Stewart retired from NASCAR competition in 2016 and turned 50 last month. He's been out of a Cup car long enough that he lacks the familiarity required to offer meaningful feedback on setups or shocks or springs. He can't fix the cars — and neither can Haas, who recruited Stewart to drive for his winless backmarker team with the ownership piece. He has enjoyed 65 victories and two Cup championships since the team became Stewart-Haas in 2009.

Now that NASCAR has opened back up, maybe Stewart will be at track more often. But if he chooses to spend his time with his fiancée or his numerous other racing ventures then that's his right. Smoke sitting on the pit box every week is never going to be the answer that makes SHR's cars any faster.