Comfort over style for coaches is college basketball trend 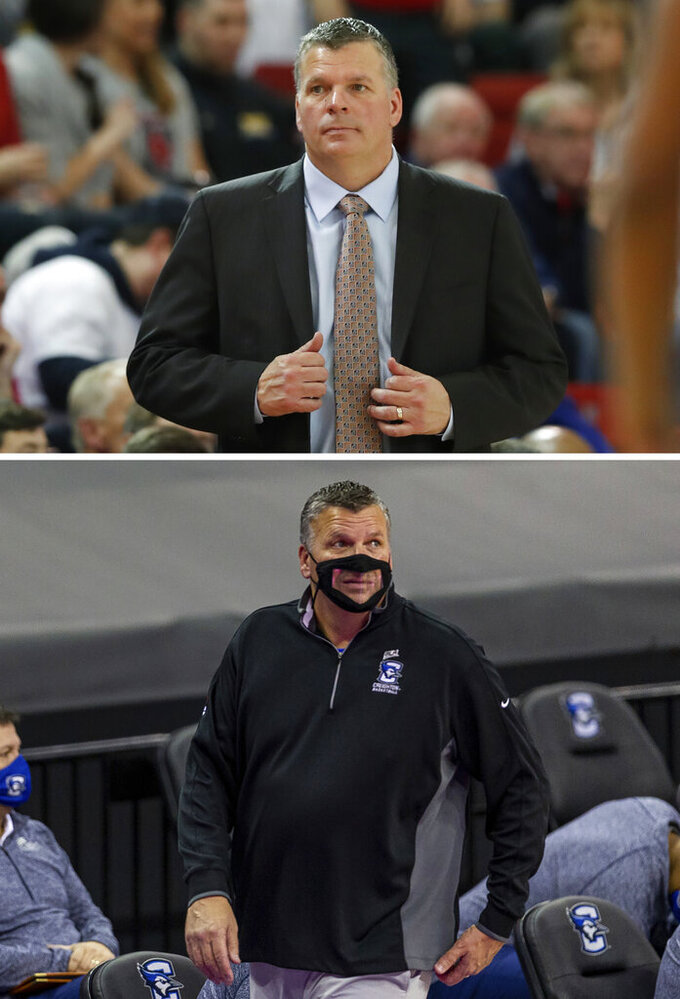 FILE - At top, Creighton head coach Greg McDermott appears resigned during the second half of an NCAA college basketball game against St. John's in New York, in a March 1, 2020, file photo. At bottom, Creighton coach McDermott watches the game action against Xavier during an NCAA college basketball game in Omaha, Neb., in a Dec. 23, 2020, file photo. College basketball coaches have eschewed the traditional game day attire of coats, ties and dress slacks in favor of polos, quarter-zips and warmup pants. The trend started over the summer with NBA coaches who went casual when the league re-started its season at Walt Disney World resort near Orlando. McDermott said he doesn't plan to dress up for games again. (AP Photo/File) 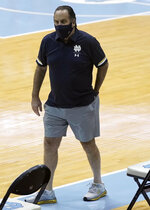 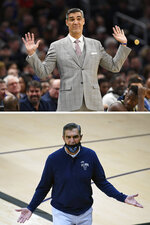 Coaches across the country have eschewed the traditional game day attire of coats, ties and dress slacks in favor of polos, quarter-zips and warmup pants. Notre Dame's Mike Brey went so far as to coach a game in shorts.

The 76-year-old D’Annunzio is the personal tailor for the best dressed man in the game, Villanova's Jay Wright. It nearly broke D’Annunzio's heart when Wright told him about the vote by Big East coaches to go casual this season.

“The coaches shouldn't look exactly the same as the players and everyone that’s affiliated with basketball — a pair of warmup pants and all that,” D’Annunzio said. “For a game, you need to look the part and be respectful for the position. It’s a little disappointing but I understand. This is just a difficult time.”

NBA coaches went casual when the league re-started its season over the summer at Walt Disney World in Florida and college coaches have followed their lead. The idea picked up serious momentum for the general public during pandemic lockdowns, too.

Dressing down isn't a new concept in college athletics. Bob Knight and his red sweater were inseparable. George Raveling was wearing a tracksuit on game days at Iowa in the 1980s, well before Bob Huggins made the look cool.

“Bob Huggins is light years ahead of all of us," Brey said. "Maybe we should all stay in the Huggins look.”

Creighton's Greg McDermott said he doesn't plan to dress up for games again.

“I think it makes way more sense,” he said. “We’re moving a lot, we’re bending down when we’re in the huddle. Bankers don’t wear suits anymore. Everything has changed. I think it’s the way it should be anyway.”

On the women's side, Stanford's Tara VanDerveer and UConn's Geno Auriemma traded in their blazers for quarter-zips while Arizona's Adia Barnes, known for her trendy wardrobe and Gucci shoes, coached a game in a long-sleeved T-shirt.

Tennessee's Rick Barnes said he came up in an era when a coach was considered disrespectful to the game if he didn’t do what his predecessors had done, and that included the way he dressed. That's no longer the case.

“The way we are now is basically the way we are in practice every day,” Barnes said, "so I like it. I really do.”

So does Wisconsin's Greg Gard, who said Raveling had the right idea with those tracksuits.

“I’m not going to go as far as Mike Brey has at Notre Dame and start wearing shorts on the sideline,” Gard said, “but I do love the casual.”

Brey said he took the notion of acceptable coaching attire to a "ridiculously new level" last Saturday. He sensed his team was tight going into a game at North Carolina on Jan. 2, and he wanted to loosen them up, so he put on gray shorts along with a blue polo.

“I get it. Hey, the suit look is classy,” Brey said. “I’m a physical education major. I like dressing like a PE major for game day. I do for practice every day.”

Brey is like a lot of coaches, D’Annunzio said.

“Look, most of those coaches have no style sense,” he said. "For them, they were jocks, and they’re really not into wearing suits because they don’t have that sense of style like Jay. .... I can appreciate that they want to not wear suits because they’re not comfortable with it.”

D’Annunzio, who has owned D&B Tailors in suburban Philadelphia since 1966, has made tuxedos for Frank Sinatra and suits for the late comedian George Burns and also has had Phillies great Mike Schmidt and other pro athletes as clients.

D’Annunzio estimated he’s made 40-50 suits for Wright, whose nickname is “GQ Jay.” That works out to between three and five suits a year, and the tailor acknowledged the coaches' agreement to dress casual is taking money out of his pocket.

D’Annunzio said Wright told him he would wear suits again next season, which conflicts with Wright's remarks in a Zoom news conference last month.

“Yeah, I hope this goes into the future,” he told reporters. “I've long contended this is how we should dress for games.”

All is not lost for D’Annunzio. Wright had him make some changes to the polyester-blend warmup pants he wears for games.

“We made side slits and I made a couple where the slits were curved, which is really difficult,” D’Annunzio said. “It takes a lot of time to do that. He wanted to have a little style to it, and that’s the only way we could make something a little different for him, so he doesn’t look like everybody else."