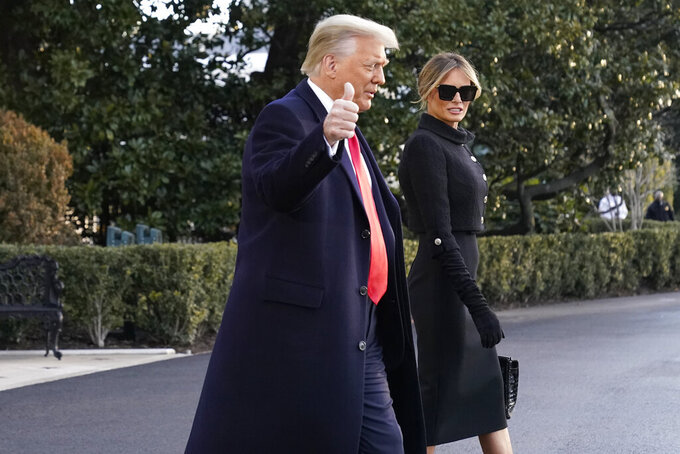 President Donald Trump and first lady Melania Trump walk to board Marine One on the South Lawn of the White House, Wednesday, Jan. 20, 2021, in Washington. Trump is en route to his Mar-a-Lago Florida Resort. (AP Photo/Alex Brandon)

Sure, security ringed the Capitol and the audience was largely empty of average Americans. Virtually everyone wore masks because of the pandemic and elbow bumps outnumbered hugs among dignitaries there to see President Joe Biden take over.

There was no violence, however. No security breaches. After two harrowing Wednesdays, with a riot at the Capitol and an impeachment vote, viewers this time saw familiar rituals of comity and the nation's leaders appeal to democracy's ideals.

“I'll be honest, this has been an elixir of sorts, just to see the normalcy," said NBC's Chuck Todd.

“This is an exorcism of the 6th of January,” said CBS' John Dickerson. "What we're seeing today is an ejection of insurrection.”

Trump skipped the inauguration of his successor, the first president to break that tradition since 1869. His vice president, Mike Pence, was there and he and his wife were later escorted to their car by successor Kamala Harris and her husband, a powerful symbol of the transfer of power.

Although Pence looked mostly stoic and lonely on the podium, “in the end, he decided to do the right thing,” CNN's John King said.

Biden's inaugural address spoke of the need for national unity. But there were signs of the challenges that await him.

The conservative One America News Network skipped Biden's swearing in and inaugural address. Instead, it aired “Trump: Legacy of a Patriot,” which reviewed his accomplishments.

“If Democrats need thousands of troops to occupy the Capitol on Inauguration Day, then it seems possible that their candidate wasn't actually elected by the people,” Sharp said.

On MSNBC, when the camera showed House Minority Leader Kevin McCarthy, anchor Brian Williams reminded viewers that McCarthy and many other Republicans voted against certifying Biden's victory after the Capitol riot.

“This may stay with us for awhile,” he said.

Fox News Channel's Chris Wallace, in what seemed like a pointed reference to some of his colleagues who supported Trump's baseless voter fraud claims, made note of Biden's denunciation of misinformation.

Earlier on Wednesday, networks left the mute button unused while covering Trump's final address as president at Joint Base Andrews.

“We’re going to dip into this for as long as the president manages to tell the truth,” MSNBC's Joe Scarborough said.

His network, along with ABC, CBS, CNN, Fox News and NBC, did not pull away. Trump bragged about his election vote totals but dropped the persistent claim that he had really won. He wished the new administration well but did not mention Biden by name.

In a jarring juxtaposition of images, cameras showed Air Force One, carrying Trump to Florida, taxi on the runway as the loudspeaker played “My Way.” Television cameras then switched to Biden and his family at church.

Setting up the day, Americans with different points of view had clear choices of media outlets that would reflect how they felt.

“There are so many people who voted for Trump that have a hole in their heart this morning,” said “Fox & Friends” host Ainsley Earhardt.

The New York Times marked Trump's exit with an exhaustive project documenting every person or entity he had insulted on Twitter before his account's suspension on Jan. 8. The Washington Post updated its count of lies and misstatements by Trump: 30,534 heading into his last day as president.

Over on CNN, Dana Bash watched Trump leave the White House for the final time as president and walk to the Marine One helicopter.

“He looks small,” she said. “He just looks like a small man.”