Company earnings tell the story of the pandemic's early days 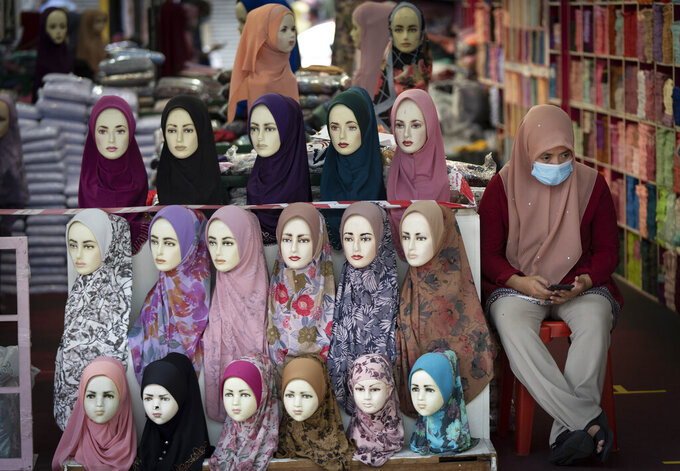 A shop vendor wearing a face mask to help curb the spread of the coronavirus waits for customer outside headscarves shop in Kuala Lumpur, Malaysia, on Monday, May 11, 2020. Despite a sharp drop in infections, Malaysia's leader said restrictions to fight the coronavirus will be extended by four more weeks until June 9. The government has already let most businesses reopen with strict conditions to help revive a hard-hit economy. But mass gatherings are still barred, with schools, cinemas and houses of worship staying shut, group sports prohibited and interstate travel banned. (AP Photo/Vincent Thian)

The outbreak of the coronavirus has dealt a shock to the global economy with unprecedented speed. Following are developments Monday related to national and global response, the work place and the spread of the virus.

EARNINGS SEASON: The damage from the pandemic is playing out in quarterly earnings reports, which have begun to capture the earliest days of the outbreak. Quarterly growth has plunged 13% for S&P 500 companies that have reported, according to S&P Global. Most companies have withdrawn all financial guidance for the year given the unprecedented disruption to the economy.

— Under Armour's sales fell 23% in the first quarter, with 15% of that decline related to the impact of the virus outbreak. The report Monday dragged down a bunch of other clothing makers including Hanesbrands, PVH, Tapestry and Capri.

— If there is any potentially good news for the crippled hotel industry, it can be found in China. Marriott, like other lodging companies with operations in China, said Monday that business there is starting to come back. Still, Marriott's revenue per available room dropped 22.5% and it slashed its expectations for this quarter.

UNCERTAIN FUTURE: Companies from all sectors are trying to find a path out of the pandemic, and it's faltering. Neiman Marcus and J.Crew have already filed for bankruptcy protection, along with a smattering of energy companies. Hundreds more are expected.

— Stage Stores filed for Chapter 11 bankruptcy protection Monday. The company said it will simultaneously solicit bids from those seeking to keep operations going, and from those that want to buy its assets. The chain will reopen some stores in the coming weeks to liquidate its inventory.

— Shares of Chesapeake Energy slumped in Monday trading after the company said in a regulatory filing that “management has concluded that there is substantial doubt about the company’s ability to continue as a going concern.” Demand for energy has plummeted during the outbreak, driving prices for crude and natural gas sharply lower.

— Hertz reported a $356 million first-quarter loss, saying “coronavirus created a major business disruption.” The company noted its lenders agreed to cut it some slack until May 22 but warned that if business doesn't rebound and it can't find additional financing sources, it won't be able to fund its operations over the next 12 months.

HOUSE FIRE: The sale of a house requires a lot of face-to-face contact, from property showings to contract signings. The inability to continue business has usual has quashed real estate sales.

— PulteGroup's net new orders plunged 50% in April compared with last year. The company is cutting about $100 million in costs on an annualized basis through furloughs and other initiatives. A portion of compensation for senior executives and board members is being redirected to an employee assistance fund.

— When the U.S. reports the number of new home construction projects underway next week, economists expect a 22.3% tumble.

GOVERNMENTS & CENTRAL BANKS: Countries are trying to re-open their economies and limit economic damage. The results have been mixed.

— The French began leaving their homes and apartments for the first time in two months without permission slips. Clothing stores, salons and other businesses reopened.

SNACKS & PANDEMICS: Self isolation has changed what and where people eat and drink. Companies that had struggled because of changing tastes are back in favor with people seeking comfort foods.

— General Mills is raising its full-year sales forecast after seeing unprecedented demand as millions stocked pantries ahead of and during lockdown. U.S. retail sales for the maker of Cheerios, Haagen Daz and Gold Medal flour, jumped 45% in March and 32% in April. The company says it will exceed its sales and profit forecasts this year.

— PepsiCo launched two web sites to sell snacks and drinks directly to consumers. PantryShop.com offers curated kits for $29.95 or $49.95; a workout kit contains Gatorade protein bars, Muscle Milk protein shakes and Propel water with electrolytes, for example. At Snacks.com, you can get Frito-Lay snacks. Most orders are arrive in two days.

Sales of soft drink syrups, a major business, has been cut off with restaurants and sporting and music venues closed.

MARKETS: Stocks ended mixed on Wall Street Monday, with stocks clawing back most of their early losses.

TROUBLE IN THE AIR: Richard Branson’s Virgin Group plans to sell about $500 million worth of shares in its Virgin Galactic space business to raise cash for its travel companies, which have been hit hard by the coronavirus pandemic. The holding company disclosed its plans Monday in a filing with the U.S. Securities and Exchange Commission.

Branson warned last month that his Virgin Atlantic airline would fail without financial help from the U.K. government, and Virgin Australia filed for bankruptcy protection after failing to get help from the government there.

Miami Air, a charter airline that carried pro sports teams and other customers, appears to have flown its last flight. In a filing Monday, the airline asked to change its bankruptcy case from reorganization to liquidation. It said its financial troubles are a direct result of the coronavirus pandemic that has devastated air travel.