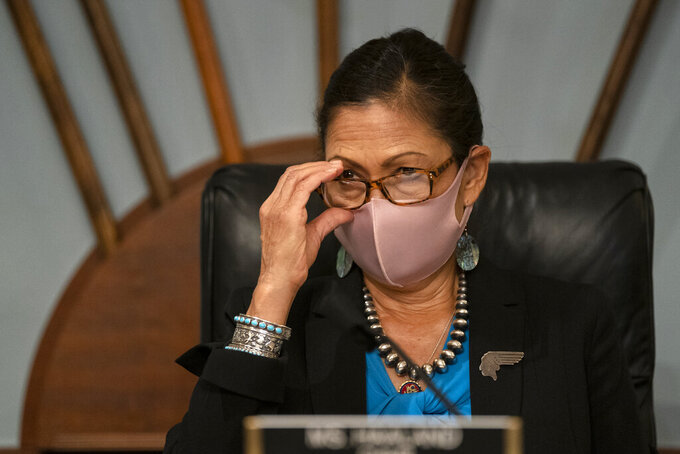 Rep. Debra Haaland, D-N.M., chair of the House Committee on Natural Resources, Subcommittee on National Parks, Forests, and Public Lands adjusts her glasses as she wears a face mask during a hearing on Capitol Hill in Washington, Tuesday, July 21, 2020, to consider bills to remove Confederate statues. (AP Photo/Carolyn Kaster)

During five minutes of free broadcast time, Garcia Holmes said she believes negotiations on a new federal recovery package should continue in order to help a state with surging unemployment, homelessness and other hardships related to COVID-19. President Donald Trump on Tuesday declared there would be no action before the election on economic-stimulus legislation.

Garcia Holmes, a former police detective and administrator for the state attorney general's office, applauded the Trump administration's recent decision to send federal agents to Albuquerque to help with traditional law enforcement efforts, and she characterized her opponent's approach to crime legislation as “dangerous and radical.”

Haaland spokesman Scott Forrester says the congresswoman still plans to participate this week in candidate interviews on New Mexico PBS and a pre-recorded debate on KOAT.

Haaland’s campaign was dissatisfied with terms of the debate proposed by KOB for Tuesday. She planned instead to join an online campaign event for state House Rep. Melanie Stansbury.

Haaland is a Laguna Pueblo tribal member who became one of the first Native American women elected to Congress with her victory in the 2018 election in the 1st Congressional District that encompasses Albuquerque.