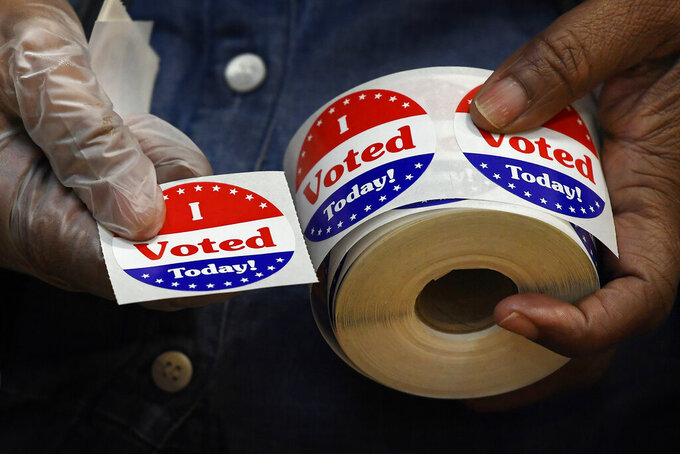 A volunteer holds a sticker to give to a voter at Domus Kids, Inc. polling place on Election Day, Tuesday, Nov. 3, 2020, in Stamford, Conn. (AP Photo/Jessica Hill)

HARTFORD, Conn. (AP) — All five incumbent U.S. representatives won reelection in Connecticut, completing a sweep for Democrats in a state that has not sent a Republican to Congress in over a decade.

U.S. Rep. Rosa Delauro, the longest-serving member of Connecticut's delegation to Washington, fended off an aggressive challenge by political newcomer Margaret Streicker, a Republican real estate executive from Milford. DeLauro, who has represented the district in south-central Connecticut since 1991, has been critical of the Trump administration’s efforts to address COVID-19, accusing the president of lying to Americans about the seriousness of the virus.

Former Vice President Joe Biden defeated President Donald Trump in the state, and Democrats were confident they had significantly expanded the number of seats they hold in the General Assembly.

“Republicans in Connecticut faced enormous hurdles this year in such a blue state. We held on in many races when all the odds were stacked against us, it’s a testament to how hard all our candidates worked,” Fasano said.

Connecticut’s congressional delegation has been all Democratic since former Republican U.S. Rep. Chris Shays lost a reelection bid in 2008.

Hayes, a former national Teacher of the Year, won a second term by defeating Republican David X. Sullivan, a former federal prosecutor in the northwestern Connecticut district. She contracted COVID-19 in September and said her family’s experience with the virus helped her see firsthand the shortcomings of the national response, including a lack of available testing.

Sullivan pitched himself as a law-and-order candidate and portrayed Hayes as being out-of-touch politically with the district in northwest Connecticut. He posted a statement offering his congratulations to Hayes and urging people to “work together” as the state and nation face many challenges.

Courtney defeated Republican Justin Anderson to win an eighth term in Congress. In an eastern Connecticut district that has become more politically conservative in recent years, Courtney has focused on less partisan issues such as support for the Electric Boat shipyard in Groton and help for homeowners with crumbling concrete foundations.

In the effort to oust DeLauro, Streicker raised nearly $1.4 million as of Oct. 14, $1 million of it of her own. She spent hundreds of thousands of dollars of that money on TV ads, many sharply critical of DeLauro, who raised nearly $1.7 million and ran TV ads for the first time in about two decades.

Himes declared victory about 45 minutes after the polls closed Tuesday, thanking supporters at a post-election event and pledging to help “restitch our civic life,” referring to the acrimony in American politics. Himes faced a challenge from Republican Jonathan Riddle.