Consumer confidence ticks down in May, but remains strong 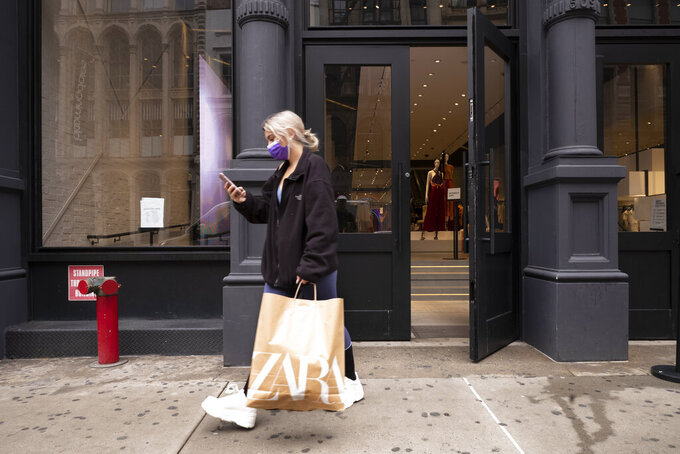 A customer walks out of a Zara store, Thursday, March 25, 2021, in New York. U.S. consumer confidence rose sharply for a second straight month in April, hitting the highest level in more than a year as consumer sentiment was boosted by a more rapid rollout of the vaccines and another round of support payments. (AP Photo/Mark Lennihan)

SILVER SPRING, Md. (AP) — Consumer confidence ticked down slightly in May but remains nearly as high as its been since the pandemic began.

The Conference Board reported Tuesday that its consumer confidence index fell to 117.2 from April's 117.5 reading, the highest level since February of 2020, just before the pandemic began.

The present situation index, based on consumers assessment of current business and labor market conditions, rose to 144.3 from 131.9. Although the percentage of consumers surveyed claiming that business conditions are “good” fell slightly from 19.4% to 18.7%, those claiming conditions are “bad” declined more, from 24.5% in April to 21.8% in May.

Consumers’ assessment of the labor market also improved as the percentage of consumers saying jobs are “plentiful” climbed from 36.3% to 46.8%. Those saying that jobs are hard to get fell to 12.2% from 14.7%. Unemployment claims have fallen to pandemic lows each week for the past the month.

The Conference Board's expectations index, based on consumers' short-term views for income, business and the job market, fell to 99.1 in May, from 107.9 in April.

Consumers' expectations for the future may be less bright because the tailwind from Americans spending their $1,400 stimulus checks could be fading. Earlier this month, the Commerce Department reported that retail sales in the U.S. flattened out in April after soaring in March, when many Americans received those government checks and boosted their spending.

Economists have said that rising confidence should bolster overall economic growth as consumers, who account for 70% of economic activity, spend more as lockdown restrictions are eased or abandoned altogether in many places.

Recent government data shows that the nation’s gross domestic product — its total output of goods and services — is expected to continue to rise. Following a 4.3% gain in the fourth quarter of 2020, the government’s first estimate of the January-March quarter came in at a brisk 6.4% annual rate. Some economists expect even bigger growth in the current April-June quarter — an annual pace of 10% or more — driven by a surge in people traveling, shopping, dining out and resuming their pre-pandemic spending habits.

That optimism is on full display in U.S. markets with five of the six top gainers on the S&P 500 carrying the tickers of airlines or cruise companies.

Shares in United Airlines rose more than 5% Tuesday after the airline said ticketed yields from casual travelers are near prepandemic levels. Shares in Delta Air Lines jumped 2% after the company said bookings have been better than expected.