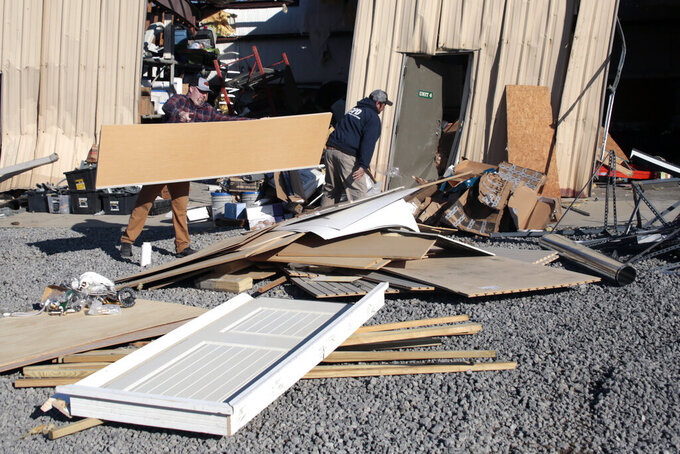 The governor surveyed the brunt of the damage, at Ocean Ridge Plantation, a neighborhood where residents recounted near-death experiences from the powerful EF3 tornado that approached swiftly.

“It developed so fast,” Conrow told the governor. “I mean, it just was really nothing and just exploded. Within four minutes, we had a tornado on the ground, which is scary because everyone’s in bed at nighttime sleeping.”

He told reporters during Cooper's visit: “It was just a freak storm that developed so fast we had no chance to respond.”

Mark Willis, meteorologist in charge for the National Weather Service in Wilmington, told The Associated Press that his team at the federal agency issued a severe thunderstorm warning at 11:33 p.m. Monday, followed by a tornado warning six minutes later.

Several residents described for AP how they scrambled to hide in closets and bathrooms as conditions quickly worsened. Some said they received a warning alert on their phone two minutes after the tornado had already passed.

“The storm developed quickly and our storm survey team is still evaluating the exact details in relation to when and where the tornado ultimately touched down, how strong it was, how far it traveled, and other details,” Willis said in a statement.

He noted that the Storm Prediction Center had forecast a slight risk for severe storms that highlighted the threat of isolated tornadoes and damaging wind gusts. He added that members of his team spoke with some residents who said the initial thunderstorm warning helped them brace for the impact.

On his tour, Cooper described the damage as “devastating." He vowed to direct state resources to help rebuild destroyed homes and businesses and also figure out what could be done differently to give people more warning time the next time a severe storm develops.

“We need to look at what happened here and learn from it and see if systems can be improved," Cooper said.

Speaking to residents in the community — many of whom seldom wear masks despite the coronavirus pandemic — Cooper told two residents, “We'll marshal as many of the state resources as we can get and need to help you. I know it's hard on a lot of families right now, but this community seems to be very close-knit.”

But some people remained frustrated, saying they had no interest in speaking with the governor.

Richard Dobkin, a 58-year-old Sunset Beach resident who owns a restaurant, a storage facility and a few other businesses in the area, said he hasn't slept in two days. He has been working to assess what he believes to be at least $5 million in damage to his businesses.

Before the tornado hit his Ocean Ridge Storage Solutions business about a mile (1.6 kilometers) from the Ocean Ridge Plantation, he said he was already struggling financially from the governor's pandemic-related business restrictions. And because his other businesses were strong, Dobkin said, he couldn’t qualify for a loan through the federal government's Paycheck Protection Program. Now, he said he’s looking at substantial losses after the tornado strike and a long road to recovery.

Two 10,000-square-foot (930 square meter) warehouses storing items for 14 tenants collapsed. Dobkin expressed aggravation, saying no insurance adjuster had showed up. By late Wednesday morning, he was bulldozing the sites that were considered too unsafe to remain in place.

“I don't think it's set in yet for me,” Dobkin said. “I think it's like a dream I'm having. I'm gonna wake up in the morning and everything's going to be OK. I don't even know what to think at this point."

Brunswick County Sheriff John Ingram wants nonresidents to stay away from the damaged area unless they are helping with the recovery. Said Ingram, “The last thing we need is to be inundated with a lot of traffic and onlookers as people are looking to pick up the pieces.”