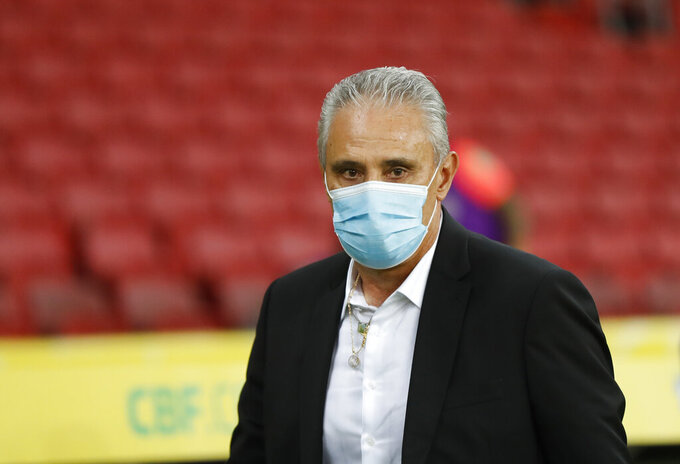 The South American tournament is scheduled to be played June 13-July 10 in Brazil. Copa America was originally set to be co-hosted by Colombia and Argentina. Colombia was forced to withdraw following social unrest and Argentina reportedly declined to host the continental tournament because of a worsening of the pandemic.

It will now be hosted by Brazil, even though more than 470,000 Brazilians have died so far from the coronavirus and analysts expect another wave of the virus to hit Brazil by late June.

On the field, Brazil leads the round-robin tournament with 15 points, four ahead of second-place Argentina. The top four teams automatically secure a spot at the 2022 World Cup in Qatar.

The post-match news conference of Brazil coach Tite in Asuncion is more anticipated than the game itself. After the Seleção's 2-0 home win against Ecuador, Tite said he and his players would make it clear whether they will participate in the next Copa America in a decision that mixes views on pandemic control and internal politics.

“We want to speak after the match against Paraguay because we don’t want to lose our focus,” Brazil captain Casemiro said Friday.

Brazilian media reports say Tite could resign before the tournament begins due to disagreements with the country’s soccer confederation.

The government confirmed Saturday night that Bolsonaro had assured executives of South American soccer body CONMEBOL that Brazil will host the event no matter what.

Brazilian soccer confederation president Rogério Caboclo was suspended on Sunday for 30 days after an accusation of sexual harassment against him emerged. He denies any wrongdoing. The suspension could be further extended as the committee investigates the accusation. Bolsonaro agreed Brazil could host the South American tournament after a request from Caboclo.

Argentina's soccer federation says the team will be present at Copa America as a reflection of "its sporting spirit throughout history,” but did not make clear if the team's top players, including Lionel Messi, will be at the tournament.

“All the staff of the Argentinian national team will work in unity to overcome this adversity that, unfortunately, affects all of us South Americans equally,” the federation said.

It tweeted that it had received authorization to use its base in Buenos Aires for the tournament in Brazil.

“We will follow the mandatory arrival at the Brazilian host city on the day before the (Copa America) match,” it said.

About 5,000 fans are expected to attend Colombia's game at the Metropolitano stadium in Barranquilla despite still alarming coronavirus figures in the Andean nation.