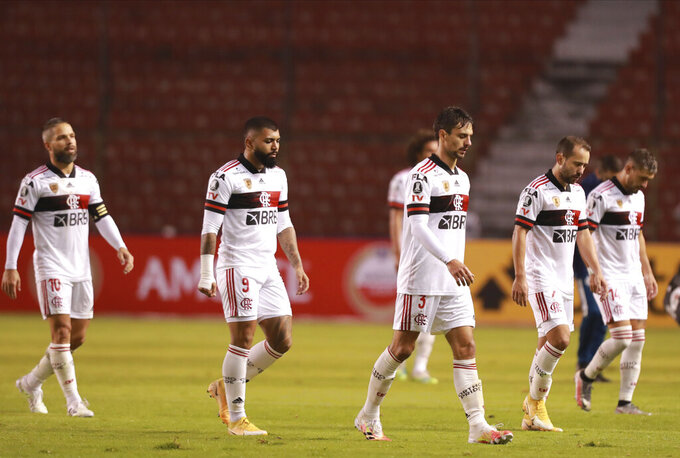 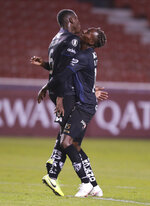 SAO PAULO (AP) — Defending Copa Libertadores champion Flamengo of Brazil was trashed 5-0 at Ecuador's Independiente del Valle on Thursday in their first match in the tournament in six months.

Del Valle, the reigning champion of the Copa Sudamericana, opened the scoring in the 40th minute with Moisés Caicedo. Its four other goals came in the second half with Angelo Preciado (49), Gabriel Torres (59), Jhon Sánchez (81) and Beder Caicedo in the second minute of stoppage time.

Flamengo, which has struggled since the departure of coach Jorge Jesus to Benfica in July, also saw defender Gustavo Henrique be sent off in the dying seconds of the match in Quito.

The South American tournament restarted this week after a halt that began on March 12, at a time when nearly all cases of COVID-19 came from other continents.

Now Brazil, Peru, Colombia and Argentina are among the top 10 countries in the world in terms of confirmed cases of the disease.

Del Valle leads group A after three matches with nine points. Flamengo is second with six.

Catalan coach Domènec Torrent, a former assistant of Pep Guardiola, is already under pressure from fans. Flamengo lost four of his 11 matches in charge.

In less than a year, Jesus took the Rio de Janeiro giant to five titles, including its first South American crown in 38 years. The team also lost four matches under his orders, including the Club World Cup final against Liverpool in December, but won staggering 43 out of 57.

Also on Thursday two Argentinian giants overcame their own expectations after a long period of inactivity.

2019 runner up River Plate drew 2-2 at Sao Paulo, with its players scoring all the goals of the match. Enzo Pérez opened the scoring with an own goal in the 10th minute, but River got level eight minutes later with Rafael Santos Borré from close range.

The Argentinians scored the second with a strike from Julián Álvares in the 80th minute, but Sao Paulo put the final number in the scoreboard with another River own goal by Fabrizio Angileri three minutes later.

While River started training only weeks ago, Sao Paulo has played competitive matches since July. The result at the Morumbi kept the Argentinians and the Brazilians tied after three matches with four points in group D, which is led by Ecuador's Liga de Quito.

Boca beat Paraguay's Libertad 2-0 in Asuncion after a week in which 22 of its players had tested positive for COVID-19. Many were allowed to play anyway because soccer authorities considered they had already recovered.

Eduardo Salvio scored a brace for the Argentinians, with goals in the 6th and in the 84th minute. Boca now leads group H with seven points, one ahead of second place Libertad.