Copa Libertadores to restart in September after 6-month halt 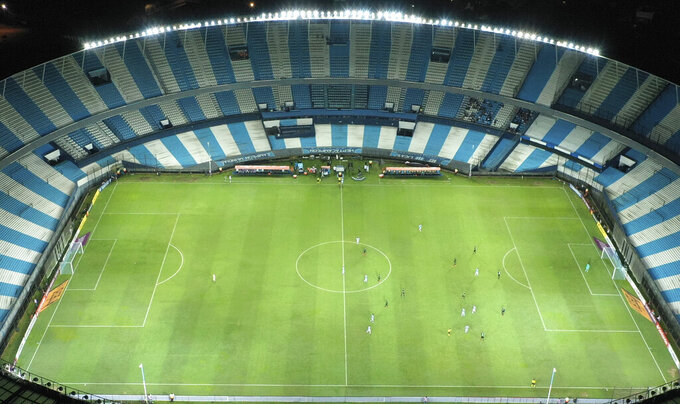 Players of Peru's Alianza Lima and Argentina's Racing Club play a Copa Libertadores soccer match at the Presidente Peron stadium in Buenos Aires, Argentina, Thursday, March 12, 2020. The match was played in an empty, closed door stadium as part of the government's measures to contain transmission of the new coronavirus. For most people the new coronavirus causes only mild or moderate symptoms, such as fever and cough. For some, especially older adults and people with existing health problems, it can cause more severe illness including pneumonia. (AP Photo/Gustavo Garello)

SAO PAULO (AP) — The Copa Libertadores will restart on Sept. 15 after being suspended for almost six months due to the coronavirus pandemic.

CONMEBOL announced on Monday dates for the four remaining rounds of the group stage, which is scheduled to end on Oct. 22.

The 16 group matches of the third round are expected to be played entirely in empty stadia.

Fans will be allowed in stadia only where local health authorities agree.

Dates for the knockout matches are still to be decided.

CONMEBOL halted South American club tournaments in March and initially expected to resume in May. But since then the outbreak in the region has worsened, especially in Brazil, Ecuador and Chile. Others, such as Argentina and Peru, are beginning to surge in cases and deaths.

The first match of the restart will be a Group C clash between Bolivia's Jorge Wilstermann and Brazil's Athlético.