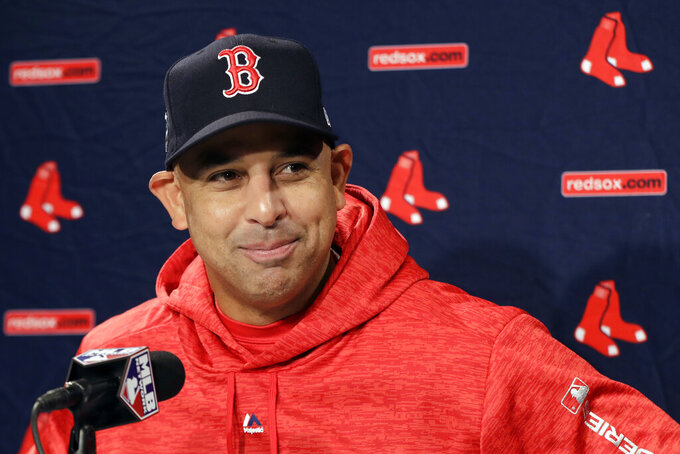 FILE- In this Oct. 21, 2018, file photo, Boston Red Sox manager Alex Cora speaks to media during a baseball work out at Fenway Park in Boston, as they prepare for the World Series against the Los Angeles Dodgers. The Red Sox rehired Cora as manager Friday, Nov. 6, 2020, less than a year after letting him go because of his role in the Houston Astros cheating scandal. (AP Photo/Elise Amendola, FIle)

And the Red Sox manager wouldn't be surprised if Andrew Benintendi and Eduardo Rodríguez bounce back with him.

In a call with reporters on Thursday, Cora predicted better things from some of the Boston players who had an off year during the pandemic-shortened season of 2020, when he was serving his sign-stealing suspension and the ballclub stumbled to last place.

“I’m not a gambling man, but I’ll bet you $1 that J.D. will have a better season,” Cora said. “I’m watching a lot of games and videos, it was a different hitter. ... I know he recognized toward the end of the season what was wrong with him, but he wasn’t able to take it to the batter’s box.”

Martinez finished fourth in AL MVP voting in 2018, when he hit 43 homers and led the league with 130 RBIs while helping the Red Sox win a franchise-record 108 games and the World Series. The team finished third the next year but Martinez was still pretty good, batting .304 with 36 homers and 105 RBIs.

Even accounting for the shortened season this year, Martinez posted the worst numbers of his career: seven homers, 27 RBIs and a .213 average. Benintendi, the AL rookie of the year in 2017, also struggled this year, batting .103 in 14 games before ending the season on Aug. 11 with a rib cage strain.

Cora said he wants to see Benintendi focus less on home run hitting and more on speed and defense.

“I'll take Andrew Benintendi the complete player," Cora said. “The Andrew that we saw in October 2018, that’s the Andrew we want. ... If we get that guy back, we’re in a good position.”

In other topics, Cora said:

— He was encouraged to see the video of Rodríguez pitching off of a mound. The 27-year-old left-hander missed all of last season with coronavirus-related myocarditis.

“It’s not a joking matter,” Cora said. “We know that it’s a very serious situation, and I’m glad that it’s working out.”

— Chris Sale is also making progress in his return from Tommy John surgery. He is expected to miss the start of the season, if it starts on time, but could still be back some time in the first half of the year.

“Our medical staff doesn’t want to put a timetable on it,” Cora said. “But at the same time, we’re very happy that he’s progressing the right way.”

— He has been in touch with Ron Roenicke, his former bench coach who managed the team in 2020 while Cora served the one-year suspension for being a ringleader in the Houston Astros' cheating scheme. Cora wouldn't say if he thought he could have solved the problems that left the Red Sox last in the AL East.

“I think Ron Roenicke, a person that I love and respect, did an outstanding job with the group," Cora said. "Regardless of the results, they did everything possible to win the game as far as effort, but it didn’t happen. I like Ron, we stay in touch, we talked about a few things that happened during the season, and I’ll take that to 2021.”

— If the season started today, Matt Barnes would be the closer. The 30-year-old righty had nine saves in 13 opportunities last year, most of them after Brandon Workman was traded to Philadelphia.

“If the season started tomorrow and we had the lead in the ninth inning and we haven’t used Matt in the seventh or eighth, I’d flip him the ball," Cora said. "Matt Barnes is one of the best relievers the last few years in the big leagues and I have total trust he can do the job.”