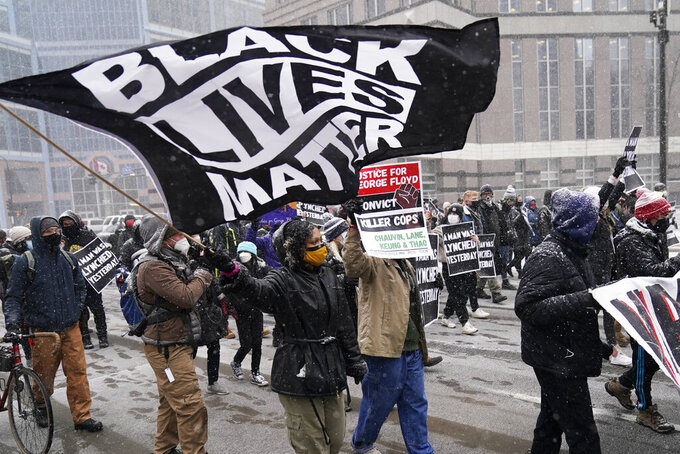 A group of protesters march in the snow around the Hennepin County Government Center, Monday, March 15, 2021, in Minneapolis where the second week of jury selection continues in the trial for former Minneapolis police officer Derek Chauvin. Chauvin is charged with murder in the death of George Floyd during an arrest last may in Minneapolis. (AP Photo/Jim Mone)

In the months since the police killing of George Floyd sparked a racial reckoning in the United States, American corporations have emerged as an unexpected leading source of funding for social justice.

Corporate giving to racial equity causes has far outpaced donations from foundations and individual philanthropists since Floyd’s killing in May, according to the philanthropy research organization Candid.

Companies donated or pledged about $8.2 billion of the $12 billion in total contributions that were earmarked for racial equity — the “first time direct corporate giving to racial equity causes has reached this magnitude” — said Andrew Grabois, Candid’s corporate philanthropy manager.

Sizable commitments have come from corporations ranging from JPMorgan Chase, PayPal and Mastercard to Microsoft, Salesforce and the National Football League. Those pledges don’t even count other minority-focused investments, like a JPMorgan initiative to lend to minority home buyers and small businesses, that could eventually benefit the corporations themselves.

The trend signals a shift for large corporations, fueled by the evolving expectations of younger employees and consumers about corporate responsibilities to social causes. Advocates say the corporate money won’t be enough to soon achieve the racial equity in hiring, housing and policing or the investment in Black communities and institutions that they've sought. But it marks a start.

“The world is changing, and the expectations of how companies engage are changing,” said Brandee McHale, Citi’s head of community investing and development.

The catalyst, of course, was the graphic and widely viewed killing of Floyd last May at the hands of the Minneapolis police, with video footage showing the former officer Derek Chauvin pressing his knee against Floyd’s neck for about nine minutes. This month, jury selection has been proceeding in Chauvin’s murder trial.

“When George Floyd was killed, consumers and stakeholders called on companies to invest in issues related to racial equity, and many responded,” Grabois said. “Direct corporate funding for racial equity and justice has become exponentially larger — and more urgent — than what companies have committed to in the past.”

Companies tend to be big donors during times of crisis. But traditionally, Grabois noted, large corporations funded mainly educational and cultural groups, while donating comparatively little to racial equity causes. Dipanjan Chatterjee, a brand analyst at Forrester Research, suggested that “long-simmering anguish and anger, agitated by a relentless political rhetoric that overtly flirted with white supremacy, created a perfect storm for Floyd’s death to transform Black Lives Matter from a political to a human issue."

Since late May, Grabois said, financial commitments by companies to racial equity causes have grown “exponentially larger” than any other cause other than COVID-19. A report by McKinsey & Company, which tracked corporate responses from May to October, found that of the top 1,000 U.S. companies, 18% made internal commitments, like diversifying their hiring, and 22% pledged to promote racial equity through donations or other means.

Including pledges of business investments, the report found $66 billion was committed to such causes. Nearly 80% of those commitments targeted affordable housing and business development, with 86% of the money coming from the financial services industry.

For some brands, like Ben & Jerry’s, the donations were extensions of long-standing commitments to racial justice. For others, the pandemic and protests led them to face “the kinds of really difficult social issues” that many had previously preferred not to engage with, said Melissa Berman, CEO of Rockefeller Philanthropy Advisors.

Berman suggested that some pressure has come from millennial and Generation Z consumers who increasingly want the money they spend and invest to be used in ways consistent with their values. A survey last year by the research firm YPulse found that 69% of these younger buyers believe that brands should engage with the Black Lives Matter movement.

“Consumers spoke up for racial justice, and they demanded that the brands they patronize do the same,” Chatterjee said.

Companies have also faced a push from employees. Whole Foods was sued by employees for barring them from wearing Black Lives Matter face masks because its dress code prohibits visible slogans or messages. (A federal judge later dismissed most of the lawsuit.)

Adidas was the target of complaints that it lacked racial diversity. The sportswear company responded with plans to fill 30% of new positions with Black and Latino candidates and to invest $120 million to address racial disparities through 2025.

Adidas says it’s donated $2 million to a small business fund created by Beyonce’s BeyGOOD initiative and the NAACP. And it plans to give an additional $10 million to that or other initiatives and $2 million in scholarships to Black and Latino students within three years. The company, though, has yet to disclose the percentage of Black and Latino candidates it’s hired since its pledge to diversify its ranks.

Others, like Facebook and the cosmetics company Estée Lauder, have also vowed to increase the number of Black employees in their workforces or leadership positions.

Yet any sudden burst of giving from companies not known for donating to racial justice causes isn't without risk. Marlette Jackson, a diversity director at Virgin Pulse, part of the Virgin Group conglomerate, says consumers will have to decide for themselves whether a company is contributing to equity causes as an expression of its values or is merely trying to appease customers and employees.

At the same time, experts say, there’s no consensus on how to define racial equity giving. They also note that tracking the contributions can be difficult. Typically with corporate philanthropy, unlike with foundations or public charities, details tend to be sparse. And Candid said it’s unclear, at least from initial announcements, where about $3.7 billion is going.

Well-known organizations like the NAACP Legal Defense and Educational Fund and the National Urban League and historically Black colleges and universities have received some portion of the corporate donations. But determining how many or which Black-led organizations are actually benefitting can be hard because tax filings for nonprofits don't include racial identifiers, said Shena Ashley, head of the Urban Institute’s Center on Nonprofits and Philanthropy.

“I have all the data that we have in the nonprofit sector," Ashley said, "and I still don’t know the number of Black-led organizations that exist in the United States.”

Still, JPMorgan has committed $2 billion over five years to support the recovery of Black, Latino and other underserved communities. The company says at least $42.5 million in grants and low-cost loans will help expand its Entrepreneurs of Color Fund, which helps minority-owned businesses attract capital.

Other large commitments are coming from banks like Citi, PNC, Bank of America and Goldman Sachs. The first three have each pledged investments of $1 billion or more toward homeownership and other financing. Goldman Sachs says it will give $100 million as part of a 10-year $10 billion investment to advance racial equity and economic opportunities for Black women.

Citi’s CEO Michael Corbat said that closing the racial wealth gap and addressing racism is “the most critical challenge” in creating an inclusive society. Citi says it’s donated $25 million in profits from its participation in the government’s Paycheck Protection Program to the company's foundation, which plans to give it to nonprofits assisting minority-owned businesses.

The racial disparities in wealth — the typical Black family holds just one-eighth the wealth of a white family — are a common theme expressed by financial industry executives. PayPal, for example, pledged $500 million to create a fund for minority businesses that will help “drive financial health, access, and inter-generational wealth creation.” And Netflix says it wants to help reduce the racial wealth gap by putting 2% of its cash holdings into financial institutions that directly support Black communities.

Shelley Stewart III, a McKinsey partner who leads the company’s research on Black economic mobility, said he’s struck by the “number of companies jumping into the fray and recognizing that they’ve been part of the problem and not yet part of the solution.”

Still, while well-known civil rights and social justice organizations and HBCUs have drawn the interest of donors, Ashley, of the Urban Institute, says it remains unknown how much funding smaller community-based groups will receive. Donors are still learning about organizations “beyond the top players,” she added.

Another difficulty is measuring the success of the philanthropy, the results of which can take years.

“If the emphasis is on addressing the root causes of racial inequities and eliminating differential outcomes,” said Leslie Pine, a managing partner of the philanthropy advisory group The Philanthropic Institute, “those things don’t change overnight.”