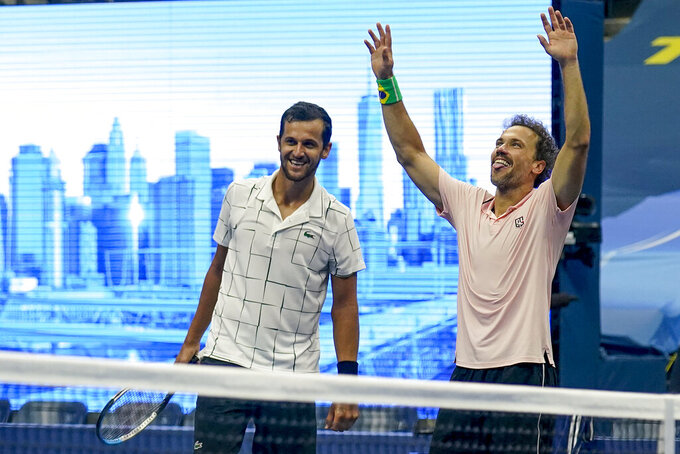 Mate Pavic, of Croatia, left, and Bruno Soares, of Brazil, celebrate winning the men's doubles final against Wesley Koolhof, of the Netherlands, and Nikola Mektic, of Croatia, during the US Open tennis championships, Thursday, Sept. 10, 2020, in New York. (AP Photo/Seth Wenig)

. (AP) — Bruno Soares completed his comeback from a bout with COVID-19 by winning a U.S. Open title.

The Brazilian teamed with Mate Pavic of Croatia to beat Wesley Koolhof of the Netherlands and Nikola Mektic of Croatia in the men's doubles final Thursday, 7-5, 6-3.

Soares said the virus caused him only mild symptoms, and he isolated for two weeks before being cleared. But he said the illness left him a little out of shape, and he played only one match with Pavic before the Open, losing in the first round of a warmup tournament in New York.

“The one thing that was tough was 14 days without doing anything, and then you just come straight here,” said Soares, who is 38. “I was just very happy, to be honest, to be playing here.”

Because of the pandemic, there were no fans to cheer the champions during the tournament's first trophy ceremony.

“Tough year for everyone,” Soares said to the empty stands. “Hopefully we get back to normal soon, but we're very grateful for everything.”

The Grand Slam title in men’s doubles was the third for Soares, the second for Pavic and their first together. They entered the tournament with a modest record together of 18-15 since joining forces last year.

"This proves that working hard and being patient paid off for us," said Soares, who also won the U.S. Open title with Jamie Murray in 2016.

Soares and Pavic won by breaking serve once in each set. In the opening set, Koolhof missed an easy volley that would have forced a tiebreaker, and Soares hit a forehand return cross-court into the corner for a winner on break point to clinch the set.

Pavic flicked a lob winner over fellow Croatian Mektic for another break to give his team a 4-2 lead in the final set. Pavic served out the match at love.

The champions trailed in each of their first two matches, including in the second round, when they were down a set and a break before rallying.

“We did have tough matches,” Pavic said. “We got through tough moments, and are very happy to be here lifting the title.”

He and Soares agreed the absence of fans didn't diminish their excitement.

“Walking on court, I had the same goosebumps to be in a Grand Slam final again,” Soares said. “Winning, same feeling. It’s a strange situation, but the trophy is a same. This Grand Slam title is going to be with us forever.”