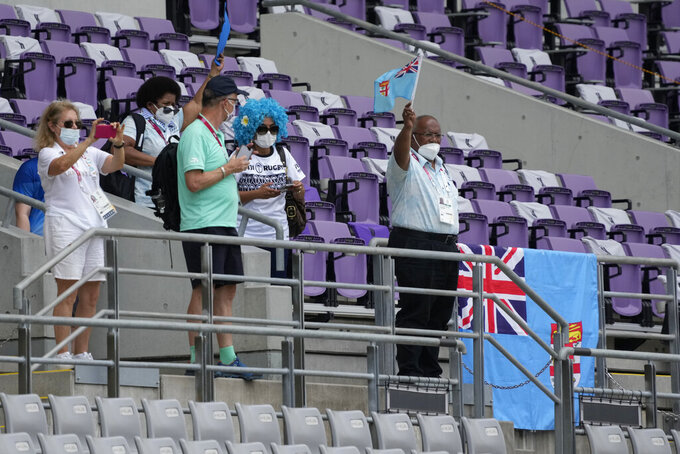 WELLINGTON, New Zealand (AP) — Emerging gingerly from their homes in a nation under curfew, Fijians cheered, sang hymns and danced in the streets Wednesday to celebrate the victory of their rugby sevens team at the Tokyo Olympics.

Fiji is battling a severe COVID-19 outbreak, with more than 25,000 cases and 200 deaths among a population of just over 900,000. With its health system under strain, officials have imposed a 6 p.m. to 4 a.m. curfew in a attempt to curb the rapid spread of the virus.

Fiji’s second consecutive gold medal in rugby sevens, following its success in the sport's inaugural Olympic tournament at Rio de Janeiro in 2016, provoked a spontaneous outpouring of joy in the nation’s cities and villages. Fireworks flashed in the night sky and daring revelers in the capital Suva flew flags from car windows as they circled among cheering crowds.

Fiji Broadcasting Corporation presenter Jaquee Speight tweeted: “Last Olympics we gathered in numbers, tears flowed and bells were rung. Tonight in the middle of a pandemic and (with) Fiji under curfew, pots and pans ring, fireworks go off in yards and the cheers from every house can be heard.”

The Fiji Village website showed a family in Nawaka Village near Nadi emerging from their home, carrying Fiji flags, singing and banging pots and pans. Another, more poignant, shows two small boys sitting in the yard of a neighbor’s house, unable to enter because of COVID restrictions, and watching the match on television through an open door.

Fiji issued a commemorative seven-dollar note after the win in Rio and Prime Minister Frank Bainimarama on Wednesday toyed with the idea of a $14 note to mark Fiji’s back-to-back sevens wins.

“The win is worth more than a gold to Fijians everywhere,” Bainimarama told Radio New Zealand. “Fijians love this game. It has always united us. (It) shows that we can achieve greatness no matter what the world may throw our way, even with COVID.”

Bainimarama noted that Fiji’s gold medal success had led to widespread breaches of the curfew but said “no-one seems to mind.”

“Everyone is happy in Fiji to watch the boys win the gold,” he said.

When England-born coach Ben Ryan guided Fiji to its first gold media in Rio, he was rewarded with a chiefly title and a grant of land. Fiji’s current coach, Wales-born Gareth Baber, is likely to be similarly rewarded when the team returns to Fiji, probably on Saturday if flights are available.

In an editorial, the Fiji Times newspaper lauded the sevens team’s victory against the odds and its effect on a weary nation.

“When all things are said and done, there can be no doubts about the impact of tonight’s victory on the people of our nation,” editor in chief Fred Wesley wrote. “Staring at a blank wall since April with the number of COVID-19 cases going out of hand, Fijians finally had something to feel good about. We were united as a nation.

“The fireworks and cheers, the screams of joy and laughter, they all signified a sense of appreciation and reflected how much this game means to us as a nation. Our love for the sport and the fact that we can actually beat the best the world has to offer, cuts through every imaginary demarcation line. It serves as bridge uniting every Fijian.

“We may be a tiny dot on the world map but we certainly punched high above our weight.”