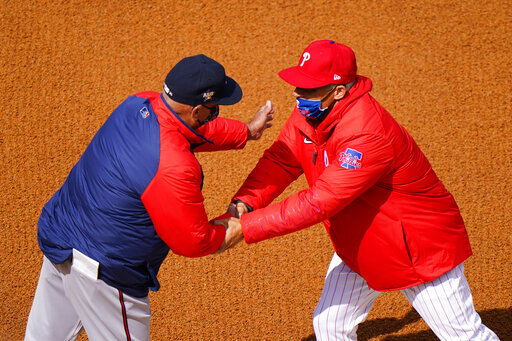 WASHINGTON (AP) — In case anyone thought, or at least hoped, the new baseball season would go off without a coronavirus-related hitch, there was bad news on opening day:

The Washington Nationals' game against the New York Mets was postponed Thursday after at least three of the 2019 World Series champions’ players tested positive for COVID-19.

“We’re still in the midst of a pandemic, and people need to still take this seriously. Unfortunately, it hit us, and we’ve got to take care of our own now,” Nationals manager Dave Martinez said. "All I can say is: Be safe, continue to wear your masks like they ask and know that this still can happen to anyone. It’s tough for us right now, but we’re going to get through it.”

General manager Mike Rizzo said Washington also has a fourth player considered a “likely positive.” He did not identify any of the players involved.

“For the most part, the whole team has been — we put them — in lockdown and they’re self-quarantining,” Rizzo said.

He said it was not yet known when the game will be made up, other than that it would not be played Friday, originally set up as a day off to allow for a makeup contest if there were an issue with Game 1, such as a rainout.

Rizzo said one of the players testing positive had a fever, while the others were not displaying COVID-19 symptoms. Contact tracing was continuing to see who else might have been exposed.

The teams are supposed to play Saturday and Sunday in Washington.

The Mets worked out at Nationals Park on Thursday, with pitchers throwing live to hitters.

“To be honest, it wasn’t a surprise. We’ve been in situations like this since last year,” Mets manager Luis Rojas said. “The health is the No. 1 thing still in the world. We’re taking care of ourselves. Everyone’s taking their mask everywhere. We’re doing everything we need to do.”

The news rippled across baseball as the 2021 season began.

“We have to tend to business and not let up," Atlanta Braves manager Brian Snitker said. "It’s just a reminder that this thing is still out there and real.”

Getting going during this portion of the calendar, and with plans to play a full 162-game slate, is quite a contrast from 2020, when spring training exhibitions were halted in March as the COVID-19 outbreak gripped the world. The sport eventually staged a truncated, 60-game regular season that began in July with zero spectators in stadiums and fake crowd noise coursing through speakers.

Now, with vaccines being widely distributed, fans are allowed back in varying numbers — including a full house for the Texas Rangers, which President Joe Biden told ESPN was a mistake — and a sense of normalcy seemed to be returning to the national pastime.

“A lot of things are opening up, you know, in the country and things like that. I think we’re all going to feel a lot better once we’ve had the multiple shots and the vaccinations, both rounds of that,” said Miami Marlins manager Don Mattingly, who received an injection Thursday.

“But for a team, it’s really, really dangerous. ... Your club losing multiple guys at one time, that’s really what can set you back to start your season. It messes with the roster, all kinds of things that you do,” he said. “So it is a little tricky area right now that we’re in, everybody leaving their camps and their bubbles and getting out. More travel. More access to other things."

Rizzo said he was not sure how his team's outbreak began. His team did not report any positive tests during six weeks of camp in Florida.

“I’ve got the utmost confidence that it was not a player breaking protocol," he said.

The team flight from Florida to Washington at the close of spring training on Monday created close contact among players and staff.

The Nationals — who finished tied for last in the NL East in the pandemic-shortened 2020 season — were supposed to send Max Scherzer to the mound to face New York’s Jacob deGrom on Thursday in a matchup between pitchers who own a total of five Cy Young Awards.

Scherzer said he was not on that team flight and traveled separately with his family.

“It’s a shame that we can’t play today, but we need to stay positive. I’ve talked to a lot of players and my concern is about their health and safety,” Washington's Martinez said. “This isn’t the first time we’ve been through some bumpy roads. We’ve been there and we’re going to come back from this and we’re going to play baseball.”