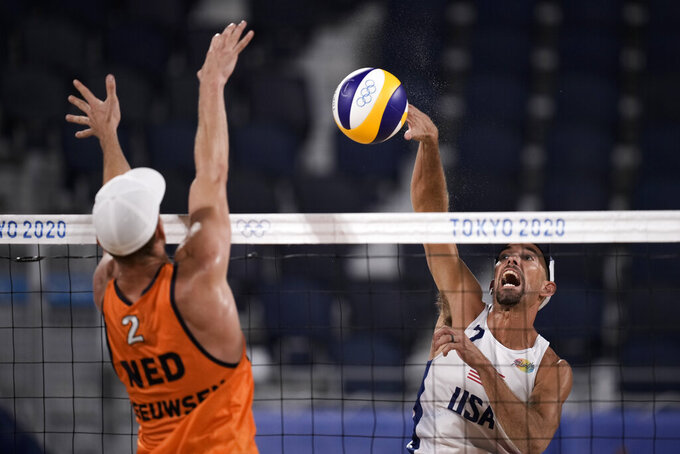 Robert Meeuwsen, of the Netherlands, blocks against Nicholas Lucena, of the United States, during a men's beach volleyball match at the 2020 Summer Olympics, Saturday, July 24, 2021, in Tokyo, Japan. (AP Photo/Felipe Dana)

TOKYO (AP) — Yoga with mom. Videos with the girlfriend. Cribbage with a friend in the Olympic Village. All of it over FaceTime from a 100 square-foot hotel room somewhere in Tokyo.

That’s the life of an athlete who spent years trying to make it to the Summer Games but instead is stuck in quarantine.

American beach volleyball player Taylor Crabb tested positive for COVID-19 when he arrived in Japan on Sunday and withdrew from the Olympics on Thursday, allowing teammate Jake Gibb to replace him with an alternate, Tri Bourne.

But Crabb still cannot leave his hotel, nor can he leave the country until 10 days after his first positive test. He spoke to The Associated Press about dealing with the boredom and trying to keep his mind off the “devastation” of missing the Olympics.

I’m at a hotel called The Day and Night. I’m not exactly sure where it is compared to the Olympic Village, but I’m stuck in a hotel room for 23 out of the 24 hours in the day. The only time I get to leave the room is to go down to the first floor when breakfast, lunch or dinner opens up and I can grab my food and bring it back up to my room. And those meals, we have a one-hour window for each meal to go down and grab it and come (right) back up.

This whole week has been devastating, just one thing after another. And the worst part is, when I found out I was positive and that I was going to be out of the games, the first thing I wanted to do was get out of here and get home to see my girlfriend, to see my mom and dad. But I’m still stuck here in this room. And it’s not a great living condition, physically and mentally.

I’ve got to put my bags on the other bed because otherwise I’ll be stepping all over my bags. Luckily, I had (USA Volleyball) ship over a memory foam topper for my room in the village, but they were able to get that over to me here. So the bed’s a little comfortable. USOPC has also dropped off better meals for me. So the last two days I haven't even left my room.

Jake and (coach Rich Lambourne) have been the best supporters I could ask for. Every day, they’re sending me videos of everything they’re doing so I can experience it with them. They ask me how I’m doing every single day, they include me now in their scouting reports. I’ll be going over it with them to help them prepare for games. And Tri, of course, right when he found out that I was out, was absolutely devastated. And he’s handled this like a champ. This isn’t easy for him, either. So all three of those guys are helping me out, helping me out as much as I can. And I can’t be more thankful.

I’m watching video against Italy right now. Today, I was doing that, and coming up with a scouting report. I’ll meet with Rich, our coach, to go over what we think and then we’ll present it to the guys tomorrow before the match.

There is a little weirdness that comes with it, obviously, but it still makes me feel important and part of the team, which is huge for me. Because if I didn’t have that, along with the devastation of not being able to play with them, that would have been worse for sure. It is helping, but it is still a little weird.

I have a million people helping me out, which I’m so thankful for. It’s actually very overwhelming at times the amount of support I have. My mom has been FaceTiming me and actually took me through some yoga. My girlfriend, she’ll watch some shows with me. And another huge person that’s been helping is Nick Lucena (another U.S. beach volleyball player), who has really nothing to do with our team. But he’s a good friend of mine and we play cribbage every day together. So it’s been great to have these people around me to help me take my mind off of the devastation.

(The support) coming from other players is, I have no words for it. As you can see from all the support, this is a huge deal for everyone — not just me, but the Olympics is huge for every single person. This is all of our dreams. And it makes me feel unbelievably supported when they’re seeing what I’m going through and being there for me. So I can’t thank them enough.

I’ve been trying to find some silver linings and I guess one of the good things that I tell myself is that the next Olympics is only three years away now instead of four. So we’re a little bit closer. That’s helped me get through this. And, yeah, that’s that’s my goal. But we still have a season to finish up this year with the AVP and maybe one more international tournament.

Crabb’s comments were edited for space and clarity.