Senate President Wilton Simpson, left, and Speaker of the House Chris Sprowls smile as they speak with members of the media after the end of a legislative session, Friday, April 30, 2021, at the Capitol in Tallahassee, Fla. (AP Photo/Wilfredo Lee) 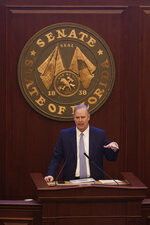 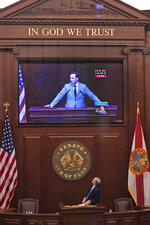 TALLAHASSEE, Fla. (AP) — A year ago, the Florida Legislature ended its annual session several days late amid fears for the future as the coronavirus pandemic was taking hold. This year, lawmakers closed out their session by midafternoon on the last of 60 days, passing a $101.5 billion budget Friday — and passing a bill that will save surfers some money.

In 2020, the new budget of $101.5 billion would have been a seemingly impossible amount. That is an increase of nearly $10 billion over the current state spending plan, bolstered by federal relief money and aided by a quicker-than-expected economic rebound.

It comes as Republican Gov. Ron DeSantis has lifted nearly all restrictions in Florida.

The Senate unanimously approved the budget before the House voted 117-1 in favor. The only “no” vote came from Republican Rep. Anthony Sabatini, who is know as a conservative firebrand.

“I don't buy this cheesy argument that the federal supplemental spending money somehow excuses government spending in insane ways,” Sabatini said in a phone interview. “It's just too much government and too much spending.”

DeSantis noted during the traditional handkerchief drop ceremony that marks the end of session that times are looking up compared with 2020.

“It was a very ominous time for our state and for our country. I remember we did not have this gathering,” DeSantis said. “The clouds were gathering on the horizon and we still weren't exactly sure what the future held.”

Last year, DeSantis vetoed a billion from the budget and ordered state agencies not spend all the money appropriated to them. There were dire predictions of budget deficits, especially since Florida has no income tax and heavily relies on tourism to pay the bills.

“Today, and what's been achieved in this session, says that this next year, 2021, the state of Florida's come roaring back,” DeSantis said.

Florida is apparently doing so well economically that the Legislature saw fit to expand the sales tax holiday on school and hurricane preparation supplies from seven to 10 days. Lawmakers went even further this year and declared there will be a sales tax “Freedom Week" that will eliminate sales tax on things like museum and music season tickets, fishing and camping gear, kayaks and surfboards.

While Democrats and Republicans agreed on spending, they will be back in two weeks to debate and vote on a gambling compact DeSantis signed with the Seminole tribe.

And Democrats were upset by bills that will make it more difficult to vote by mail and use ballot drop boxes.

They were also upset about a so-called “anti-riot” bill that creates new penalties for people who participate in violent protests. While that wasn't a major problem in Florida, Black Lives Matter protests around the country inspired the legislation.

So, despite all the kumbaya moments of the budget passage, there were a lot of moments that caused division. House Speaker Chris Sprowls showed a video on the final day highlighting moments of unity, and Democrats and Republicans applauded, but it's clear not everyone went home happy.

“That was an ugly bill,” Democratic Rep. Even Jenne said about the elections bill. “It qualifies as a very ugly, bad bill in my personal opinion. There's really no reason to do it other than to make it more difficult for Floridians to vote.”