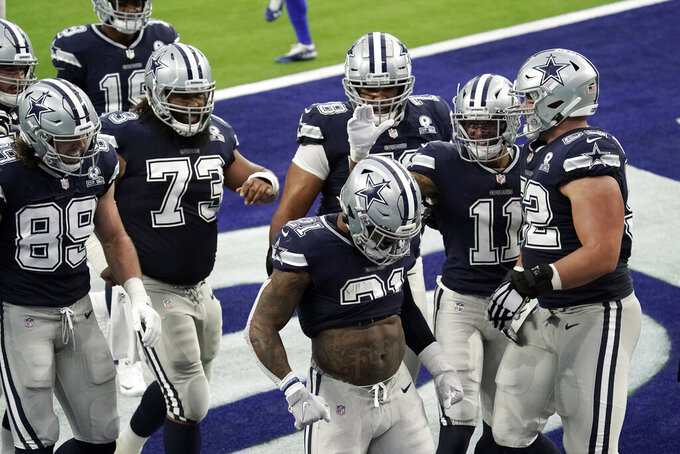 Dallas Cowboys running back Ezekiel Elliott (21) celebrates after scoring a touchdown against the Los Angeles Rams during the first half of an NFL football game Sunday, Sept. 13, 2020, in Inglewood, Calif. (AP Photo/Jae C. Hong ) 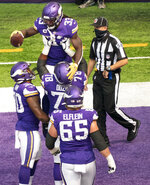 Dallas running back Ezekiel Elliott pulled up his jersey to reveal a new “Feed Me” tattoo on his stomach after scoring the first Cowboys touchdown of the season against the Rams.

The two-time rushing champion said he got the tattoo over the summer, with the message obvious based on the slogan that grew out of Elliott’s spoon-feeding hand signal at the end of his first-down plays. And while Elliott said it was “super painful,” it didn’t interrupt his attendance at summer throwing sessions at quarterback Dak Prescott’s house.

“I think like the next day we went and threw at Dak’s and it was all swollen and puffy,” said Elliott, who had 127 yards from scrimmage and both Dallas touchdowns in a 20-17 loss to Los Angeles. “It was awful. Not going to lie it was painful, but happy with the result.”

Defensive end DeMarcus Lawrence had to temper his enthusiasm for the new body art.

As for parental approval on the Elliott side, the 2016 All-Pro said: “At this point, my mom is like over getting mad at me for getting tattoos. Now she’s coming around to them.”

First-year coach Mike McCarthy seemed to be saying he didn’t see the part of the tape with Elliott’s celebration.

“I’m sorry I missed the view of the tattoo, but he’s an exciting player and brings great energy to our football team,” McCarthy said. “That’s all I have to say about that, I guess. Maybe I’ll get to see it down the line.”

The Niners announced a collaboration with NFL Mexico to expand their Virtual Flag Football Training Camp outside the Bay Area and run it in both English and Spanish.

The program usually serves more than 130,000 kids in the Bay Area with in-person camps. But with the COVID-19 pandemic eliminating in-person camps and driving a need for more digital content, the team worked to translate an on-demand four-week camp into Spanish — and make it available anywhere Spanish speakers are interested to learn more about football or the 49ers.

“The 49ers PREP Flag Football Virtual Training Camp is going to represent a very useful tool for the NFL Mexico office when promoting physical activation at home among our Flag Football Program participants,” said Jesus Alvarez, the NFL Mexico manager of youth football and community relations. “We are excited and proud to collaborate with the 49ers organization on this initiative. We believe boys and girls will really enjoy the program and expect it to have a positive impact on those kids and their families.”

The 49ers launched the English version of their virtual camp over the summer to provide kids an option with many fall sports postponed or canceled. The camp was available nationwide, as well in Australia and Canada.

The biggest worry about running backs in the NFL is wearing them down by handing them the ball too much. Neither the Tennessee Titans nor the 2019 rushing leader are worried.

Derrick Henry, who led the league with 1,540 yards on 303 carries last season, ran 31 times for 116 yards in the Titans’ season-opening win. It was only his third game with 30 or more carries in the NFL, and coach Mike Vrabel said Henry won’t be on any kind of pitch count.

“He gets himself in great condition, he understands the responsibility he has to the team to be able to sometimes carry it as many times as he did on Monday night,” Vrabel said. “Every game is different.”

Henry said he wants to take advantage of all the opportunities he gets. That’s why he trains as much as he does.

“I think they prepare you for moments like that, to be able to carry the load in games like that, physical games,” Henry said.

Henry carried at least 30 times in five games in 2015 at Alabama on his way to the Heisman Trophy, including 46 in the Iron Bowl, followed by another 44 the next week in the Southeastern Conference championship.

“I think once or twice it got up in the 50s. It’s been a lot, especially in high school,” Henry said of his career in Yulee, Florida.

Can Henry tell when he starts wearing down a defense the more he carries?

“Maybe if I look over when I’m in the huddle I can see them breathing hard, but that’s pretty much it,” Henry said.

The salary cap value of the featured running back has significantly decreased in recent years as teams, wary of the short shelf life for players at that dangerous position, have invested more in passing, pass catching, pass rushing and pass coverage. The 2017 draft class has proven that running backs can still be well worth it, though.

The Minnesota Vikings became the latest team to give their running back a second contract. An eight-figure annual average value, with a $63 million, five-year extension, was given to Dalvin Cook and signed the day before the season opener. Cook is now one of the eight running backs in the NFL with an annual average contract value of $12 million or more. Carolina’s Christian McCaffrey leads the list at slightly more than $16 million.

“Being in Minnesota as long as I can, that was important to me,” Cook said, adding: “I know how much Minnesota values me and how the front office thinks about me. I knew I did enough as a player. There was nothing else that could possibly not come from the situation.”

The Vikings, who picked Cook in the second round out of Florida State with the 41st overall selection, weren’t dissuaded from the long-term investment in Cook despite knee, hamstring and shoulder injuries over his first three NFL seasons. Those limited him to 31 of a possible 52 games, including the playoffs.

“I started playing football when I was 4 years old. To get to this point and see all the obstacles that I’ve been through — getting injured and just watching football and taking a step back from it to now being here — it just shows that if you keep working hard, there’s a prize at the end of the road. Just put your head down and work,” Cook said. “That’s what I did every day, and I’m still going to do to this day.”

THE TALL AND SHORT OF IT

The New York Giants had 15 players weighing over 300 pounds, the most in the league.

Dallas apparently doesn't have much faith in shorter players, with only three under 6 feet. Denver had the fewest 300-pounders with eight.

Coincidentally, all of those teams lost their openers.