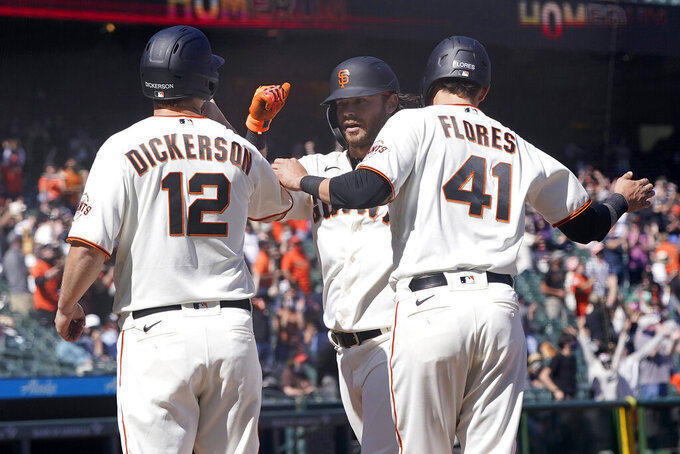 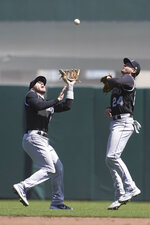 SAN FRANCISCO (AP) — Brandon Crawford has a bit of a cult following on his own team: that hair, others envy it. His swing is coveted, too.

Crawford delivered the decisive hit for a second straight day, connecting for a three-run homer in the sixth inning as the San Francisco Giants beat the Colorado Rockies 4-3 on Saturday.

Crawford also came through with a bases-loaded, two-run double in the seventh of a 3-1 win in Friday's home opener.

“I’ve done it a couple times, it doesn’t look as good as his,” Webb said.

It's not that easy.

“A lot of people don't get through the awkward stage where it's kind of in between,” Crawford said with a grin. "The short and long hair and people don't know what to do with it so they end up getting a haircut.

Ryan McMahon had put the Rockies ahead 3-1 with a two-run homer in the fifth.

Dickerson hit an RBI single in the third before Raimel Tapia’s single in the top of the fourth tied it. Tapia was thrown out at second by catcher Buster Posey trying to steal in the sixth — Posey's second such terrific throw on the day.

“It’s fun to watch. He’s got an incredible arm back there,” Webb said. “I’ve got to get better at being a little quicker to the plate.”

Seeing Posey fully healthy again is reassuring to everybody after right hip surgery in August 2018 that still bothered him the following season. He opted out of the coronavirus-shortened 2020 season to care for adopted premature twin girls.

Webb was done after five innings. He struck out six and walked two, giving up McMahon's homer among his eight hits and three runs.

Caleb Baragar (2-0) pitched the sixth for the win. Three relievers later, Jake McGee earned his fourth save overall and second in as many games facing his former Colorado club after recording the final out Friday following Johnny Cueto's 8 2/3-inning gem.

González did his job over five innings in making his first 2021 start after a pair of relief appearances. He allowed one run on four hits, struck out one and walked three.

“First inning I was a little erratic up the zone,” González said. “I’m happy I settled in. I started commanding the ball a lot better, my fastball, I had those guys off balance the rest of my outing.”

Giants infielder Donovan Solano received his Silver Slugger award as the top-hitting National League second baseman during a pregame ceremony on the field.

Rockies: Colorado placed INF/OF Chris Owings on the 10-day injured list with a sprained left thumb and manager Bud Black said he would know more Sunday from MRI results. “Last night we were hoping that the swelling would subside and the pain would decrease overnight,” Black said after the game. “He got some treatment this morning. ... We're hoping for just a sprain and nothing else to the joint and the bones.”

The Rockies selected the contract of INF Alan Trejo from the club's alternate training site. The Rockies designated LHP Phillip Diehl for assignment.

Giants: 3B Evan Longoria returned to the lineup after sitting out Friday's home opener with side effects from the one-dose Johnson & Johnson COVID-19 vaccine. ... 2B Tommy La Stella made his home Giants debut and batted leadoff after missing two games with stiffness in his upper back.