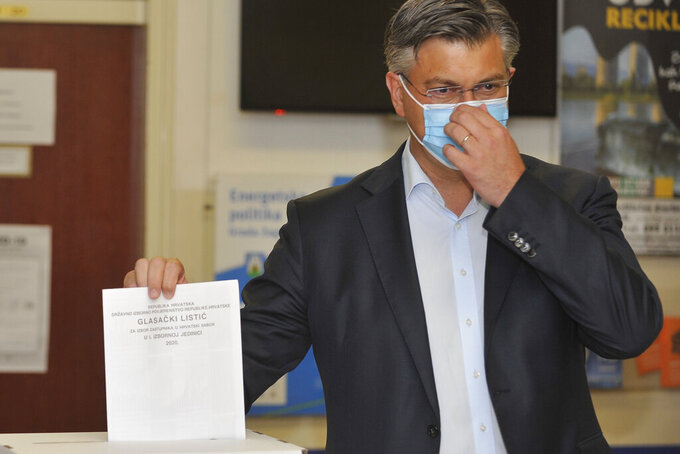 Andrej Plenkovic, Croatia's Prime Minister incumbent casts his ballot at a polling station in Zagreb, Croatia, Sunday, July 5, 2020. Amid a spike of new coronavirus cases, voters in Croatia cast ballots on Sunday in what is expected be a close parliamentary race that could push the latest European Union member state further to the right. (AP Photo)

With over 90 percent of the vote counted, the governing Croatian Democratic Union, or HDZ, won 66 seats in Croatia's 151-seat parliament and is likely to form a new coalition government with smaller right-wing groups.

Andrej Plenkovic, the acting prime minister and HDZ leader, praised what he described as a “great result and a great victory.”

"Such a result for the HDZ, which is our victory, is not only great, but an obligation,” Plenkovic said. “It is an obligation because we had a tough mandate full of challenges behind us, and challenges ahead of us are even bigger.”

An alliance led by the liberal Social Democratic Party, or SDP, the main opposition party, won 41 seats while in third place is the right-wing Homeland Movement led by folk singer Miroslav Skoro with 16 seats.

SDP leader Davor Bernardic conceded the defeat and suggested he would resign the leadership position.

The Homeland Movement was recently formed and swiftly gained popularity despite public outrage over some of its staunchly hard-line and nationalist views. The party is believed to have chipped away some of the votes from HDZ, which has dominated the political scene in Croatia since gaining independence from the Serb-led Yugoslavia in 1991.

Croatia has faced a surge in coronavirus cases that followed reopening of the country's borders and easing of lockdown rules, struggling to salvage its main source of revenue — tourism along the Adriatic Sea coast.

The election turnout was 46 percent, the lowest in the country's 10th parliamentary election since gaining independence from the Serb-led Yugoslavia in the 1990's.

There was no social distancing or wearing masks during the victory celebrations by the ruling party officials and its supporters.

A country of 4.2 million people, Croatia has kept the outbreak largely under control, reporting 113 deaths and around 3,100 confirmed infections. But Plenkovic was criticized over an outbreak at a tennis tournament organized by top-ranked Novak Djokovic in the coastal town of Zadar.

About 3.8 million people were eligible to vote. Voters were advised to take their own temperature and stay away from polling stations if they had a fever.