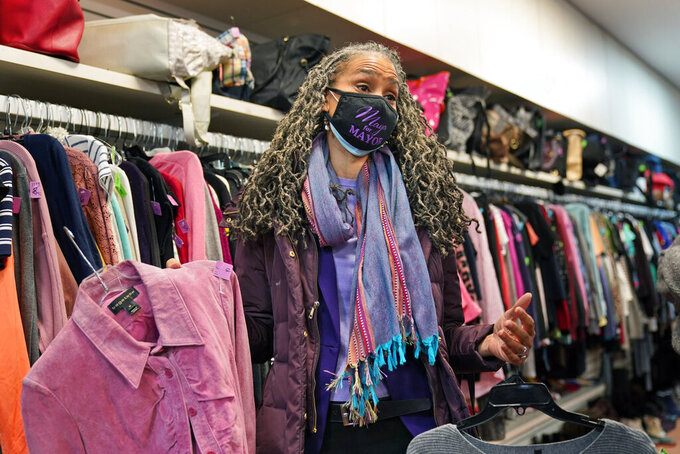 New York City mayoral candidate Maya Wiley shops in a thrift store before getting a tour of the Little Sisters of the Assumption Family Health Service in New York, Friday, Feb. 12, 2021. Wiley joins a crowded Democratic primary field that includes longtime elected officials and veterans of the administration of Mayor Bill de Blasio, who is barred by the city charter from seeking a third term. The Democratic mayoral primary is scheduled for June 22. (AP Photo/Seth Wenig)

NEW YORK (AP) — New York City’s next mayor will face challenges as big as any in city history, including leading the recovery from the coronavirus pandemic and tackling centuries of racial inequity in policing, education and health care.

Will voters choose a seasoned administrator, a veteran elected official, a business-friendly moderate or a flashy newcomer like Andrew Yang?

With the Democratic primary that will likely determine the winner barely four months away, the city is just starting to pay attention to what will surely be one of its most consequential elections.

The past year has been a tough one for the nation's largest city, which was overwhelmed by the pandemic and convulsed by protests following the death of George Floyd. Then came the exhausting 2020 presidential election and its turbulent aftermath.

Even some plugged-in New Yorkers are barely aware there is a mayoral race with more than two dozen candidates.

“It is my passion and my job to read the news and pay attention, and it’s just been a hard year, you know?” said Olivia Lapeyrolerie, a former press aide to the term-limited Mayor Bill de Blasio. “I think folks aren’t really going to start tuning in until it winnows down a little bit.”

The primary will be the city's first to be determined by ranked choice voting, in which voters can choose several candidates and rank them in order of preference. Another wrinkle is that the contest is being fought largely on Zoom and YouTube because of coronavirus restrictions.

A poll of likely Democratic primary voters by Fontas Advisors and Core Decision Analytics showed Yang leading each of his two closest competitors, Adams and Stringer, by more than 10 percentage points.

The poll was conducted from Jan. 20 to Jan. 25, shortly after Yang officially joined the race with a campaign video directed by “Black Swan” filmmaker Darren Aronofsky.

It was unclear whether Yang's early advantage will hold up as more people start paying attention to the contest.

Bruce Gyory, a Democratic political strategist and an adjunct professor of political science at the University of Albany, said political experts “thought that the voters would be focusing on the mayoral race here in New York by Thanksgiving, and instead they’re not likely to be focused on it until the end of February or early March.”

Yang, 46, who rode his universal basic income proposal to a decent showing in the presidential race, has already drawn negative media coverage for never voting in a New York City mayoral election — although he has lived in the city since 1996 — and for spending much of the pandemic in his vacation home north of the city.

“I don’t know that the voters care as much as the pundit class about that, but we’ll see," said Gyory.

Adams and Stringer, two veteran elected officials who are both 60 years old, were considered the front-runners before Yang entered the race.

Adams, a former police officer who served four terms in New York's state Senate before winning the borough president's job in 2013, is a longtime critic of police misconduct running as a pro-business candidate.

If calls for racial justice motivate voters to elect the city's second Black mayor, their choices include Adams, McGuire and Wiley.

Stringer, who has held elective office for nearly three decades as a state Assembly member, Manhattan borough president and city comptroller, is campaigning on his experience while also soliciting endorsements from younger, progressive lawmakers like freshman Rep. Jamaal Bowman.

McGuire, 64, is a former vice chairman at Citigroup and a first-time candidate who was recruited to run for mayor by business leaders looking for someone more sympathetic to their interests.

He launched his bid with a campaign video directed by supporter Spike Lee.

McGuire, who was one of Wall Street's highest-ranking Black executives before stepping down to run for mayor, is the only top-tier candidate not participating in the city's public financing program, which means he isn’t subject to spending limits.

Donovan, 55, a former city housing commissioner, served as secretary of Housing and Urban Development and then as director of the Office of Management and Budget in the Obama administration. He has cited his ties to Obama so frequently on the virtual campaign trail that McGuire called him “Shaun Obama” sarcastically at an online forum.

Three women in the race have served in de Blasio's administration.

Wiley, 57, worked for the NAACP Legal Defense and Educational Fund and the American Civil Liberties Union before being appointed counsel to the mayor in 2014.

Garcia, 50, headed the city's sanitation department from 2014 to 2020, winning praise for her leadership of a department that New Yorkers are quick to criticize if the garbage isn't picked up or the snow isn't plowed.

Loree Sutton, 61, is a retired Army brigadier general and former head of the city's Department of Veterans' Services.

Kathryn Wylde, president of the Partnership for New York City, a business group, said the lack of face-to-face campaigning could hurt candidates who aren’t already known to voters.

The ranked choice system may help Yang because voters know him from his presidential campaign and will list him second or third if he’s not their first choice, said Lapeyrolerie, who is now with public relations firm SKDKnickerbocker.

The Democratic primary winner will be the strong favorite in a city where Democrats far outnumber Republicans, but the race for the Republican nomination will be competitive too.