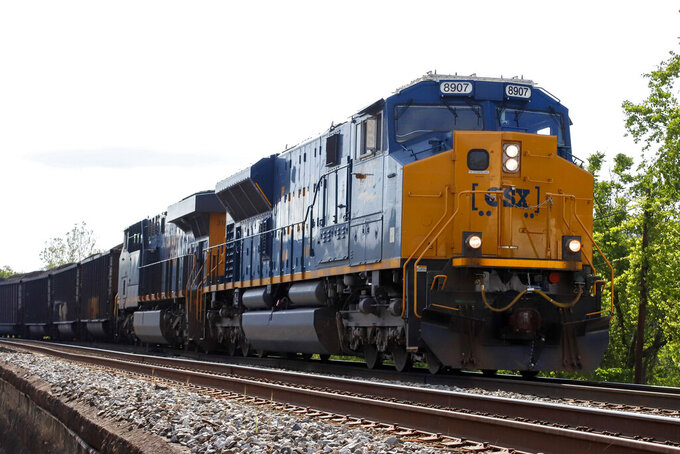 The results topped Wall Street expectations. The average estimate of seven analysts surveyed by Zacks Investment Research was for earnings of $1 per share.

The railroad said it cut its quarterly expenses 7% to $1.61 billion as fuel and labor costs both decreased.

Strong demand for deliveries of shipping containers — known as intermodal shipments — which were up 11%, helped offset weakness in nearly every other category of freight in the quarter. Volume was positive overall for the first time since before the pandemic began. In last year's second quarter, volume fell 20% when many businesses were shut down as officials sought to limit the spread of COVID-19.

CSX CEO Jim Foote said he expects the economy and rail shipments to grow in 2021 — especially in the second half of the year — but it is hard to tell now how much growth there will be. Railroad officials said only that they expect volume to grow more than the overall U.S. economy — in terms of the gross domestic product — will this year.

“It’s difficult to really draw a clear line of sight to the economy other than it seems to be continuing to improve,” Foote said. “All of this I believe is related to getting the virus under control. We’re optimistic, but really we have to take it day by day.”

In a sign of that optimism, officials at the railroad said they are increasing their hiring a bit at the start of the year to make sure they will have trained employees in place to handle any growth in the second half of 2021.

As the coronavirus continues to spread across the country, Foote said CSX has to deal with sometimes having several hundred people out sick or quarantining in a given location. That forces the railroad to try and shift the work that would have been done at that site to another location along the railroad.

“I think that just highlights some of the challenges the business is having and that the pandemic is still causing issues,” Edward Jones analyst Jeff Windau said.

CSX Corp. shares were little changed in after-market trading after the release of the earnings report.