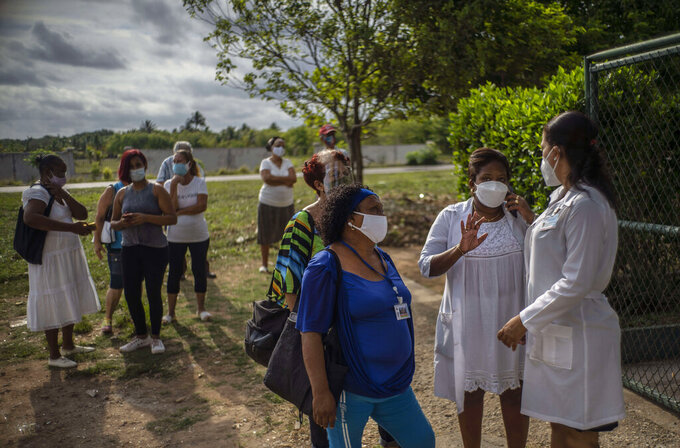 People wait to be vaccinated with the Cuban Abdala vaccine for COVID-19 outside a doctors' office in Alamar on the outskirts of Havana, Cuba, Friday, May 14, 2021. Cuba has begun to immunize people this week with its own vaccines, Abdala and Soberana 02, the only ones developed by a Latin American country. (AP Photo/Ramon Espinosa)

HAVANA (AP) — The jab didn't even hurt, and Mabel Aguilera figures it may finally let her see granddaughters on the other side of Cuba who she hasn't glimpsed during many months of pandemic restrictions.

“Sometimes I thought I wouldn't be able to stand not seeing my granddaughters,” said the 75-year-old woman, who got the shot at a clinic near her Havana home and has had to make do with phone calls and social media to keep in contact with relatives in the island's far east.

“Talking is not like touching them,” she said Friday while in a post-inoculation observation area. They send me photos on Facebook but that’s not enough,” she added on the verge of tears.

Aguilera is among hundreds of thousands of Cubans who have begun receiving new, locally produced vaccines against COVID-19 in the past few days as the socialist government has ramped up an inoculation campaign — even before releasing formal Phase III data on the vaccines' effectiveness and safety.

The campaign is being closely watched by many across Latin America and the world who see Cuba's vaccines as a possible way to ease global shortages.

The island’s health minister, José Angel Portal Miranda, announced on May 7 that officials are still processing information from the unusually large Phase III trials of the two vaccine candidates, which covered 400,000 people overall. But he said that beginning mass vaccines now "has more benefits than risks. ... The number of sick and deceased is going to decrease.”

Officials also have not given data on results from trials in other countries, such as Iran, that were reportedly testing the Cuban candidates.

The vaccines are a point of pride for a small and relatively poor nation of 11 million people that has prioritized its medical sector and has long boasted of exporting its own pharmaceuticals across the globe. While other Latin American nations are producing foreign vaccines under license, only Cuba so far has developed its own.

Officials say they pushed forward wide-scale inoculations due to early evidence that the vaccines are safe and work and because of a recent upsurge in coronavirus infections.

The clinic that served Aguilera in the Habana del Este neighborhood is using the Abdala vaccine, while some others are offering Soberana 02. Three other domestic vaccine candidates are also under study on the island.

“We have had very few adverse events. Some patients experience a little tiredness,” said Dr. Naicy Guzmán, director of the clinic, who lives nearby with her parents and children.

“All this is moving for me," she said. “My people, my brothers, my community will be vaccinated against this disease that has really shaken us. It has been a long and intense fight.”

While most other vaccines have relied upon a two-dose regime, Guzmán indicated that three doses will be applied at 14-day intervals to each person.

She said it will take little more than a month to vaccinate 20,490 of the 32,000 people served by her neighborhood clinic. Those under 18 and those infected with COVID-19 so far are excluded.

Portal said the government plans to start mass vaccines with some 700,000 people in seven Havana districts hardest hit by COVID-19 such as Habana del Este. From June through August, they plan to vaccinate another 1 million people in the capital.

Officials say inoculations are taking place as well in the provinces, with plans to cover 70% of the adult population by the end of August.

Cuba is experiencing an outbreak of infections that began last December after months in which some localities went weeks without cases. Since the pandemic began in March 2020, Cuba has reported 121,838 cases and 785 deaths. But 31,346 of those cases came last month.

The pandemic has devastated Cuba's tourism-dependent economy, with shrank by 11% last year.