With Cuomo under fire, No. 2 Kathy Hochul treads carefully 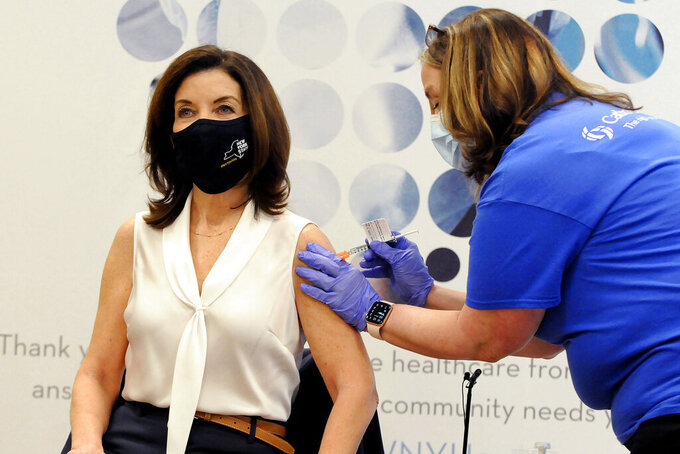 BUFFALO, N.Y. (AP) — As a chorus of top Democrats demanded New York Gov. Andrew Cuomo’s resignation over sexual harassment allegations last week, the woman who would succeed him if he stepped down did what she's done for most of her time in office: Kept a discreet profile.

Lt. Gov. Kathy Hochul delivered virtual remarks at an array of small events statewide. She sent tweets that hyped small businesses in the Adirondacks, reminded people to wear masks and urged them: “When it’s your turn, get vaccinated!” She herself got inoculated against the coronavirus Friday, drawing rare local TV coverage.

If the Democrat's schedule hasn't changed lately, what may be different is the number of people tuning in to learn more about the politician who would become the state’s first female governor if Cuomo can't hold on to power.

After two terms living deep in the shadow of a governor famous for demanding the spotlight, Hochul is an unknown quantity to most New Yorkers. Baruch College political science Professor Doug Muzzio said Hochul is probably preparing herself now in case she’s called on to step in.

“The next stage of the game is if he resigns and Hochul becomes governor. What does that mean? Who is she? What does she think?" Muzzio said. “New Yorkers are totally, totally unaware of this woman. I mean, I spent half my life focusing on this stuff. And I don’t know that much.”

Hochul briefly acknowledged the storm swirling around Cuomo on Tuesday in a statement expressing faith in an independent investigation into his workplace conduct, led by the state's attorney general.

“I trust the inquiry to be completed as thoroughly and expeditiously as possible,” she wrote. “New Yorkers should be confident that through this process they will soon learn the facts.”

Then she was back on message, tweeting out the latest vaccine eligibility criteria and plugging post-coronavirus pandemic revitalization efforts for overlooked upstate downtowns “oozing with charm & character.”

“Kathy has the difficulty of being loyal to the governor, as she always has been unflinchingly, but also remaining steadfast in her leadership to ensure that there’s no sexual harassment anyplace, anywhere, anytime,” said former U.S. Rep. John LaFalce, whom Hochul has called a mentor after working as his legislative assistant in Washington for three years in the 1980s.

“And to think, well, what would she do if all of a sudden she is governor, and then how do you begin to prepare for that?” said LaFalce, a Democrat who has remained close with Hochul and her husband, former U.S. Attorney Bill Hochul.

The granddaughter of Irish immigrants and daughter of a steelworker, Hochul has leveraged an upbeat and approachable style to pull off challenging electoral wins over her career.

Now 62, she was a town council member in Hamburg, New York, near Buffalo, for 14 years before becoming the Erie County Clerk in 2007.

In 2011, she was the surprise winner in a special election for a vacant congressional seat in a conservative western New York district, one of only four in the state that had gone for Republican John McCain over President Barack Obama in 2008.

In her unsuccessful run for reelection to Congress, Hochul was endorsed by the National Rifle Association and called herself a staunch advocate for sportsmen who would protect gun rights in Washington.

Earlier as the Erie County Clerk, Hochul had strongly opposed a proposal to allow people to get driver's licenses without having to prove they are in the country legally.

After Cuomo picked her as his choice for lieutenant governor, she moved to the left.

She backed New York’s SAFE Act, one of the nation’s toughest gun-control laws, as well as the state's new Green Light Law, which has let unauthorized immigrants get driver's licenses.

“Her willingness to shift politically does not suggest she would offer any kind of independent judgment,” the New York Times editorial board wrote in 2014 when it endorsed her primary opponent in the race for lieutenant governor, Columbia University law professor Timothy Wu.

Republican Assembly member Angelo Morinello is among the many state lawmakers who want Cuomo to step aside, but he spoke favorably about Hochul and her ability to bring perspective from beyond politically dominant New York City.

“Kathy is a very accomplished individual. For western New York, where she’s from and where I’m from, it would be a plus for us. She has experience and wherewithal and a staff that would be able to keep things going,” Morinello said.

“I called her a Joe Biden Democrat," said Len Lenihan, the former Democratic chair in Hochul’s home base, Erie County. “She just takes joy in serving. She, in all of her races in western New York, appeals to the base Democratic voter, but also has the ability to go beyond that."

“She's visited every every corner of the state, knows every town supervisor and village mayor,” Lenihan added. “She just has really leaned into this job and it’s a joy for her."

Known as a tireless campaigner, Hochul delivered endorsements for dozens of candidates nationwide in the latest general election and just wrapped up a term as chair of the 24-member Democratic Lieutenant Governors Association, which offers help to candidates hoping to join their ranks.

“She’s campaigning every minute of the day,” LaFalce said. “Nobody campaigns as tenaciously as Kathy does. Tenacious is the best word I can think of to describe her. When she sinks her teeth into something, whether it’s a campaign or an issue, she’s dogged.”

But, said LaFalce, “The most important thing in politics is likability. And everybody loves Kathy."