With Curry back, Warriors try to move on from worst record 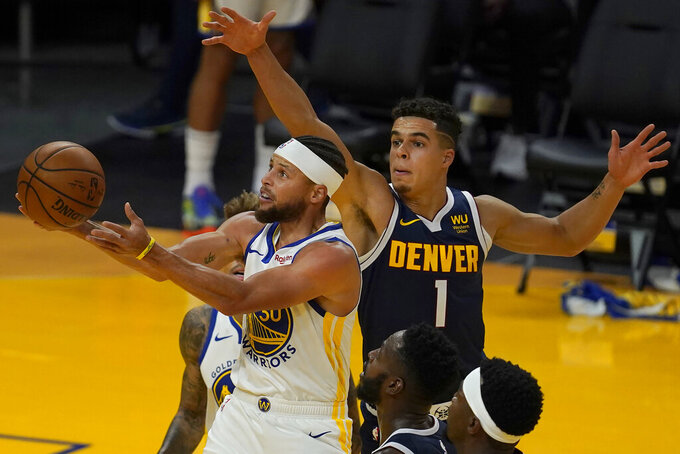 FILE - In this Dec. 12, 2020, file photo, Golden State Warriors guard Stephen Curry, left, shoots against Denver Nuggets forward Michael Porter Jr. (1) during the first half of a preseason NBA basketball game in San Francisco. The 32-year-old Curry has already said he wants to remain with the Warriors for the rest of his career and perhaps play until he's 40, but for now staying healthy in the present is a top priority. (AP Photo/Jeff Chiu, File)

SAN FRANCISCO (AP) — Don’t press Steve Kerr about last season. He would rather put it out of his memory and move on for good from the Golden State Warriors' last-place finish and missing the playoffs following five straight trips to the NBA Finals.

“We’re coming off a horrible season, so we want to bounce back and have a good year," Kerr said. "We’re sort of used to the noise, whatever you want to call it. Part of this job is the expectations, the judgment the criticism, the praise. It all lumps into one thing. It doesn’t really mean anything for us as we get started.”

The Warriors are coming off a very long layoff. They weren't one of the teams invited to the bubble in Florida, so they haven't played in nine months. They return still dealing with the news that Klay Thompson will miss another season because of a torn right Achilles tendon.

So everybody is eager for a fresh start. Especially Stephen Curry, who played only five games because of a broken left hand.

“We all had a down year last year, whether it was injuries or not what we were used to,” Curry said.

A potential upside to last season's injuries were that young players were forced into action and gained far more experience than they would have otherwise.

"Having the knowledge of our new players from last year will be very helpful in terms of trying to fit them into the puzzle,” Kerr said.

Golden State also drafted big man James Wiseman No. 2 overall, though he and Draymond Green were delayed by bouts with the coronavirus. Both returned to practice Monday.

“For what we have right now I love where we’re at," Curry said. "I love the fact that we have enough pieces, enough talent, enough experience to surprise a lot of people this year and try to compete at the top of the West.”

The 32-year-old Curry has already said he wants to remain with the Warriors for the rest of his career and perhaps play until he's 40, but for now staying healthy is a top priority.

The two-time NBA MVP missed 58 games after falling on his left hand Oct. 30 against Phoenix. He returned on March 5 to face the Raptors only to contract the flu and sit out again before the season was stopped.

“We’ve got Steph. That right there makes everything better. You’re talking about one of the greatest players of all time,” Andrew Wiggins said.

Curry and Wiggins, acquired at the February trade deadline from Minnesota, have yet to play enough together to find their groove.

Nobody is too concerned how things will come together as long as Curry is leading the group.

Thompson sat out last season recovering from knee surgery for a torn left ACL suffered in Game 6 of the 2019 Finals. He then injured his Achilles last month while playing on his own — a blow for him and the Warriors. Curry and Green were looking forward to having their All-Star trio back together.

“There's a hole in the lineup and there's a hole in our hearts, just because he's such a huge part of who we are,” Kerr said. “Those three guys really are the core of this whole thing, what's been built here over the last seven, eight years. So that part is going to be really tough for Steph and Draymond to get past. It's going to be hard for all of us to get past."

Wiggins played only one game with Curry last season, so they are eager to get rolling. With Thompson sidelined, Wiggins embraces a bigger load.

“I’ve got to do more. No one can do what he can do. He’s one of the best shooters of all time. We’ll fill that the best we can," Wiggins said. “... Coming into this season I feel the best I’ve felt ever. I definitely feel like I’m one of the leaders, too, going into Year 7.”

The 7-foot-1 Wiseman played only three college games as a freshman at Memphis, so Kerr knows there will be a big learning curve.

There was no summer league and training camp began later than usual — and he was forced to watch early on while recovering from the coronavirus.

“James has a lot to catch up on, but James' potential athletically is so dramatic that I imagine he'll have a chance to step in and help us because he's so athletic and dynamic,” Kerr said.