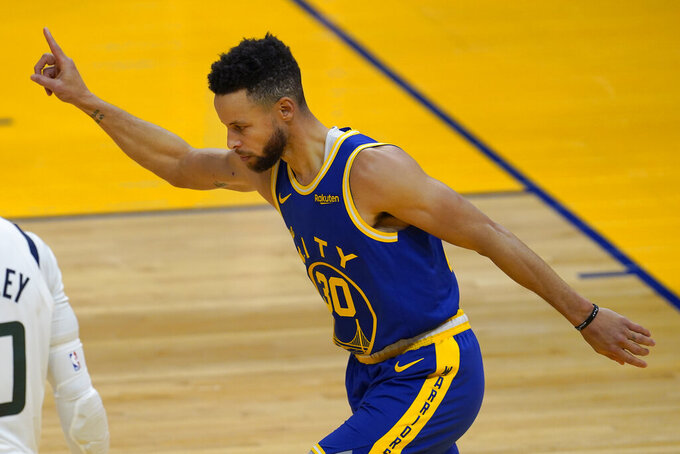 Golden State Warriors guard Stephen Curry (30) reacts after shooting a 3-point basket against the Utah Jazz during the first half of an NBA basketball game in San Francisco, Sunday, March 14, 2021. (AP Photo/Jeff Chiu)

The NAACP has given him its Jackie Robinson Sports Award. And, for the first time, the nation's oldest civil rights organization is recognizing more than one person by honoring the WNBA Players Association.

“This award is truly a humbling and honoring experience. It kind of came by surprise in terms of when you do things in the community and speak on things you believe, it's about the collective effort, not just myself but everybody who is around me in terms of accountability to change,” Curry said in remarks provided to The Associated Press by a team spokesman. Curry was unavailable for a formal interview while resting a tailbone injury suffered Wednesday night in Houston.

“You don't really do it for the acknowledgment, it's more so about the work that you're doing, that this is a great opportunity to continue to speak on things that are important and honor the legacy of Jackie Robinson and what he stood for and the change he was able to create and the barriers he was able to break and to continue these conversations,” Curry added. “So I'm appreciative of the acknowledgment, the honor and if it gives more inspiration and energy to keep changing things in terms of what needs to happen for the Black community across the country then I'm all about it.”

“Steph has certainly made people in the Bay Area and all over the world feel joy. His commitment to social activism and support of women are another part of the fabric that makes up the person that he is. I’m honored to know him for what he does both on and off the court,” Myers added. “And a much deserved congratulations to the women of the WNBA who continue to fearlessly pursue what is right.”

The Jackie Robinson award — named for the late Dodgers great who broke baseball’s racial barrier — recognizes athletes for their success as well as their commitment to social justice, civil rights and their communities.

“He has a strong platform and he utilizes it to the best of his ability,” said Curry's teammate, Kelly Oubre Jr. “He's a great individual.”

The WNBA players have been applauded for their activism in a unified movement that has featured kneeling for the national anthem, messages supporting Black Lives Matter and protesting the shooting of Jacob Blake in August by following the Bucks' lead in not playing.

“I am so proud of the WNBA players for this well-deserved recognition of their continued activism and advocacy for social justice and equality," WNBA Commissioner Cathy Engelbert said in a statement provided to the AP. "Their platforms are bigger than basketball, and they are amazing role models for the next generation of athletes and leaders. The WNBA Social Justice Council continues their important work and you can definitely ‘Count’ on more to come from the players.”

WNBA players also notably called out former Georgia Sen. Kelly Loeffler, a Republican and former co-owner of the Atlanta Dream, for her criticism of the league's social justice efforts.

Curry, too, applauded the women for their efforts.

“The acknowledgement of the WNBA and what they've stood for and how they've used their platform to be bold and courageous and speak for change at every opportunity, that acknowledgement is very much deserved,” Curry said. “They are game-changers and leaders in terms of using their collective voice and impact on and off the court, so a shoutout to them and all that they've done and are continuing to do in terms of leadership and using their voice.”

Warriors coach Steve Kerr, outspoken on many issues himself, admires the WNBA players for their activism.

“I love what the WNBA players have done. They've really taken the lead with creativity and unity in a lot of important causes, political causes but social injustice issues," Kerr said. “They've made their voices heard. They've done it very creatively and powerfully."

The awards are to be presented during next week's NAACP Image Awards Virtual Experience.