D-Day spirit of remembrance lives on, despite the pandemic 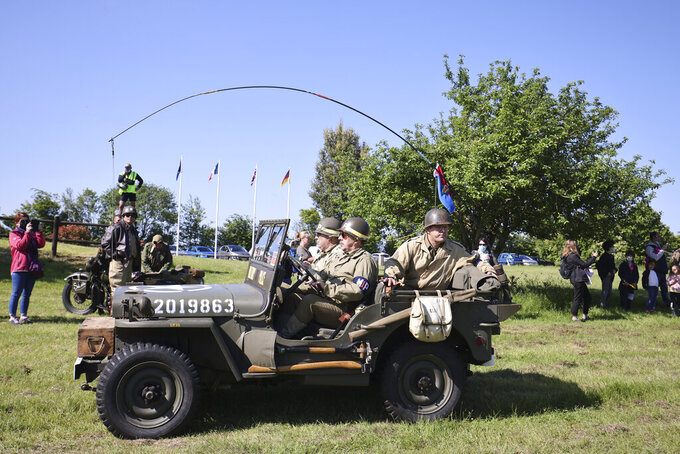 World War II history enthusiasts parade in WWII vehicles in Colleville-Montgomery,, Normandy, Saturday June, 5 2021 on the eve of 77th anniversary of the assault that helped bring an end to World War II. While France is planning to open up to vaccinated visitors starting next week, that comes too late for the D-Day anniversary. So for the second year in a row, most public commemoration events have been cancelled. A few solemn ceremonies have been maintained, in the presence of dignitaries and a few guests only. (AP Photo/David Vincent) 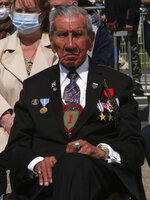 CARENTAN, France (AP) — In a small Normandy town where paratroopers landed in the early hours of D-Day, applause broke the silence to honor Charles Shay. He was the only veteran attending a ceremony in Carentan commemorating the 77th anniversary of the assault that helped bring an end to World War II.

Amid the coronavirus pandemic, this year's D-Day commemorations are taking place with travel restrictions that have prevented veterans or families of fallen soldiers from the U.S., Britain and other allied countries from making the trip to France. Only a few officials were allowed exceptions.

Shay, who now lives in Normandy, was a 19-year-old U.S. Army medic when he landed on Omaha Beach on June 6, 1944. Today, he recalls the “many good friends” he lost on the battlefield.

Under a bright sun, the 96-year-old Penobscot Native American from Indian Island, Maine, stood steadily while the hymns of the Allied countries were played Friday in front of the monument commemorating the assault in Carentan that allowed the Allies to establish a continuous front joining nearby Utah Beach to Omaha Beach.

Shay regretted that the pandemic “is interrupting everything.” He is expected to be the only veteran at Sunday’s anniversary day ceremony at the Normandy American Cemetery of Colleville-sur-Mer.

“We have no visitors coming to France this year for two years now. And I hope it will be over soon,” he told The Associated Press in Carentan.

Shay’s lone presence is all the more poignant as the number of survivors of the epochal battle dwindles. Only one veteran now remains from the French commando unit that joined U.S, British, Canadian and other allied troops in storming Normandy’s code-named beaches.

While France is planning to open up to vaccinated visitors starting next week, that comes too late for the D-Day anniversary. So for the second year in a row, most public commemoration events have been cancelled. A few solemn ceremonies have been maintained, with dignitaries and a few guests only.

Some French and a few other World War II history enthusiasts from neighboring European countries gathered in Normandy.

Driving restored jeeps, dressed in old uniforms or joyfully eating at the newly reopened terraces of restaurants, they're contributing to revive the commemorations' special atmosphere — and keeping alive the memory of June 6, 1944.

“In France, people who remember these men, they kept them close to their heart,” Shay said. “And they remember what they did for them. And I don’t think the French people will ever forget.”

On Saturday morning, people in dozens of World War II vehicles, from motorcycles to jeeps and trucks, gathered in a field in Colleville-Montgomery to parade down the nearby roads along Sword Beach to the sounds of a pipe band. Residents, some waving French and American flags, came to watch.

Sitting in an old sidecar, Audrey Ergas, dressed in a vintage uniform including an aviator hat and glasses, said she used to come every year from the southern city of Marseille, except for last year due to virus travel restrictions.

“We absolutely wanted to come ... it’s great pleasure, we needed it!” she said. “We were afraid that we might feel a bit alone, but in the end we were happy to do even small gatherings.”

“We missed it a lot. That's just fun, happiness, and also being able to pay tribute to all the veterans. That’s the main goal,” he said.

Henri-Jean Renaud, 86, remembers D-Day like it was yesterday. He was a young boy and was hidden in his family home in Sainte-Mere-Eglise when more than 800 planes bringing U.S. paratroopers flew over the town while German soldiers fired at them with machine guns.

Describing an “incredible noise” followed by silence, he remembers crossing the town's central square in the morning of June 6. He especially recalls seeing one dead U.S. paratrooper stuck in a big tree that is still standing by the town’s church.

“I came here hundreds of times. The first thing I do is look at that tree,” he said. “That’s always to that young guy that I’m thinking of. He was told: ‘You’re going to jump in the middle of the night in a country you don’t know’... He died and his feet never touched (French) soil, and that is very moving to me.”

More than 12,000 soldiers were buried temporarily in Sainte-Mere-Eglise during and after the Battle of Normandy, before being moved to their final resting place.

In the years following the war, local people were allowed to go to the cemeteries. “Often, people had adopted a grave because they had seen a name they liked ... They were a bit like friends,” Renaud said.

“Some, especially at the beginning when there were no coffins yet, had been buried in the ground. They had become the Normandy soil,” he added, in a voice filled by emotion.

On D-Day itself, more than 150,000 Allied troops landed on beaches code-named Omaha, Utah, Juno, Sword and Gold, carried by 7,000 boats. The Battle of Normandy hastened Germany’s defeat, which came less than a year later.

Still, that single day cost the lives of 4,414 Allied troops, 2,501 of them Americans. More than 5,000 were injured. On the German side, several thousand were killed or wounded.

This year, Col. Kevin Sharp came with a delegation of three other U.S. military officers from the 101st Airborne Division, based in Kentucky, to attend Friday’s commemorations in Carentan — the same division that took part in the D-Day operations there. His delegation received special, last-minute permission to come to France despite virus restrictions.

The U.S. military “really values the legacy of the soldiers and the paratroopers who came before us," he told the AP. “It was important enough to send a small representation here to ensure that our appreciation for their sacrifices is made known.”