Daniel Jones no longer Eli's backup, will start for Giants 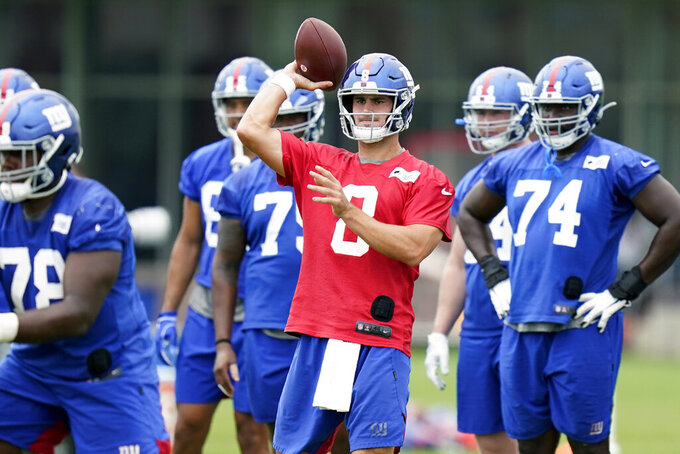 FILE - In this Wednesday, Aug. 19, 2020 file photo, New York Giants quarterback Daniel Jones, center, participates in a practice at the NFL football team's training camp in East Rutherford, N.J. Daniel Jones is heading into his second season with the New York Giants in a different position. The skinny kid from Duke is no longer the heir apparent at quarterback to two-time Super Bowl MVP Eli Manning, who retired after last season.(AP Photo/Seth Wenig, File)

EAST RUTHERFORD, N.J. (AP) — Daniel Jones is heading into his second season with the New York Giants in a different position.

The skinny kid from Duke is no longer the heir apparent at quarterback to two-time Super Bowl MVP Eli Manning, who retired after last season.

Jones is entering this season as the guy in charge of the offense. He took over that job early last season and started 13 of the next 14 games in a lightning quick rise to the top. He never had to think about it. After two weeks of being the backup, he suddenly was a starter.

For the past nine months, Jones has been in the spotlight, with most people wondering how he will do in a new offense being run by Jason Garrett for coach Joe Judge.

The answer will start to come on Monday night when the Giants (4-12) open this season overshadowed by the pandemic against the Pittsburgh Steelers (8-8).

“I feel prepared, our team feels prepared,” Jones said Wednesday after practice. “I’m certainly excited and looking forward to it. There’s a level of anticipation waiting for that game to come, but I feel prepared. I think we’re in a good spot as a team and as an offense. I feel comfortable going into Week 1. We’re all excited to get back out there.”

The sixth pick overall in the 2019 draft, Jones had an impressive rookie season. He set franchise rookie records with 459 passes, 284 completions, 3,027 yards and 24 touchdown passes. The passing touchdown total led all rookies.

On the negative side, Jones threw 12 interceptions and he lost 11 of his 18 fumbles in a season that ended with coach Pat Shurmur being fired. Judge, the Patriots' special teams coordinator, was hired in January.

Jones added 10 pounds to his 6-foot-5 frame in the offseason and now is buff, according to his 2019 roommate, defensive lineman and fellow first-round pick Dexter Lawrence.

The new coaching staff demanded ball security and Jones has worked hard on maintaining it.

“I’ve never been around a player who played a perfect game," Garrett said. “I’ve never been around a player who had a perfect practice. We’re always striving for that. We’re striving for excellence in everything we do, and that’s really what our objective is. We try to set high standards for our players. We try to give them the tools to achieve those standards. We try to instill belief in them, and we hold those to them each and every day. Daniel is one of those guys who’s really embraced that.”

The Steelers will be a major challenge for the Giants. They were fifth in the league overall last season, getting 54 sacks and forcing 22 fumbles.

With the COVID-19 pandemic limiting training camp and forcing the cancellation of the four preseason games, the Giants' offense has only practiced and had three scrimmages. It struggled in those uptempo events.