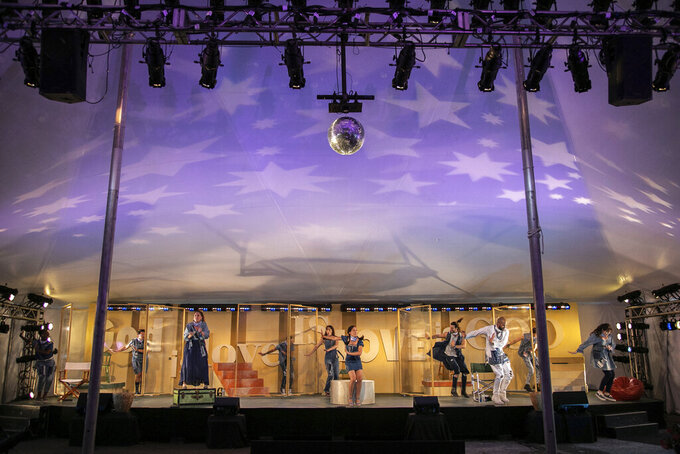 This 2019 photo released by The Berkshire Theater Group shows a scene from their production of "Godspell." The John-Michael Tebelak and Stephen Schwartz musical is celebrating its 50th anniversary this month, a golden milestone for a show with roots in the hippie era but which can still speak to those on TikTok. (Emma K. Rothenberg-Ware/The Berkshire Theater Group via AP)

NEW YORK (AP) — It will come as little surprise to its legion of fans that the first professional musical to be mounted in the U.S. during the pandemic was “Godspell.”

The Berkshire Theater Group in western Massachusetts put on a production in August with plexiglass partitions between the actors and temperature checks for the audience. Why “Godspell”? Its message of hope and love.

″'Godspell' just felt like the one," says the Berkshire Theater Group's Artistic Director and CEO Kate Maguire. “All of a sudden the story of ‘Godspell’ and what it’s about became more important.”

The John-Michael Tebelak and Stephen Schwartz musical is celebrating its 50th anniversary this month, a golden milestone for a show with roots in the hippie era but which can still speak to those on TikTok.

Some who traveled to western Massachusetts to see the pandemic “Godspell” were veterans from the show, like Peggy Gordon, who was in the original cast. “It was unbelievably emotionally powerful for us,” she says. Maguire told her she hoped the production would make Gordon proud. “I said, ‘You already have.’”

“Godspell” was an off-Broadway hit in 1971. It was made into a 1973 movie and jumped to Broadway in 1976, nominated for best score at the Tony Awards and a Grammy winner. One of the songs, “Day by Day,” reached No. 13 on the Billboard pop singles chart. It has been a springboard for everyone from Aaron Tveit, whose first real acting gig was on a “Godspell” tour, to Uzo Aduba, who was in a Broadway revival in 2011.

The musical is a retelling of Jesus’ ministry structured around a series of parables, mostly from the Bible’s Gospel of St. Matthew, with songs interspersed. Tebelak created it as a college project in 1970 while at Carnegie Mellon University and the student-led original cast helped fill it out.

“Although I’m not a very religious person, it was in many ways an act of love,” says Robin Lamont, who took the original show to Broadway and then to film. “I think many actors feel that way when they help create a show. But this was a particular love.”

The genesis of the show was sparked by an unhappy encounter: The spiritual Tebelak went to an Easter Sunday church service but was deemed inappropriately attired and was frisked by a parishioner who was an off-duty cop with the assent of the rest of the congregation.

“He was devastated. He walked out of there heartbroken and furious as many deeply spiritual Christian kids in the early ’70s,” says Gordon. It made him return to the message of Jesus, his relationship with the poor and his message of love.

The musical has fueled countless school, regional and community theater productions, a natural choice because of it's uplifting message and also because it calls for 10 actors in the ensemble and few props. It's nimble and athletic.

The original concept was a collection of clowns gathered at a playground — and Jesus clad in a Superman T-shirt with suspenders — but it can adapt. Lamont saw a production where the cast was doubled and another set in an abandoned church. Tebelak directed a production in the '70s in South Africa that challenged South African race laws by insisting that the cast be multiracial.

Most of the initial score’s lyrics were from the Episcopal hymnal and the songs were atonal. When it moved on to a bigger stage, Schwartz was brought in by producer Edgar Lansbury to write a new score, incorporating a variety of musical styles, from pop to folk rock to gospel and vaudeville.

When Schwartz returned, he had gems like “Day by Day,” ″All for the Best” and “All Good Gifts.” He charmed Gordon when he admitted that he couldn't improve her contribution, “By My Side.”

"His first words to me when we reassembled was ‘Peg, I tried to write something to go in the spot when you have ‘By My Side’ and I couldn’t come up with anything I like better so I’m keeping it,’” she says.

But the arrival of Schwartz, who would go on to fame as the composer of songs for “Pippin” and “Wicked,” was not initially viewed positively by some in the cast.

“I think we as a group were somewhat resistant and it did feel like someone was taking our baby and turning it into something horribly commercial. And in 1971, you know, that was sort of a dirty word,” says Lamont.

“In retrospect, I think we were incredibly foolish and naïve. Looking back, I think Stephen’s score made the show what it is, and it would not have succeeded in any stretch of the imagination without it,” she adds.

While it’s easy for “Godspell” to appear formless and allows for pockets of improv, Gordon knows better. “The show was meticulously constructed but constructed in a way to appear spontaneous,” she says.

Gordon recalls the invite-only dress rehearsal at the Cherry Lane — the first time they'd performed the new version in front of an audience. The cast came out, held hands and bowed at the curtain call.

“As we were bowing, I heard thunderous applause,” she says. “They were standing on their feet and they were applauding and they were crying. I thought to myself, ‘Oh, my God, I guess it's good!’ We never thought about it. We were so focused on trying to manifest John-Michael’s vision. I thought, ’Oh, I guess it’s good.'”

Many critics also were charmed. New York magazine called it “a frisky, exhilarating little show” and the Daily News said it was "cheerfully irreverent and spirited." The Boston Globe called it “'Hair' with a halo.'” As a sign that the show had entered the fabric of the nation, it was lampooned on “The Simpsons,” with Homer singing “Day by day/I've got three kids/ And two are OK.”

Gordon went on to have a varied career in theater, publishing, television, film and recordings, including writing music for soap operas and the show “Taboo in Revue.” But “Godspell” looms large.

"It sort of killed me for any other job because I just thought, ‘How do you go to another job when you authored your own character, you’re singing a song you wrote and doing all the choreography you created?’"

Lamont would later star on Broadway as Sandy in "Grease" and performed in Schwartz’s show "Working." But “Godspell” also looms large: “When I talk to people about their experience of doing ‘Godspell,’ actors just love it. I think maybe that really comes through,” she says.

Both Gordon and Lamont are proudly part of a network of the 10 original ”Godspell" companies. They have a private Facebook group and plan reunions every decade, with a big one this year. They reflect the spirit of “Godspell”: “We are a loud, noisy, incredibly active group of friends who adore each other,” says Gordon.