Day encouraged by returning players who put off NFL dreams 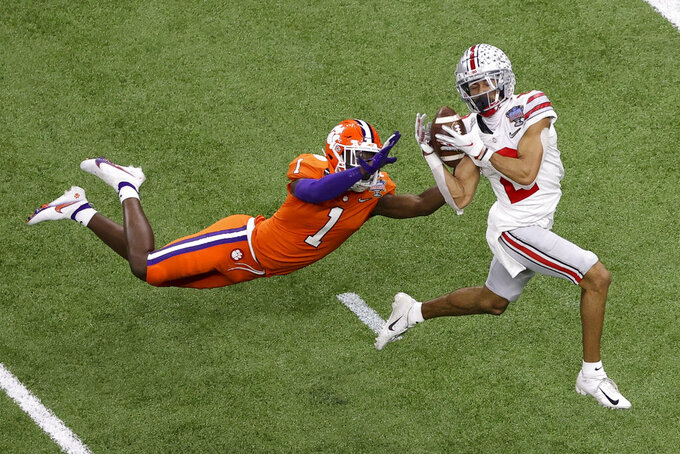 FILE - Ohio State wide receiver Chris Olave catches a touchdown pass in front of Clemson cornerback Derion Kendrick during the second half of the Sugar Bowl NCAA college football game in New Orleans, in this Friday, Jan. 1, 2021, file photo. After the announcements of quarterback Justin Fields, cornerback Shaun Wade and other early departures trickled out via social media after the loss to Alabama in the national championship game, the Buckeyes got a huge “stay” in Chris Olave, last season’s leading receiver who as a junior was draft eligible. (AP Photo/Butch Dill, File)

COLUMBUS, Ohio (AP) — Ohio State stars leaving early for the NFL happens every winter, but the bigger news this time might be about who decided to stay.

After the expected announcements by quarterback Justin Fields, cornerback Shaun Wade and other early departures trickled out via social media after the loss to Alabama in the national championship game, the Buckeyes got a huge “stay” in Chris Olave, last season’s leading receiver who as a junior was draft eligible.

In making the announcement via Twitter this week, Olave said “there are so many great memories but we’re not done yet.”

Besides Olave, starting offensive tackle Thayer Munford and defensive tackle Haskell Garrett said they would also be back, both taking advantage of an extra year of eligibility given to all players by the NCAA because of the COVID-19 pandemic.

Tight end Jeremy Ruckert and defensive end Tyreke Smith also decided to return for their senior seasons instead of entering the draft. Defensive tackle Antwuan Jackson and slot cornerback Marcus Williamson said they also would take advantage of the extra year of eligibility.

Seniors have until March 1 to declare if they want to stay for the extra year.

“I think it’s unbelievable,” Day said Friday. “For those guys who decided to come back, what a great opportunity for them. It just goes to show the maturity. They still have unfinished business here at Ohio State, they want to maximize themselves as players here in college but then also in the NFL.

“And I think that’s what a lot of them understood was that it’s one thing to go be able to play in the NFL, it’s another thing to be ready when you get there,” he said. “There’s so many people that just want to run to the NFL and go start making money, and that’s great. But at the end of the day, you have to perform and you have to produce.”

Garrett was a senior who emerged as a team leader and played well despite being shot in the face while trying to break up an altercation on the street in August. He and Smith give the Ohio State defensive line a couple of strong anchors for 2021, especially with defensive tackle Tommy Togiai opting for the NFL.

“2020 was a crazy year,” Garrett said in making his announcement via Instagram video. “Not only did I go through trials and tribulations, but our team did.”

Olave’s return is a seismic boost for the Buckeyes, who will be breaking in a new quarterback for the first time since the 2018 season. Olave will again team up with Garrett Wilson to form one of college football’s most dynamic receiving duos. During the pandemic shortened 2020 season, Olave had 50 catches for 729 yards and seven touchdowns, with Wilson right behind him with 43 for 723 yards and six TDs.

The returning Munford, along with Nicholas Petit-Frere will give the offensive line two returning starters, backed by other players who had significant playing time in 2020. Ohio State loses center Josh Myers and All-American guard Wyatt Davis, two stalwarts who opted for the NFL. They leave significant holes to fill.

Running back Trey Sermon, who had three tremendous games before being injured early in the 52-24 loss to Alabama, was a graduate transfer and announced he will enter the NFL draft. But Master Teague III, who began the season as the starter at running back, will return as a fourth-year junior.

Most of the preseason attention will be on the quarterbacks, with the trials beginning in spring practice, pandemic permitting. The competition will involve sturdy pro-style quarterbacks C.J. Stroud and Jack Miller III, two of the top prep signal-callers in the country that Ohio State snagged in the 2020 recruiting class. Five-star 2021 recruit Kyle McCord, similar in size and skills to the others, is expected to also compete for the job right away as an early enrollee.

Because the 2020 season was shortened and there wasn’t much mop-up duty to be had, neither Stroud nor Miller got much playing time. Day didn’t even get a good look at them because 2020’s spring practice lasted only a week before it had to be abandoned as the pandemic worsened.

“I wish we were further along,” Day said. “I wish they had gotten more game reps. You don’t really know what you have in a quarterback until they’re playing in a game. We’re going to have to find ways this spring between C.J., Jack and Kyle to give them game-like situations to figure out exactly what we’ve got.”