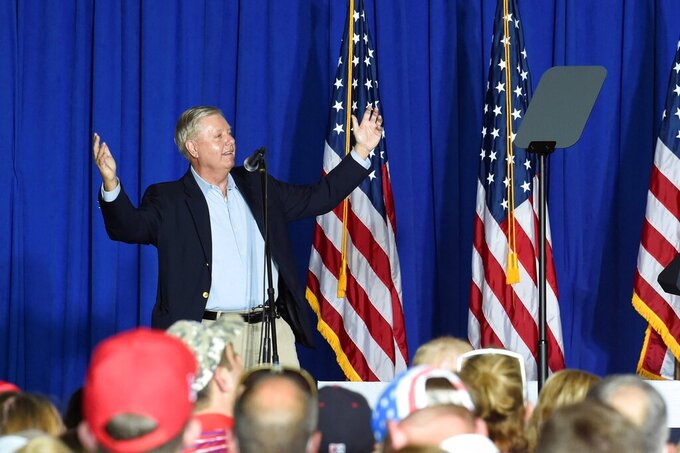 U.S. Sen. Lindsey Graham of South Carolina speaks ahead of an appearance by Vice President Mike Pence at a campaign rally on Tuesday, Oct. 27, 2020, in Greenville, S.C. (AP Photo/Meg Kinnard)

COLUMBIA, S.C. (AP) — Just days ahead of Election Day, Republican U.S. Sen. Lindsey Graham and Democratic challenger Jaime Harrison are meeting for their second and final debate in a Senate matchup that has shattered fundraising records and commanded national attention.

The two meet in Columbia on Friday night, four days before Tuesday's general election. So far in South Carolina, more than a million ballots have been cast, breaking 2016 records.

Graham and Harrison debated earlier this month. Harrison brought a plexiglass divider to that event, saying he needed to shield his podium because of Graham's recent exposure to other GOP senators who had recently tested positive for the virus.

A subsequent debate evolved into two back-to-back interviews after Harrison's threat to withdraw from the event over similar concerns related to Graham’s possible coronavirus exposure and Graham's refusal to retest for coronavirus, citing physician guidance that it would be unnecessary. Harrison is expected to bring the divider to Friday night's debate.

Harrison, an associate Democratic National Committee chairman and former lobbyist, is Graham's most stalwart general election opponent to date. A fundraising powerhouse, the Democrat has amassed a war chest of more than $100 million, skyrocketing past previous Senate fundraising records and blanketing the state with advertising and mailers.

Graham has acknowledged the toughness of the race, which some polls have shown as neck-and-neck, although the Republican has raked in cash of his own. Raising about $67 million, Graham's third-quarter haul of $28 million represented a quarterly record for any GOP Senate candidate. Third-party groups have poured in more money, resulting in ad saturation.

There was an undercurrent throughout the race over the battle to confirm Justice Amy Coney Barrett to the U.S. Supreme Court. As Senate Judiciary Committee chairman, Graham oversaw that contentious process, including a committee vote in which no Democrats participated and a largely partisan Senate floor confirmation.

The process kept Graham in the national spotlight for weeks, during televised hearings and media appearances to discuss the process. Answering a reporter’s question on Capitol Hill about his reelection contest, Graham made a plug for campaign contributions, a comment that drew an ethics complaint from the South Carolina Democratic Party.

Harrison, meanwhile, has portrayed Graham as a career politician, too long in Washington, and too far removed from the lives of his constituents.

Harrison has also highlighted Graham’s previous opposition to election-year high court nominations. Arguing that “elections have consequences,” Graham has said that he felt certain Democrats would do the same if given the chance.

Meg Kinnard can be reached at https://twitter.com/MegKinnardAP.