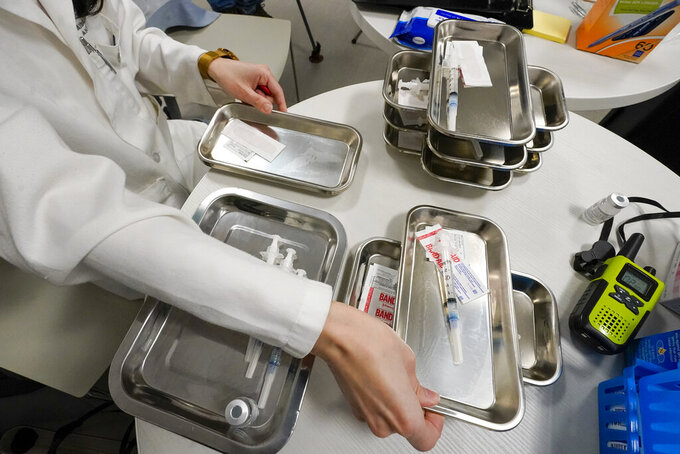 Pharmacist Mia Yu prepares syringes with the Moderna COVID-19 vaccine at a pop up site at Commonpoint Queens The Hub in partnership with the UJA- Federation of New York, Thursday, March 18, 2021, in New York. (AP Photo/Mary Altaffer)

The mayor's ire revolved around Cuomo's decision Wednesday to lift a ban on indoor fitness classes — just a day after de Blasio said it was still unsafe for groups of people to exercise together indoors.

“The state of New York continues to make decisions without consulting the city of New York or our health experts or any locality, and this is why we need local control,” said de Blasio, who has long chafed under Cuomo's broad power to set coronavirus policy.

De Blasio implied that Cuomo, who is facing sexual harassment allegations from several women, is easing coronavirus restrictions to curry favor with a virus-weary public.

A message was sent seeking comment from the governor's office.

Reporters were barred from a news briefing Thursday morning in which Cuomo announced a plan to let fans return to Yankees and Mets games this season.

In recent weeks, Cuomo has eased a variety of coronavirus restrictions, citing dropping hospitalization levels and increased availability of the vaccine. Right now, the New York City metropolitan area has one of the highest infection rates in the country, though things have improved substantially since mid January.

De Blasio spoke after getting the Johnson & Johnson one-dose vaccine during his daily virtual briefing at City Hall. “I could barely feel it,” he said after city Health Commissioner Dr. Dave Chokshi administered the shot.

Chokshi said city health authorities are concerned about Cuomo's decision to allow indoor fitness classes at a third of their regular capacity starting next week, “particularly because it’s an activity that combines being indoors, being in groups and not being able to easily and consistently wear masks that don’t get wet.”

Cuomo has rejected calls for his resignation from fellow Democrats, including New York’s two U.S. senators, Chuck Schumer and Kirsten Gillibrand, and has asked New Yorkers to await the results of an investigation headed by state Attorney General Letitia James.

James tweeted that she got her own vaccine on Thursday at a city Health Department clinic at a Brooklyn megachurch.