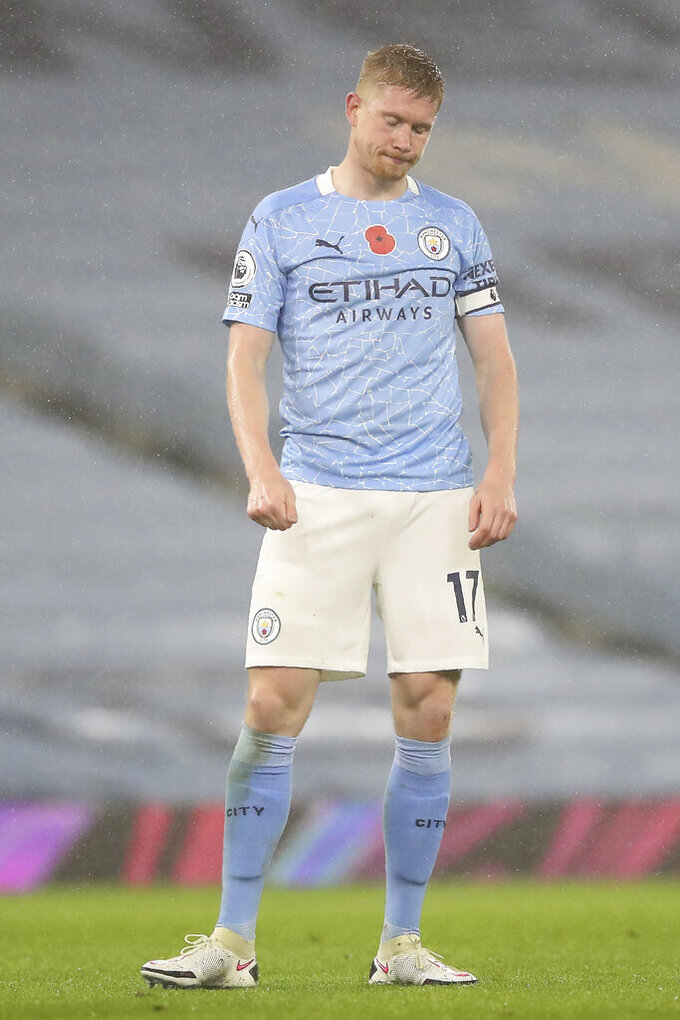 The playmaker added to his repertoire of assists by feeding Gabriel Jesus to cancel out a penalty from Liverpool striker Mohamed Salah.

But then, for the first time in four years after five straight converted penalties, De Bruyne missed from the spot.

Drawing 1-1 on Sunday was more damaging for City than the Premier League's third-place defending champions. Dropping points from four of its seven matches has left City already six points adrift of the summit, albeit with a game in hand.

“The result is no good for us, maybe for them," Gabriel Jesus said. "But we have to keep fighting,”

What had been an intense first half saw energy levels sap after the break in this first blockbuster matchup of the season between the most recent champions.

City had to fend off a formidable Liverpool front line. Rather than deliberating over whether to start Diogo Jota or Roberto Firmino, Jurgen Klopp began with both of them, along with Salah and Sadio Mane in an initial 4-2-4 formation.

“Obviously a little surprise for the opponent the different system,” Klopp said. "We won balls, broke through and had counterattacking moments — so many — but we didn’t finish it off.

“That is a little bit of a shame. It was a tough decision to change the system before we play City just because, if we lose, the boys might think it wouldn’t have happened in the other system. But the boys are ready to listen, adapt and perform."

And it was a strong performance to start with, aided by Kyle Walker’s clumsy foul on Mane conceding the penalty converted by Salah in the 13th minute.

But it was Walker who helped to instigate the leveler by passing to De Bruyne, who on the turn released Gabriel Jesus. The Brazil forward then swiveled and flicked the ball past Trent Alexander-Arnold and poked it into the net in the 31st minute.

The latest harsh penalty call for handball gave Liverpool a chance to take the lead when De Bruyne’s cross hit Joe Gomez's arm. But the Belgian became the first player to completely miss the target from a Premier League penalty since 2018 — pre-pandemic times when stadiums were not empty.

The miss didn't dampen Gomez's frustration that the penalty was given.

“I think everyone knows the power De Bruyne can hit the ball with,” Gomez said. “In that moment I am running towards goal, I am not going to put my hand behind my back. I am not going to dispute the ball hitting my hand, but I have not made an attempt to try and handball it."

Both managers were united in their irritation about not being allowed to make more substitutions. Even though neither used all three changes available to them, both clubs want Premier League rivals to approve five being used again — as happened for the restart in June after the pandemic shutdown last season.

“Look, international English player (Trent) Alexander-Arnold is injured," Guardiola said of the Liverpool defender forced off in the second off. "All around the world is five substitutions, but here we believe we are more special people and in this league it is just three, so we don’t protect the players.

“That is why it is a disaster, with this calendar we have come from, especially the year before."