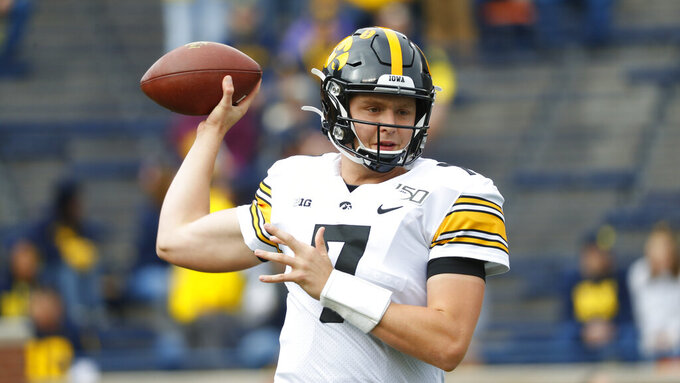 IOWA CITY, Iowa (AP) — Sitting down for a Zoom news conference with his slightly red goatee, Spencer Petras cracked a smile and professed his love for the Grateful Dead.

“I’ve tried to get some guys on board (with Grateful Dead),” Petras said, laughing. “I know Tyler Linderbaum likes the studio version of ‘Casey Jones,’ that kind of thing. I haven’t gotten him in too deep, yet… I’m working on it.”

Converting offensive linemen like Linderbaum and other teammates to the Deadhead way of life isn’t Petras' top priority now because on Oct. 24 he make his first career start as Iowa's quarterback with a game at Purdue.

The sophomore, like all players around the country, didn’t have a typical offseason. The pandemic eliminated the Hawkeyes' spring practices, so Petras and a group of his wide receivers took matters into their own hands.

“We went to local high schools and threw routes three, four times a week,” Petras said. “For the majority of the time, we have four or five guys, sometimes six, that were in town. That was how we continued to get better. We tried to make the best out of a tough situation.”

It was a no substitute for live action in the spring, but it helped in terms of repetition and bonding.

“Spencer, he’s been clicking with all the wide receivers,” wideout Brandon Smith said. “We definitely have a strong chemistry.”

Petras finds himself in an ideal spot among an established receiving group. Iowa returns 95% of its pass-catching production from 2019. Wide receivers Ihmir Smith-Marsette, Tyrone Tracy Jr., Nico Ragaini and Smith are back along with tight end Sam LaPorta .

“It’s going to be great,” Petras said. “We’ll have to see how it comes together on Oct. 24, but I have high expectations for this offense. It’s my job to make sure this doesn’t go to waste.”

Hawkeyes fans haven’t been able to see much from Petras outside of mop-up duty the past two seasons, but judging by what he accomplished in high school, the potential is there. As a senior at Marin Catholic High in 2017, Petras threw for 4,157 yards and 50 touchdowns, shattering program records previously held by current Los Angeles Rams QB Jared Goff.

“(Petras is) a hold-your-breath kind of guy with that arm he has,” Marin Catholic coach Mazi Moayed said. “He’s got a good mind to go with it. He’s exciting to watch. You feel like a big play is about to happen. He can paint the sideline from the far hash with his arm. There are not many spots on the field that are off-limits for him, as far as throwing. If you have weapons and a guy like Spencer, everyone becomes relevant.”

Petras still needs to prove himself at the college level, though. He succeeds Nate Stanley, a three-year starter who led the team to 27 wins and a 3-0 record in bowl games.

What he’s already proven, aside from his unwavering love for the Dead, is his ability to galvanize his teammates.

“He’s like an energy ball,” Iowa running back Mekhi Sargent said. “It’s contagious when you’re around him. Guys gravitate toward his leadership. That’s one thing about Spencer. He brightens up the whole room. He’s going to have a huge role this year, and I think he’s done a pretty good job.”