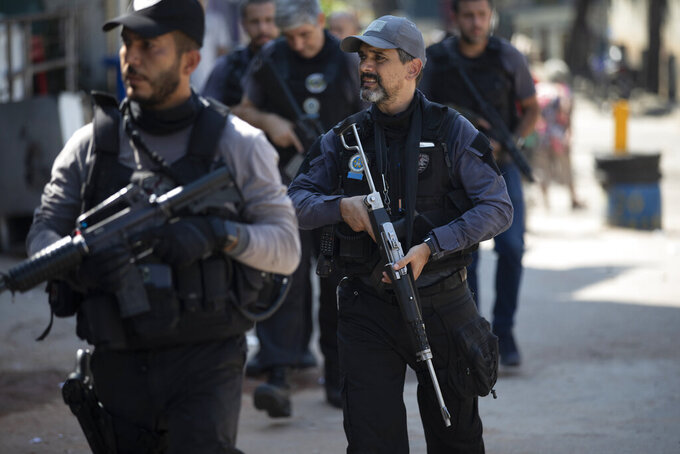 It was just after sunrise Thursday when dozens of officers from Rio de Janeiro state’s civil police stormed Jacarezinho, a favela in the city’s northern zone. They were targeting drug traffickers from one of Brazil’s most notorious criminal organizations, Comando Vermelho, and the bodies piled up quickly.

When the fighting stopped, there were 28 dead — one police officer and 27 people described by the police as “criminals.” A day after the raid, Rio police had identified the 48-year-old officer who died, but none of the others killed in the operation.

Rio's moniker of “Marvelous City” can often seem a cruel irony in the favelas, given their violent conflicts, stark poverty and subjugation to drug traffickers or militias. But even here, Thursday’s clash was a jarring anomaly that analysts declared one of the city's deadliest police operations ever.

And it was by far the most violent since Brazil’s Supreme Court issued a ruling banning most such actions during the pandemic, which drew a rebuke from the U.N.'s human rights office.

Supreme Court Justice Luiz Edson Fachin responded to the operation with a letter to federal and local prosecutors Friday expressing concern about a possible “arbitrary execution” in the case, based on a video he had seen. “I request to keep informed about measures taken and about the responsibilities of the involved,” he said.

The bloodshed also laid bare Brazil’s perennial divide over whether, as a common local saying goes, “a good criminal is a dead criminal.” Fervent law-and-order sentiment fueled the successful presidential run in 2018 by Jair Bolsonaro, a former army captain whose home is in Rio. He drew support from much of society with his calls to diminish legal constraints on officers’ use of lethal force against criminals.

The administration of Rio state's Gov. Cláudio Castro, a Bolsonaro ally, said in an emailed statement that it lamented the deaths, but that the operation was “oriented by long and detailed investigative and intelligence work that took months.”

Television images showed a police helicopter flying low over the Jacarezinho favela as men with high-powered rifles hopped from roof to roof to evade officers.

One resident told The Associated Press that a man barged into her home around 8 a.m. bleeding from a gunshot wound. He hid in her daughter’s room, but police came rushing in right behind him.

She said that she and her family saw officers shoot the unarmed man.

Hours later, his blood was still pooled on her tile floor and soaked into a blanket decorated with hearts.

On Friday, protesters gathered outside police headquarters near Jacarezinho to denounce the violence, holding a banner that read “STOP KILLING US!”

Felipe Curi, a detective in Rio’s civil police, denied there were any executions.

“There were no suspects killed. They were all traffickers or criminals who tried to take the lives of our police officers and there was no other alternative,” he said at a news conference.

Curi said some suspects had sought refuge in residents' homes, and six of them were arrested. Police also seized 16 pistols, six rifles, a submachine gun, 12 grenades and a shotgun, he said.

Bolsonaro’s son Carlos, a Rio city councilman who is influential on social media, supported police. He expressed condolences to the family of the fallen officer on Twitter, while skipping any mention of the other 27 dead or their families.

The president didn’t refer to the incident at all Thursday night in his weekly live broadcast on Facebook. His vice president, Hamilton Mourão, told local media on Friday in capital Brasilia that it is unfortunate that “true narco-guerillas” retain control over areas in Rio.

“That is the absence of a government that offers education and jobs, the cause of a great deal of violence,” said da Silva, who is widely expected to mount a challenge to Bolsonaro’s reelection bid next year.

“Even if the victims were suspected of criminal association, which has not been proven, summary executions of this kind are entirely unjustifiable,” said Jurema Werneck, Amnesty’s executive director in Brazil.

The Rio state prosecutors’ office said in a statement to the newspaper Folha de S.Paulo that it would investigate accusations of violence, adding that the case required a probe that is independent from police.

The order came after police fatally shot a 14-year-old in a home where there was no indication of any illegal activity. The teen’s death sparked a Brazilian iteration of Black Lives Matter protests held across the city’s metropolitan area for weeks.

The spokesperson for the U.N.’s human rights office, Rupert Colville, told reporters on Friday that it was “particularly disturbing” that the raid took place while the court's ruling remains in force.

The ruling caused a decline in police operations throughout the middle of last year, as reflected by a plunge in the number of shootouts reported by Crossfire, a non-governmental group that monitors violence, and in official state data on deaths resulting from police intervention. But both indicators have crept back up to around pre-pandemic levels.

The Candido Mendes University’s Public Safety Observatory said Rio police killed an average of more than five people a day during the first quarter of 2021, the most lethal start of a year since the state government began regularly releasing such data more than two decades ago.

“We remind the Brazilian authorities that the use of force should be applied only when strictly necessary, and that they should always respect the principles of legality, precaution, necessity and proportionality,” Colville said in Geneva. “Lethal force should be used as a last resort.”