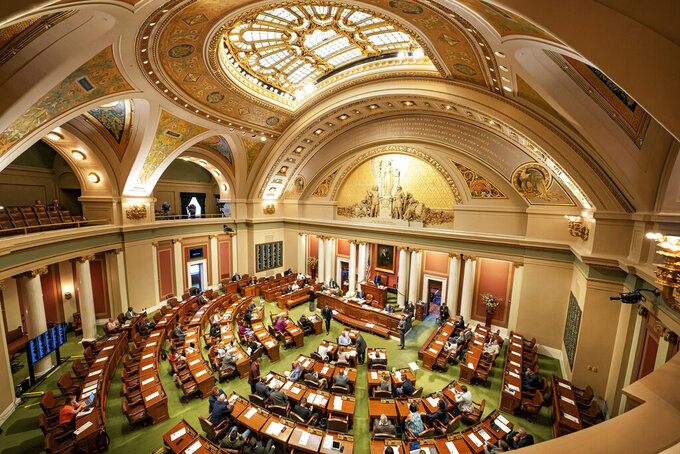 MINNEAPOLIS (AP) — The Minnesota Legislature moved forward on several major budget bills Tuesday after leaders broke a standoff on environment funding that could have shut down state parks before the Independence Day holiday weekend.

The House Ways and Means committee voted Tuesday to send the environment budget to the floor for a final vote after Republicans on Monday dropped their demand that Democratic Gov. Tim Walz abandon his effort to encourage a switch to electric cars. The bill funds the Department of Natural Resources, including the state park system, the Minnesota Pollution Control Agency, the Minnesota Zoo, and other programs.

The legislation is one of several bills making up a $52 billion two-year budget that lawmakers must pass before July 1 to avert a partial government shutdown. With little ado, the Senate sent an agriculture budget bill to the governor on a 63-3 vote Tuesday. Bills passed earlier to fund higher education and projects financed through the state's Legacy Amendment also await the governor's signature.

Deals on most of the other budget bills are now coming together, too, including an agreement announced Tuesday on a K-12 education bill that is one of the largest pieces of the budget. It includes increase in per-pupil funding of 2.45% in the first year and 2% in the second.

Some of the toughest unresolved disputes involve the public safety budget, and whether to include new police accountability measures on top of those passed last summer following the death of George Floyd. Another has been whether to curtail Walz’s reliance on emergency powers to manage the pandemic.

On a 45-21 vote Tuesday, the Senate passed a jobs budget bill and sent it to the House after Republicans beat back an attempt by Democratic Sen. Karla Bigham, of Cottage Grove, to restore language to require oil refineries to employ only skilled and highly trained workers. Her amendment was aimed at the Marathon refinery in St. Paul Park, where some 200 Teamsters have been idled since January in what the union calls a lockout and the refinery calls a strike. One of the main issues is the use of nonunion contract workers.

The Senate approved Bigham’s amendment 50-17 on Friday, with several Republicans switching their “no” votes to “yes” when it became clear that it would pass. But GOP lawmakers regrouped. The amendment was later stripped out in committee, and her effort to restore the safety language failed Tuesday on a 32-34 party-line vote.

Republican Senate Majority Leader Paul Gazelka, of East Gull Lake, disclosed during the debate that a deal has been reached for over $200 million in bonuses for essential workers affected by the COVID-19 pandemic. He declined to give details pending an official announcement, but indicated it would stay separate from the jobs bill.