`Death By Racism': Part of America's DNA from the start? 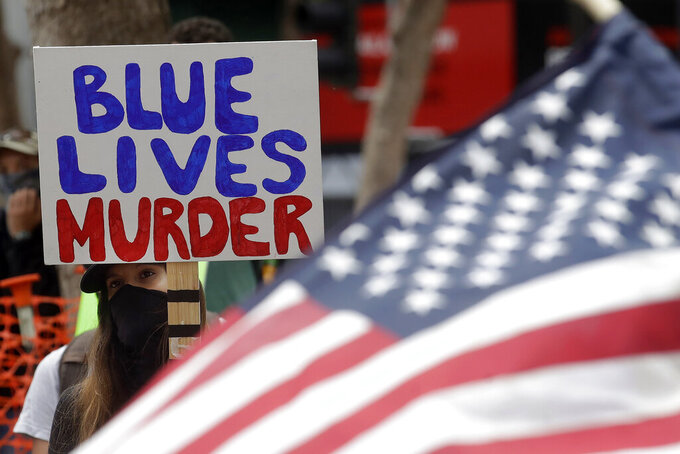 A woman holds a sign at a protest over the Memorial Day death of George Floyd, a handcuffed black man in police custody in Minneapolis, in San Francisco, Saturday, May 30, 2020. (AP Photo/Jeff Chiu)

Imagine, for a moment, that you are a black man or woman living in America in 2020. How could you not believe that racism kills?

If you are black, you need not imagine anything. You know it very well.

You don’t need to see the video of George Floyd, a police officer’s knee on his neck as he struggled for his dying breaths, to know that black people are three times more likely to be killed by police than are white people.

You don't need to hear the racial statistics on COVID-19 to know that black people have been affected disproportionately -- the same is true of eight of the 10 leading causes of death in the United States. Even before the pandemic, black life expectancy was 3½ years shorter than white.

Many blacks are redlined into densely packed, crime-ridden urban areas. Stuck in underfinanced, substandard schools. Subjected to silent environmental catastrophes, like lead hidden in pipes and on walls.

“It’s not just how could you not believe that racism is killing you if you are black,” said Brittany Packnett Cunningham, founder of Campaign Zero, which fights police brutality. “How could ANYBODY not realize the lethal nature of racism?”

This is all true 401 years after the arrival of the first slaves on these shores, 155 years after they were emancipated, more than five decades after the passage of the voting rights acts. If whites are surprised, Cunningham said, it is only because they view the world through rose-colored, Caucasian glasses.

“I think white people were spared the truth of what was happening so they could believe there was progress being made,” she said.

But recent events like the deaths of George Floyd in Minneapolis and of Ahmaud Arbery, a 25-year-old black man chased and killed by armed white men as he jogged through a south Georgia neighborhood, could not be ignored. Especially because there was video.

“There’s something about seeing a dead body on the ground,” said Rashawn Ray, a sociology professor at the University of Maryland and fellow at The Brookings Institution.

Ray said black people are often victims of over-policing. For example, he said, 80 to 90 percent of the arrests for breaking social distancing rules in New York City were of blacks or Latinos.

And these encounters often escalate. He cited the incident last week involving a white woman in New York’s Central Park and a black birdwatcher who complained that her dog was not leashed. She told him she was going tell the police that “an African-American man is threatening my life.”

Police came and left without incident. But Ray said he could easily imagine a scenario where they believed the white woman, not the black man, and the situation deteriorated. “It ends with George Floyd,” he said.

For many blacks, the line between police brutality and their sufferings in the COVID-19 pandemic is not a tenuous one. An Associated Press analysis of state and local data showed black Americans are dying at a far greater rate than would be expected, given their share of the population.

Pre-existing conditions in the black population have been cited, but Ray said those conditions often can be blamed on circumstances beyond their control -- poverty, environmental ills, a lack of green space for exercise and of decent grocery stores that offer healthy foods.

As “essential,” low-paid workers, they had to labor through the pandemic, often with little protection. But when they got sick, they were not so essential. A study found that black people seeking testing or treatment for COVID-19 were six times more likely to be turned away than whites, Ray said.

He said they’ve had to rely on a health care system that has long failed them: fewer and more distant hospitals, urgent care centers and specialists, and pharmacies that are understaffed and understocked.

How bad is black health care? In a 2010 study, sociologist Evelyn J. Patterson found that while prison generally shortened the lives of white inmates, incarcerated black prisoners had lower death rates than those on the outside. Mostly, she concluded, it was because they received better health care there.

None of this is new. The statistics on black mortality, the accounts of black killings at the hands of the police and others, have played out over generations, not weeks.

The Rev. William J. Barber II, co-chair of the Poor People’s Campaign: A National Call for Moral Revival, said “death by racism” goes back to the founding of the country. It is “a wound,” he said, that has caused untold suffering over the centuries.

“We only discuss it and deeply probe it at a moment like this,” he said.

Heartened by the outrage shown by people of all races after Floyd’s death, he also sees this as a moment when change is possible.

He is planning a virtual assembly and march on Washington for June 20. He will continue to call out President Donald Trump: “Every time he opens his mouth, he spreads racism.” He has redoubled his efforts against voter suppression; by reducing black representation, he said, politicians are preventing blacks from gaining the power they need to turn the fatal, racist tide.

“There comes a time in every generation when the wound becomes so infested that the body politic cannot stand it,” he said. “I pray that this is one of those moments.”