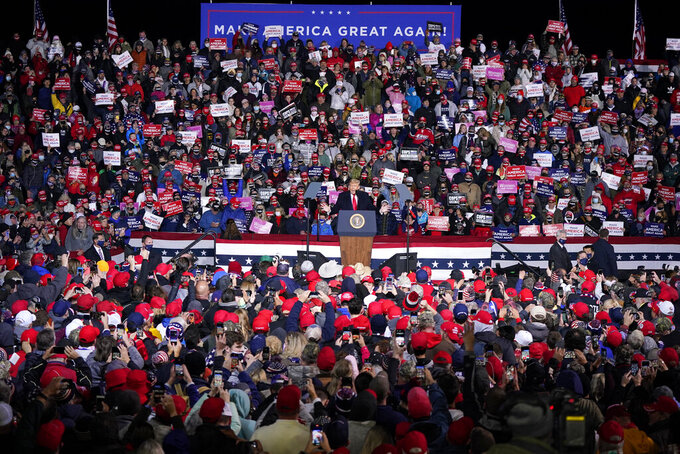 ERIE, Pa. (AP) — President Donald Trump pushed into arguably the most important state on the electoral map on Tuesday, opting for a rally in Pennsylvania instead of formal debate practice two days ahead of the final presidential debate that may be his last, best chance to alter the trajectory of the 2020 campaign.

Democrat Joe Biden took the opposite approach, holing up for debate prep in the leadup to Thursday's faceoff in Nashville. But Trump, trailing in polls in most battleground states, continued his travel blitz in the race's final fortnight, and delivered what his campaign has wanted to be his closing message.

“This is an election between a Trump super recovery and a Biden depression. You will have a depression the likes of which you have never seen,” the president said in Erie. “If you want depression, doom and despair, vote for Sleepy Joe. And boredom."

But the president's pitch that he should lead the rebuilding of an economy ravaged by the pandemic has been overshadowed by a series of fights. In the last two days he has attacked the nation's leading infectious disease expert and a venerable TV newsmagazine while suggesting that the nation was tired of talking about a virus that has killed more than 220,000 Americans.

Before leaving the White House, Trump taped part of an interview with CBS’ “60 Minutes” that apparently ended acrimoniously. On Twitter, the president declared his interview with Lesley Stahl to be “FAKE and BIASED,” and he threatened to release a White House edit of it before its Sunday airtime.

Also trailing in fundraising for campaign ads, Trump is increasingly relying on his signature campaign rallies to deliver a closing message to voters and maximize turnout among his GOP base. His trip Tuesday to Pennsylvania was one of what is expected to be several to the state in the next two weeks.

“If we win Pennsylvania, we win the whole thing," Trump said in Erie.

Erie County, which includes the aging industrial city in the state’s northwest corner, went for President Barack Obama by 5 percentage points in 2012 but broke for Trump by 2 in 2016. That swing, fueled by Trump’s success with white, working-class, non-college-educated voters, was replicated in small cities and towns and rural areas and helped him overcome Hillary Clinton’s victories in the state’s big cities.

But Trump will likely need to run up the score by more this time around as his prospects have slipped since 2016 in vote-rich suburban Philadelphia, where he underperformed by past Republican measures. This raises the stakes for his campaign’s more aggressive outreach to new rural and small-town voters across the industrial north.

His aides worry that his opponent is uniquely situated to prevent that, as Biden not only hails from Scranton, but has built his political persona as a representative of the middle and working classes.

Trump, who spoke for less than an hour, showed the crowd a video of various Biden comments on fracking in a bid to portray Biden as opposed to the process. The issue is critical in a state that is the second leading producer of natural gas in the country. Biden’s actual position is that he would ban new gas and oil permits, including for fracking, on federal lands only. The vast majority of oil and gas does not come from federal lands.

Three weeks of wrangling over the debate format and structure appeared to have subsided Tuesday after the Commission on Presidential Debates unveiled a rules change meant to reduce the chaotic interruptions that plagued the first Trump-Biden encounter last month.

This time, Trump and Biden will each have his microphone cut off while his rival delivers an opening two-minute answer to each of the six debate topics, the commission announced. The mute button won't figure in the open discussion portion of the debate.

Trump was to have been joined in Erie by first lady Melania Trump, in what was to be her first public appearance since she and the president were sickened with COVID-19. But her chief of staff, Stephanie Grisham, said Tuesday that Mrs. Trump has a lingering cough and would not accompany the president.

As Trump was on the road, Biden was huddling at his lakeside home in Wilmington, Delaware, with senior adviser Ron Klain, who is in charge of debate preparation. Also on hand: a group of aides that the campaign has purposely kept small to reduce the risk of spreading the coronavirus.

Biden, who taped his own interview with “60 Minutes” on Monday at a theater near his home, had no public events Tuesday or Wednesday and wasn’t scheduled to travel — except to the debate itself — on Thursday. His running mate, California Sen. Kamala Harris, was out campaigning, and he was expected to receive a late boost from former President Barack Obama, who was to host an event Wednesday in Philadelphia.

Biden is now tested about every two days for the coronavirus and has never been found to be positive. He suggested before last week’s planned second debate in Miami that the proceedings shouldn’t happen if Trump was still testing positive for COVID-19 after contracting the virus earlier in the month.

The candidates instead held dueling town halls on separate networks after the commission said the debate should occur virtually, citing safety concerns, and Trump rejected the idea.

Biden has been tightlipped about his preparation for the Nashville debate, saying only that he has focused on watching Trump’s past statements on key issues. Biden’s advisers see the final debate as a chance to discuss foreign policy, which they see as one of their candidate’s strengths. Biden has praised the Trump administration for helping to broker deals that the Gulf states of Bahrain and the United Arab Emirates signed recognizing Israel, but otherwise has accused the president of shunning allies and making foreign relations more volatile at most points around the globe.

The debate comes as Trump is again defending his handling of the coronavirus pandemic that has killed more than 220,000 Americans and attacking his Democratic rival for pledging to heed the advice of scientific experts.

Trump insisted Tuesday that he gets along with Dr. Anthony Fauci, the government's top infectious disease specialist, while also complaining on “Fox & Friends” that the doctor, who has clashed with him at times over the coronavirus, is not a “team player.”

A day earlier, Trump said on a call with campaign aides that “People are tired of hearing Fauci and all these idiots," adding of the doctor: “Every time he goes on television, there’s always a bomb. But there’s a bigger bomb if you fire him. But Fauci’s a disaster.”