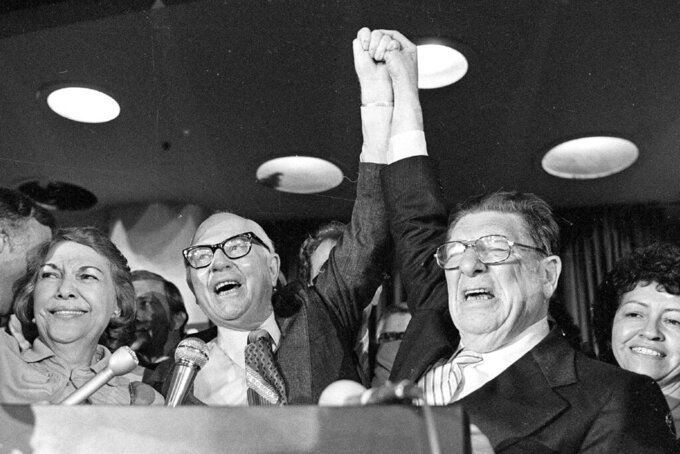 FILE - In this June 7, 1978 file photo, Paul Gann, left, and Howard Jarvis, right, celebrate as their co-authored tax initiative Proposition 13 takes a commanding lead and ultimately won in the California primary in Los Angeles. California Gov. Gavin Newsom announced Monday, May 10, 2021, he plans to send money back to most state taxpayers because the state is projected to exceed a voter-approved limit on appropriations for only the second time ever. The limit is named after Paul Gann, a conservative activist who died in 1989 who campaigned for the limit. (AP Photo/File)

SACRAMENTO, Calif. (AP) — If California Gov. Gavin Newsom avoids getting recalled from office later this year, he could owe a debt of gratitude to a conservative Republican political activist from the 1970s and 1980s.

It was Paul Gann who led the 1979 campaign that convinced voters to put limits on government spending. When the limit is exceeded, money gets returned to taxpayers.

That threshold has been reached only once — in 1987, when $1.1 billion was returned. And now it’s happened again and the return is much larger.

On Monday, the Newsom administration announced California would soar past the limit by an astonishing $16 billion. The governor proposed what he called the largest state tax rebate in history, guaranteeing payments of up to $1,100 to people who earn up to $75,000 per year, or roughly two-thirds of the state’s adult population.

“I’m about to make an announcement no other governor in California history has ever made and I would argue no governor in American history is ever made: Today we’re announcing a $75.7 billion budget surplus,” Newsom said during a news conference in Oakland. “Because of this announcement, two-thirds of all Californians will benefit from this stimulus. That’s roughly $12 billion.”

The timing couldn’t be better for Newsom, who is facing a recall election later this year fueled by anger over his handling of the pandemic. But it was that same pandemic that has contributed to the state soaring past the limit, ensuring the government would have to eventually act.

It's likely Newsom would have proposed this spending even without the Gann limit, especially given the outsized impact of the pandemic on lower and middle income families. Newsom would not be required to act on the limit for another two years — which is how long it will take for state officials to precisely calculate the limit and how far the state had exceeded it.

Newsom decided not to wait and proposed the state go ahead and give the money back this year, structuring it in such a way to benefit middle-income families and immigrants living in the country illegally. Still, Keely Martin Bosler, Newsom's director of the state Department of Finance, said she believes the proposal satisfies the Gann limit requirements.

The limit applies a formula designed to keep spending below 1978-79 levels, adjusted for a number of factors including population growth and inflation. California lost population last year for the first time ever, a result of more deaths because of the coronavirus, a declining birth rate and more people leaving the state than coming here.

Meanwhile, inflation is low and government revenue is surging because the state's richest residents got richer during the pandemic, pouring money into the state treasury at such a pace that the state has so far collected about $16.6 billion more than they had predicted so far this year.

“This is unchartered territory,” Bosler said.

Monday’s news has thrust the Gann limit into the spotlight, a law that was part of the taxpayer revolt of the 1970s. Most California homeowners know about Proposition 13, the 1976 initiative that placed limits on property tax increases. Gann helped that law pass, too. But it his more gregarious colleague, Howard Jarvis, who gets most of the attention for that law to this day.

While Proposition 13 would go on to shape government spending for generations, the Gann limit fell into obscurity as it was so rarely used. The only other time it was used was in 1987, when the state had $1.1 billion in excess revenue and former Republican Gov. George Deukmejian returned the money to taxpayers.

Since then, voters have amended the limit twice, making it harder for the state to surpass it. That's why Jon Coupal, president of the Howard Jarvis Taxpayers Association, argued Newsom shouldn't get all the credit for his proposal to return some of the money.

Chris Hoene, executive director of the progressive California Budget & Policy Center, criticized the Gann limit, saying it is absurd that “the California of today is locked in place to a spending level that is from a state that in 1978-79 was a very different place.”

“It makes compete sense to me the governor would provide direct cash assistance on a temporary basis to people and households most harmed by the pandemic,” he said.

This story corrects the spelling of Bosler on second reference.