Defense ahead of the offense early in ACC season 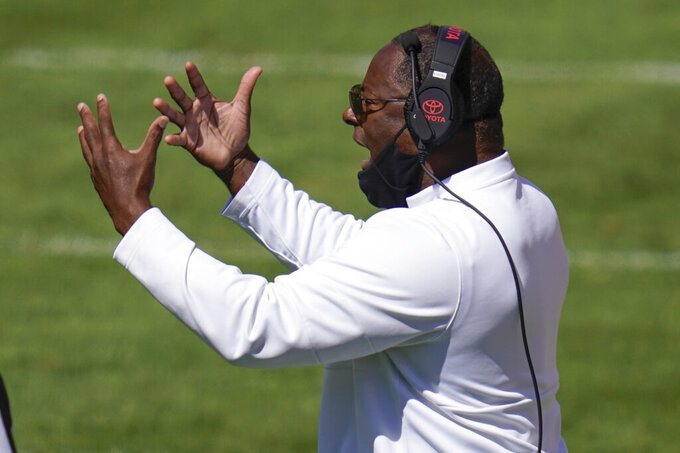 Syracuse head coach Dino Babers calls out to his team during the first half of an NCAA college football game against Pittsburgh, Saturday, Sept. 19, 2020, in Pittsburgh. Pittsburgh won 21-10. (AP Photo/Keith Srakocic)

Defense seems to have the early edge in the Atlantic Coast Conference after the start of this pandemic-affected college football season.

There are 11 ACC teams among the top 40 in defense nationally, and that’s with Virginia and Virginia Tech sidelined so far due to COVID-19 postponements. Still, the ACC is off to a quick start in getting after offenses with No. 21 Pitt leading the way.

The stingy Panthers are giving up 154 yards and five points a game in their 2-0 start are ranked third nationally on defense. No. 11 North Carolina is close behind at fifth while top-ranked Clemson is ninth in the country to give the ACC three in the top 10.

It's nearly double the six Big 12 teams — the only other Power Five conference that has played so far — in the top 40 and an indicator that ACC teams stayed disciplined and focused during the uncertainties of summer camps filled with questions about coronavirus.

Even with all the impressive stats, Pitt coach Pat Narduzzi isn't buying any defensive dominance just yet. He's just glad his team is performing well, but can't crown anyone as a finished product in this odd season.

“All that stuff, you can’t compare it to normal years,” said Narduzzi, whose Panthers rank only behind Oklahoma and BYU in defense. “You can go say, ‘We’re No. 1 in rush defense, No. 1 in passing offense.’ Right now, what does it matter? How many teams aren’t even playing?”

Fair point, although that number is going up in the weeks to come. The defensive-focused Southeastern Conference starts Saturday while the Big Ten, also know for punishing defenses, expects to start the weekend of Oct. 23-24.

Still, there have been plenty of dominating defensive showings in the ACC so far.

Pitt and Clemson are tied for fourth with 10 sacks through two games. Duke may be 0-2, but it's in the top 10 nationally with nine sacks.

“We like to get after it,” Clemson defensive tackle Jordan Williams said.

That's certainly part of it.

Syracuse coach Dino Babers said defensive effort can overcome individual mistakes — something near impossible to do on offense.

“When you're on the defensive side, you can get one guy do it wrong, but if the quarterback doesn't find that one guy, then because of effort and flying to the football, you can cover up a mistake,” he said.

On offense, if a player makes a mistake before the snap, Babers continued, “all of a sudden everything breaks down.”

Mark Herzlich, ACC Network analyst who played linebacker at Boston College, agrees defense is usually ahead early on. To keep that going, schools must keep finding ways to build depth quickly amidst the continuing pandemic.

Lose a couple of key players and potentially lose a shot at an ACC title.

The unknowns ahead “are something that could get really frustrating for players as we continue,” he said.

There's also something to be said for maintaining focus in an unprecedented situation, according to Clemson coach Dabo Swinney.

His players had COVID-19 issues when the Tigers returned to campus in June for offseason workouts. But once the reality set in that college football could be in jeopardy, Swinney said players locked into what it took to stay healthy and safe.

“They understand what they have to do to play the game they love,” he said.

Clemson has kept churning defensively despite affects from the virus. Expected defensive end starters Xavier Thomas and Justin Foster have not played this season due to illness. Starting cornerback Mario Goodrich has also not played while in protocol.

Duke defensive tackle Ben Frye thinks his teammates had enough meeting time and practices to be ready for the season.

"We had a good camp even though it was interrupted and different,” Frye said. “I think we still got the same amount of work in.”

Pitt's Narduzzi won't worry about the why — only how he can keep things going throughout the season.

Two games don't matter, he said, “it matters what we do after 11 (games), championship game, bowl game, whatever you end up getting to."

AP Sports Writers Aaron Beard in Raleigh, North Carolina; John Kekis in Syracuse, N.Y.; and Will Graves in Pittsburgh contributed to this report.